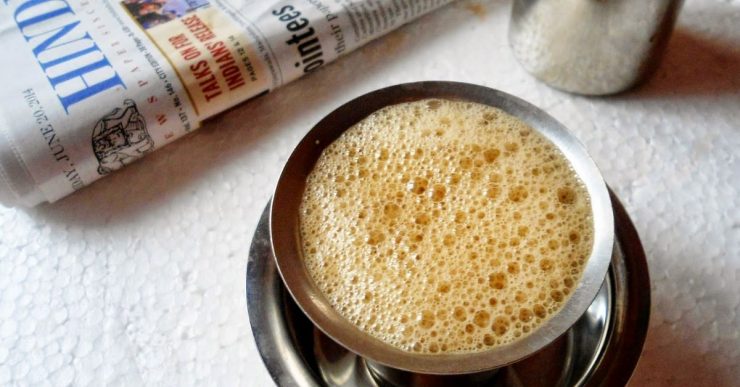 Like in many South Indian households, one will always find two things in my home — dosa batter and filter kaapi.

The latter is no less than an ‘on’ switch for the day, and watching the coffee brew — as the black-brown of the fresh concoction mingles with the white of the boiling hot milk to form just the right shade of brown — is a kickstart to most of my days.

Today, filter kaapi has become an integral part of many Indian households, to the extent that true connoisseurs cannot imagine starting their day without it. But the origin story of this drink takes us far away from India.

According to common folklore, India’s tryst with coffee began in the early 17th century, when Baba Budan, a Muslim saint from Chikmagalur, smuggled in seven coffee beans from present-day Yemen while returning from Hajj. The use of the word ‘smuggled’ is intentional as in those days, it was considered illegal to transport green coffee beans out of the Arabian Peninsula. This was to ensure that the region continued to have a monopoly on its trade.

Baba Budan managed to bring it to Chikmagalur in India and began growing the crop. Firstpost writes, “Qahwakhanas (coffee houses) were soon established, and many upper-class Indians took to the drink. In fact, across the Islamic empires of the world at that time, coffee was the beverage of popular choice.”

The rest, as they say, is history. Chikmagalur, known as the birthplace of coffee in India, produces almost 34 thousand metric tonnes of Arabica coffee beans per annum.

In Southern India, coffee was popularised by the British sometime in the 1800s, writes NDTV Food. A British manager named J H Holly first realised how conducive the climatic conditions of the region were to growing coffee, and convinced the king of Mysore to give away some land in return for a share of profits. From here, it slowly began to be exported to Europe, while some was left behind to be consumed by the so-called elites in India.

Tamil historian A R Venkatachalapathy said, “The incursion of coffee into Tamil society was marked by a cultural anxiety which was matched only by the enthusiasm with which it was consumed.” He also noted that many believed that the drink would lead to “westernised behaviour” and “addiction”, but ultimately, its popularity emerged victorious.

Meanwhile, NDTV Food notes that to emulate those higher on the social hierarchy, more and more people began consuming coffee, replacing the kanji, a nutritious mix made of leftover rice or millets.

Coffee gained nationwide popularity some time in the mid 1940s, with the Coffee Board of India establishing the Indian Coffee House.

According to an article in The New Indian Express, Indians were not permitted in many coffee houses. It was in response to this that an “Indian coffee house” was first opened by the Coffee Cess Committee in Churchgate, Bombay [Mumbai], in 1936, and then, across the country.

However, after Independence in the ‘50s, the Coffee Board decided to close these coffee houses down. At this point, Communist leader A K Gopalan led the formation of workers’ cooperative societies to take over and run these coffee houses. This was how The Indian Coffee House (ICH) was born. As branches of ICH began spreading across India, coffee’s popularity only grew stronger.

The Indian filter coffee is commonly known as filter coffee, degree coffee, Mysore filter coffee or Kumbakonam coffee. Most variations of the name depend on the method used to make the coffee.

Rakesh Raghunathan, a food historian and raconteur based in Chennai, recalls his grandmother’s technique of making filter kaapi. “Way before all these electronic coffee machines made their way into our homes, my paati (grandmother) would painstakingly make her own coffee powder and then the decoction. First, she would roast the coffee beans. Next, she’d grind them in her hand grinder till she achieved the desired level of coarseness. Then, she’d collect this power and heap it into a thin muslin cloth,” he tells The Better India.

He continues, “She’d pour hot water and the decoction would percolate. This would then be used to make the perfect cup of filter kaapi.”

Rakesh says, “There are several stories as to why it is referred to as degree coffee. While some say it has to do with the temperature to which the milk is boiled, others say it comes from the degree to which the water is boiled. However, it is none of this.”

Now that you know how filter coffee became so popular in Indian households, how about brewing your own cup?

· You will need good quality coffee powder, milk (fat percentage can be your choice), and sugar.
· Once you have made the decoction, take a steel davara (glass). Add 1/4th portion of decoction to this. The boiling milk will fill the remaining 3/4th of the davara.
· If you wish to add sugar, do so at this stage.
· Swish the coffee around and allow the sugar to dissolve into the milk and decoction well.
· Consume hot.

A Brief History of South Indian Filter Coffee by Sridevi Nambiar
Production volume of Arabica coffee in Karnataka India FY 2022, by district published by Statistica Research Department
Story of Indian Filter Coffee by Amit B
Brew Me a Story by Uma Mahadevan Dasgupta
What Degree is Your Coffee by Narayani Menon
Filter Kaapi is delicious and everyone should know it by Niketha Venugopal
Filter Coffee: Is the traditional hot brew losing its popularity in South India by Meher Mirza