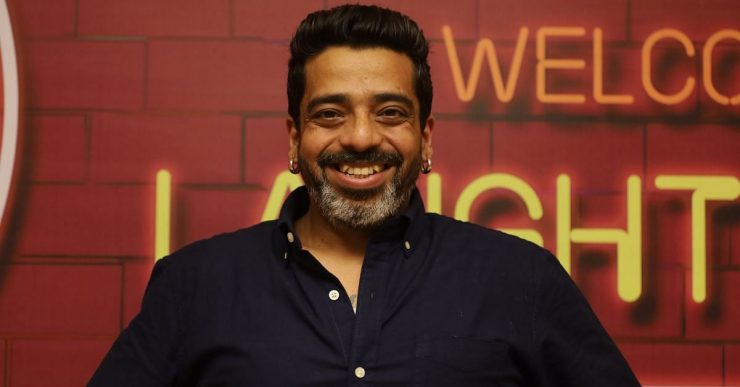 “I learnt how to laugh at myself early on in life,” begins stand-up comic Jeeveshu Ahluwalia.

From selling biscuits, incense sticks and juice packets door-to-door to earn Rs 30 a day to performing over 2,000 shows on stages across Singapore, Malaysia, Philippines, Italy, Australia, Sweden, Spain, China, UAE and all across India – Jeeveshu’s story is what determination looks like.

The 45-year-old has had a rather tumultuous growing up period.

“I was all of five when I lost my father. With his passing, life changed. Not just for me, but also my mother and younger brother, who was just six months old. I cannot even say that I remember my father’s face other than looking at the picture that hangs in my house,” says Jeeveshu speaking to The Better India.

While they had a house to call their own, he speaks about the kind of hardships that his mother had to endure to bring the boys up. “Inside the house there was nothing. It was just a shelter where we could rest at night. We had absolutely no amenities or gadgets inside. My mother figured out that money is an important aspect of life and she worked hard to get it,” he says.

‘My Mother Has Had a Strong Influence on Me’

“My mother, Asha Ahluwalia, is highly educated. She had a Bachelor of Arts (BA), double Master of Arts (MA) and also a Bachelor of Education (B.Ed.) degree. Despite all this, she had to take up odd jobs, which included working as a receptionist, working at the gift emporium, etc. All this because she was over a certain age and no good jobs came her way,” says Jeeveshu.

Jeeveshu and his family lived in the Delhi Development Authority (DDA) allotted home and he says that to earn some extra money they started leasing out one room. “We would instead camp in the balcony area that was covered up. Three of us cooped up in that small area,” he recalls. The need to start earning money dawned on Jeeveshu when he was very young.

Not having money also meant that the Ahluwalia’s hardly had any friends or relatives. “We were left to our own devices. We started by spending the day at a nearby crèche but soon figured that it cost a lot of money. Then I started asking my mom to lock us inside the house, where my brother and I would be waiting for mom to return in the evening. As we grew up, the lock went away and I was put in charge of my brother, who was five years younger than me.” Jeeveshu says some of his earliest memories revolve around knocking on neighbours’ doors, asking if he and his brother could sit there since it was too hot outside or even just for a glass of cold water.

What all these experiences did was make Jeeveshu street smart.

“I learnt how to survive. I was never academically bright but somehow did not think that was important for me growing up,” says Jeeveshu.

As children, one never understands money and therefore never differentiates based on who has money and who doesn’t. Jeeveshu says that most often it is the parents who would have these notions.

‘My Brother and I were Enough For Each Other’

“Since we were two of us, a lot of what we did was together. This also meant that we would often get into trouble together,” quips Jeeveshu. Other than studying, Jeeveshu says that the two of them were notorious for all things that spelt naughty and trouble. “We were a good team. We stuck by each other and growing up in the circumstances we did was made easy because we had each other.”

Jeeveshu slowly graduated to selling nighties. He says that he would buy these for Rs 50 from Gandhi Nagar wholesale market and sell them to the women in his area. “To sell these nighties I would go to the homes where I knew the aunties. Many of them, out of embarrassment, would buy whatever I was selling. I, on the other hand, never felt any shame,” he says.

He learnt how to survive by living through these experiences.

His quest to earn never stopped and he soon opened up a comic library where he lent comics for 50 paise and digests for Re 1. “This was amongst my most failed ventures. I had invested Rs 250 to buy the books and recovered nothing close to that,” he says. While all this was happening, Jeeveshu says that his mother was very insistent on him getting through school and college.

“She [mother] always said that the one thing no one could take away from me was my education,” he says. He completed his Bachelor in Commerce (B. Com) from Deshbandhu University. While studying, Jeeveshu started working at a petrol bunk where he was selling juice tetra packets. “I was caught stealing while doing this job, was beaten and fired. That was the end of that,” he says.

Setting Myself Up For Life

Jeeveshu doesn’t shy away from speaking about his trials. He attributes all he has become today to those experiences. For one year Jeeveshu was employed by Priya Village Roadshow (PVR), one of the first multiplexes to open in India, where he worked as an usher. “I got into selling tickets in black and started making some extra money on the side. Someone told on me and I was promptly picked up by the cops, who went on to beat me up. There were close to 32 policemen who beat me,” he recounts.

With over 27 scars on his head and face, he says he went home that day bleeding from everywhere. “While this was not the first time I was being beaten, it felt different. This led me to join Pizza Hut as a delivery boy. In fact, I got the job for being honest about why I lost my previous job. I continued with this job for three years. It has been a beautiful life – it was the first time that I got to eat a pizza.”

With a salary of Rs 2,750, Jeevenshu says he was happy. “That set me up for everything else,” he says.

An accidental meeting with a friend led me to the GE call centre. “It was around this time that call centres had just begun operations in India. It was a good time and I was at the right place at the right time. Over 14 years, I worked at various call centres and got promoted as well,” he says. In his 20s, Jeeveshu also became the director of one of the largest call centres in India – Teleperformance.

There were so many first-time experiences that Jeeveshu had while working at the call centre – travelled by air for the first time, went inside the airport, visited the USA, got to spend in dollars and experienced snowfall. “Even though I was doing well, I was very cautious in spending and over the six months I was there, I managed to save Rs 1,23,456. I still have that receipt in my wallet,” he says.

‘I Went From Better to Best’

“People usually change jobs when they are unhappy with it. In my case, I loved my job. It had given me everything I had yearned for while growing up. But on 7 March 2013, I resigned to become a comedian,” he says. Up until then, Jeeveshu says that he had lived a very fulfilling life and he had a box full of stories to share. This, in his opinion, made him a good comic.

He continues, “I knew I was funny but the difficult part was the transition from a drawing-room comic to becoming a stage comic. I felt exhilarated when I was on stage. It was a feeling like no other.” Early on, as a comic, Jeeveshu would perform at various restaurants and cafes in exchange for a meal and sometimes even just a beverage. Once he managed to perform at a few places, he started charging Rs 800 a show and moved up to Rs 21,000 for a three-comic show.

“I was running close to 20 open mics a month – I was just constantly hustling. I managed to get the big names to perform with me, Amit Tandon, Neeti Palta, Zakir Khan and we would each take home Rs 7,000,” he recalls. Through all this Jeeveshu’s mother did from time to time express her concern at what he was doing. She couldn’t fathom why he would quit a well-paying job to become a comedian.

But Jeeveshu has gone on to work in over 50 television commercials and Hindi movies, which includes Tamasha (2015) and Happy Phir Bhag Jayegi (2018).

“I was always the last in getting everything — from being picked as a team member [for sports] to being invited to a party or even getting a girlfriend. From all that to now signing autographs, performing at the best venues across the globe — I feel like I have arrived,” he says.

However, even today, Jeeveshu says that he carries his visiting card in his pocket to hand over to new people he meets. “If I do not market myself, then who else will? I wish there is a day when everyone knows me and I do not have to hand these cards out. Until then, I will,” he says. “Let’s be known for who we are,” he concludes.