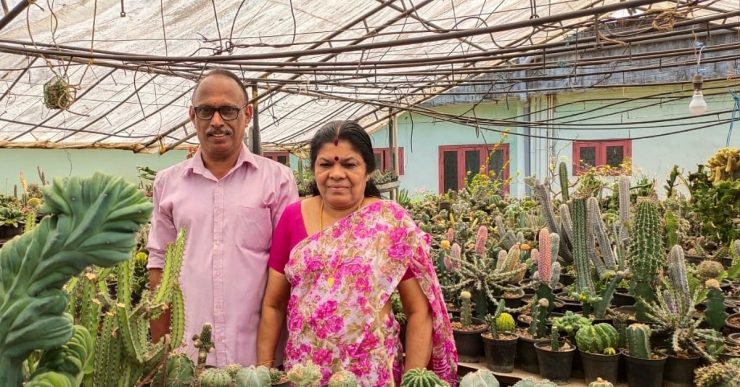 Gardening has always been a passion for E Balakrishnan from Kozhikode, Kerala, who has been growing and nurturing plants of different varieties from a very young age.

“I can’t remember a time when I wasn’t at it [gardening],” says the 67-year-old, while trying to recall when he started gardening at home.

Growing plants like different varieties of orchids, hibiscus, roses and more, turned out to be his favourite hobby while taking care of his printing press business for the past four decades.

While harbouring his love for plants and flowers, he says it was in 2015 that he decided to bring home a few varieties of cacti to maintain in his terrace garden. “Through the internet, I learnt that we could grow cacti at home. I became very curious and wanted to grow them in my garden,” Balakrishnan tells The Better India.

Eventually, after working out the ways to grow cacti at home, he started collecting varied species from different parts of the country and even from other countries like Japan, China, Indonesia, Brazil and so on.

Currently, his terrace garden has around 3,000 cacti plants, including over 500 species of cacti. Balakrishnan maintains his cacti plants on two terraces, one on his house terrace and the other on the terrace of his printing press, combined to be 2500 sqft. “Never thought that I would develop a niche hobby of collecting cacti. But I became so fascinated by these thorny plants that I wanted to fill my terrace with whatever possible varieties that I could get,” he says.

Cacti plants that thrive in dry climates of desert lands are low maintenance. He explains, “Unlike many other ornamental plants, they are easy to grow and maintain. I only water them once a week. But it is also important to make sure that there is no water retention or any kind of stagnation in the pot as that could damage the cacti. So, it is advised to plant them on soil with no water retention.”

Even though it requires very little water, he says cacti need good sunlight to have healthy growth. “However, overexposure to sunlight can also affect some varieties. So, it is advisable to grow them somewhere in a space that gets sufficient sunlight,” says Balakrishnan, adding that he has put up UV roofing on both of his terraces to protect the plants from rain and overexposure to the sun.

He adds, “I mostly use cow dung powder and coco peat as a fertiliser as well as a bone meal once in a while. Also, they have to be pruned from time to time according to their growth.”

Cacti in different sizes, shapes and colours are present on his terrace that also houses several rare and exotic varieties from different parts of the world. From one of the most common varieties of cactus — Mammillaria to Euphorbia Trigona that originates in Central Africa, his collection houses cacti in different sizes, shapes and colours.

Echinopsis, Astrophytum, Cereus, Rebutia, Caralluma are a few among the other cacti varieties found in Balakrishnan’s collection.

He has sourced many of these varieties online and imported them from different countries. “Cacti varieties such as Euphorbia abdelkuri was from Brazil, whereas the Copiapoa came from New Zealand and several other species are collected from countries like Japan, China, Indonesia and Malaysia. I had to spend thousands while importing such rare varieties,” he says, adding that these cacti varieties are also found in states like Rajasthan, Gujarat and Delhi.

Apart from collecting cacti varieties, Balachandran also grows the plants through grafting. “There are certain cacti that don’t form roots unless we graft them. I usually don’t use seeds for propagation as the seed development is tougher under Kerala’s climate,” he says.

If there are enough leftover saplings, he sells them to people who approach him or through social media platforms like Facebook. “There are certain Facebook groups where I showcase my collection and through them, I get a lot of enquiries as well as sales. The cacti are sold according to the variety. Starting from Rs 250 they go up to Rs 3000,” says Balachandran, who makes an average of Rs 15,000 per month by selling cacti.