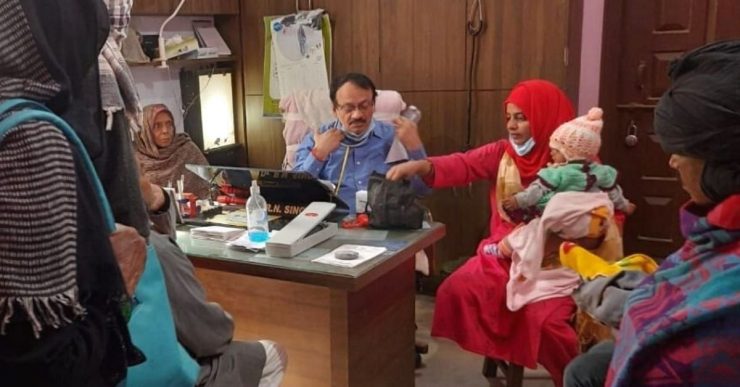 Over the years, the reports of doctors cheating patients or charging exorbitant fees for medical care have increased. Many incidents also came to light during the start of the COVID-19 pandemic with patients paying exaggerated amounts to get a bed or essential medicines.

However, a Bihar-based doctor gives us hope to revive the image of the fraternity that is deteriorating in recent times.

For the past 35 years, Dr Ramanand Singh from Barbigha village has been treating his patients for just Rs 50. He even waives off his fees in cases where the patients cannot afford medical treatment. At times, he even pays for their medicines.

An MBBS by qualification, the 68-year-old says, “My fees have been low since the day I started my medical practice. I used to charge Rs 5 while others charged 3-4 times more. But I became a doctor to serve humanity.”

Speaking with The Better India about his inspiration, he says, “My father is a farmer, and we have been practising this for generations. However, the facilities in our village during my childhood were poor. The infrastructure was in a dire state, and the residents suffered in terms of health facilities as well.”

Dr Ramamand says there were barely a couple of doctors in his village, and accessing medical services was a privilege. “The consultation fees charged by the doctors were high. Purchasing medicines only added to the expenses, as did the follow-up visits,” he says.

Describing himself as a bright student in his academic years, he said he decided to use his talent to help the poor early on. “When I had to choose higher studies, most of my fellow students were selecting a career in engineering or other fields. I decided to take a different career path. I opted to study medical sciences as it would allow me to work on the ground and directly help the people in need within my hometown. My skills and knowledge would benefit the masses in a true sense,” Dr Ramanand adds.

Dr Ramanand signed up for an MBBS course in Ranchi Institute of Medical Sciences (RIMS), Jharkhand, to follow his dream. “I was a single child, and my father earned a decent income from farming to fund my education. The fees to study medical sciences were affordable during those days. The conditions made it favourable to glide through my academic years,” he shares.

The doctor graduated in 1986 and set up a small clinic offering treatment as a general physician for Rs 5.

In the early days, Dr Ramanand worked alone attending to patients. His medical practice settled a few years later when he hired staff to assist him. He also started conducting various medical camps across the district.

During his visits, Dr Ramanand often came across patients who could not afford medical treatment. “I visited remote areas where people struggled to make ends meet. I treated them for free. On some occasions, patients returned for follow-ups, and I learned that they were not following the prescriptions as advised. When inquired, they used to inform me of being unable to afford the medical costs,” he explains, adding that it was then that he started paying for their medicinal expenses as well.

“Occasionally, I even offered money to buy them food or groceries,” he says.

Slowly, the locals learned about his philanthropic ways, and the patient flow increased.

Dr Ramanand says that his method of offering medical treatment has remained unchanged over the past three decades. His day starts at 8 am and continues until 8 pm.

Today, Dr Ramanand treats about 300 patients a day, including people from neighbouring districts like Alava, Navada, Patna, Nalanda, Jamui, Lakhsaria and others. “The patient flow is more during the winters, while it reduces by almost 40 per cent during the summer months,” he says.

Anand Kumar, one of his patients over the past 20 years, says, “There were only a couple of doctors when Dr Ramanand started his medical practice, and patients had exceptional faith in him. In 2003, I visited him to treat a skin-related ailment, and his treatment helped me recover.”

The 62-year-old adds that a few doctors in the town start the medical treatment without seeking detailed information about the health complaints from their patients. “But Dr Ramanand ensures listening carefully to all the health issues, understands the symptoms and guarantees the best line of treatment,” he adds.

‘They Have Faith in Me’

Over the past 30 years, Dr Ramanand has increased his consultation fees to Rs 50. However, they remain low compared to his competitors. His staff has increased to about 15 personnel.

However, Dr Ramanand does not believe that imposing low consultation charges or offering free medical treatment are the reasons for his patients visiting him. “If that were the case, the patients would not spend Rs 300 travelling far distances for a check-up. They surely have faith in me and benefit from my medical advice,” he adds.

The fees charged to the patients can cover the operational expenses of the clinic alone.

“I have to pay the staff and for the equipment including other maintenance. I do not earn profits from the fees and survive on the income sourced from my 5-acre ancestral farm,” Dr Ramanand says. The earnings from the farm have enabled him to educate his two sons, who have also followed in their father’s footsteps.

At times, he struggled to offer medicines to the patients and even paid from his pocket to meet the clinic operational expenses. “I faced multiple challenges, especially with money. The costs incurred in treating the number of patients was more than the clinic earned. Moreover, sourcing updated equipment and medical infrastructure in the far less developed area of the country with monetary crunches also delayed procurement and offered the best services immediately. I had no external financial support and managed alone,” he notes.

But Dr Ramanand asserts he is not after monetary gains, and treating patients gives him the satisfaction he needs. “I try to deliver to the best of my abilities. Social work has earned me respect and a reputation in society. I am glad about such non-monetary rewards,” he adds.

In light of the physical abuse of doctors, Dr Ramanand says that much has changed in his profession. “During earlier days, the patient’s kin praised or even referred to doctors as ‘gods’, especially after we saved their life. But this picture has changed today. Relatives attack doctors and staff if anything goes wrong during the treatment. The respect for doctors is lost, and I hope that my cause helps restore some lost faith towards the fraternity,” he adds.