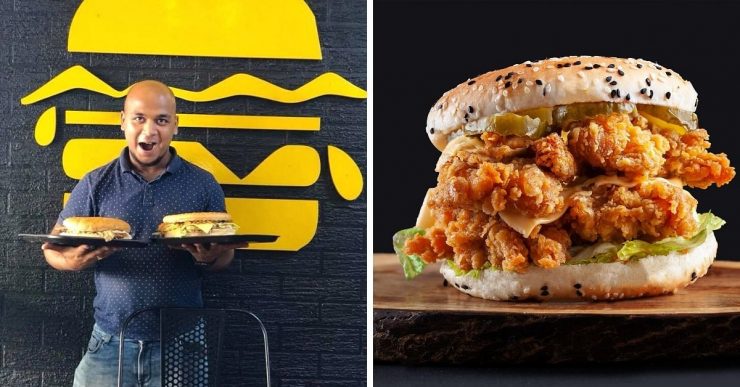 Coming from a small town in Maharashtra, I fondly remember making a mandatory trip to McDonald’s every time I visited Mumbai. There were not many burger brands then, and global Quick Service Restaurant (QSR) chains were among the first to give Indians an actual taste of the food item. But outlets of these multinational brands penetrated Tier II and III cities much later.

So when Biraja Rout says, “I had never seen a burger in 21 years of my life,” it does not come as a surprise to me.

A native of Bhubaneshwar, Biraja moved to Bengaluru in 2011 to work at Infosys. “I was aware of the famous vada pav from Mumbai, but I had never seen a burger all my life. I was aghast to know that despite its existence across the world as well as in some parts of India, it was unavailable in my hometown,” he tells The Better India.

Biraja learned about the burger when he visited Mcdonald’s. “I lived in the electronic city and could see pizza chains, but there were no KFC or other global burger brands then,” he says.

Intrigued by the product, he started researching and learned that there were hardly any Indian burger brands or QSR chains in Bengaluru. Over the months, his love of burgers only grew. “Initially, I spent weekends exploring the city and travelling around the outskirts. But eventually, I became exhausted, and decided to use my weekends to convert my love for burgers into a business,” the 33-year-old says.

Today, his burger chain Biggies Burger has 46 outlets across 14 cities, earning him crores.

Biraja belongs to a middle-class family, where his father was a government employee. “I had academic qualifications of an IT professional and had no experience in business whatsoever,” he recalls.

He then learned about burgers on YouTube to understand the different ingredients that went into preparing different varieties. “I dove into the entire process of making buns, patties, veggies and sauces. I watched videos and referred to international publications, especially in the USA and Germany. I also read blogs that focussed on diversification of burgers,” he says.

He learned about fried, grilled, and other types of burgers. “Offering a variety of burgers was a usual practice abroad. But in India, there were mainly fried patty burgers. I realised that the market had the potential to grow and mature over the years,” he notes.

The IT professional rented a 5×5 feet space near his office and spent weekends selling burgers. “I hired a home chef to prepare the burgers, and bought a kiosk from a fabricator to start Biggies Burger,” Biraja says.

Biraja decided that his food would come with a unique twist. “Around 2011-12, there was a huge wave of negative marketing against burgers, and the news stated that it was junk food that adversely affected people’s health. So I decided to offer baked patty burgers,” he explains.

He introduced baked burgers, which he says have 30 per cent less calories than others in the market.

“I offered only one product, and the prospect worked in my favour as it also saved space. I had no room for grilling or frying the patty, and had to adapt to a small space. Baking made the turnaround time quick and viable. I also added fries and a beverage for side items,” he says.

His weekend business took a sweet turn in 2014 when one of his customers asked if it was a franchisee and inquired about buying one. “I shared my story, and they instantly agreed to open a branch at Garden College,” he says.

By 2016, Biraja had four franchises — two in Bengaluru, and one in Raipur and Bhubaneswar each. “Two customers and a friend decided to expand the business and invested about Rs 20 lakh. We all quit our respective jobs to focus entirely on growing the business,” he says. “One person decided to concentrate on business expansions, the other managed the operations, and I took the baton for product development.”

“We increased the range of products, which remain healthy, as our products are grilled or baked, but not fried. Our burgers have lean meat, and we use wheat buns,” Biraja says. Each outlet now also has about 400 sq feet of space that allows customers to sit and enjoy a comfortable experience.

Biraja says that today, the company offers 12 types of burgers, makes a revenue of Rs 8.9 crore, and has a brand value of Rs 23 crore. The burgers cost between Rs 150 and Rs 200.

Customer at the core

Ashish Diwanji, a frequenter from Koramangla, says, “I keep visiting a nearby outlet and have tried most of the burgers offered by Biggies Burger. Peri-Peri chicken is my favourite, followed by the Afghani Tandoori burger. I find that their burgers have better quality and more flavour than other chains in the city.”

Biraja says the products differ according to locations. Citing an example, he says, “In Gujarat, we offer pure vegetarian burgers,” he says.

He adds that such diversification also possesses unique challenges. “The uniformity and experience need to be managed along with standardisation of the product. The staff and other management have to be groomed accordingly. We are still working on streamlining the franchisees that send the right message across the customers,” Biraja says. He adds that a central excellence centre for training the staff deployed across India is underway.

He now plans to introduce plant-based and high protein content burgers. “We wish to fulfil varied customer demands and cater to their needs. Understanding the customer is our core strength,” he shares.

Biraja says that his aim is to make customers in Tier II and III cities experience premium quality burgers. “I do not want people to be unaware of burgers like I was,” he says.