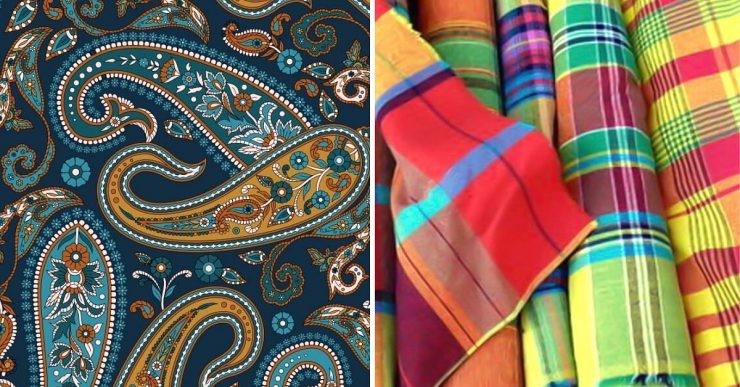 As you hold any fabric that has been crafted by artisans across India, gaze at the motifs printed on it. There is a story behind each one of them. While one legend says that a bamboo pen ‘kalam’ was used to come up with the chintz motif pattern, another tells of how the paisley print came into being as people observed the swaying branches of the kairi tree.

The narrative thread that you are about to read is woven of such legacies that exist behind some popular motifs.

If you have ever had a chance to stroll through the markets of France’s Provence, you would have seen a fabric print that dominates the rest. Inspired by nature, these prints go by the name les indiennes, which in English translates to ‘the Indians’.

Legend has it that the Armenians started importing the fabric from India to Marseille and soon the then King Louis XIV took a fancy to these. He wanted them imported into his kingdom.

The Armenians realised that their idea was becoming popular and began replicating the designs and selling them at a cheaper rate.

The colourful prints with their sunflowers and pastel shades were soon a hit in the region of Provence.

If you’ve carefully observed the depictions on fabrics that have chintz motifs, there is a standout. Apart from the usual art forms, tree motifs and more, there are also folk tales depicted.

The British were highly pleased with these motifs and loved them. Thus the name was changed from the initial kalamari to chintz — as cheent is the Indian word for ‘spotted’.

The story of the motif’s origins goes so back in time that one can even see it in the fifth-century wall frescoes in Ajanta Ellora caves. With its name having roots in the Malay Indonesian word which means ‘to tie’, what sets it apart from other fabrics is the way it is produced.
Instead of weaving the design onto cloth, threads are wrapped in vertical arrangements and a process called resist dyeing produces the design.

The name originates from the Persian phrase shir-o-shakhar, meaning “milk and sugar”. During production, two thread colours at different tensions are put onto the loom.

What this does is it creates alternating colours as well as alternating textures of fabric, smooth and puckered.

The fragility of this motif has stood the test of time right from its origins in the 12th century. The fabric is dyed by hand while it is in yarn form. The yarn is then put into a holder which has dye, salt, soda, water and stabilisers. The resultant fabric is bumpy as it isn’t combed before it can be woven. This is due to its fragile nature.

A tree symbolising eternity, a seed representing fertility and symbols that are close to the Chinese yin yang encapsulates the beauty of this motif.

Legend says that the pine cone designs are of Persian origin while the name comes from the town of Paisley in West Scotland where the prints are produced.

The Story of Indian Calico That Changed the World by Mira Gupta, Published on 21 August 2022.

The distinctly New Orleans story of seersucker, and why it’s not quite true by Lydia Blackmore, Published on 23 May 2019.

Print Play: The History of Madras Plaid by Logan Sykes, Published on 2 July 2015.