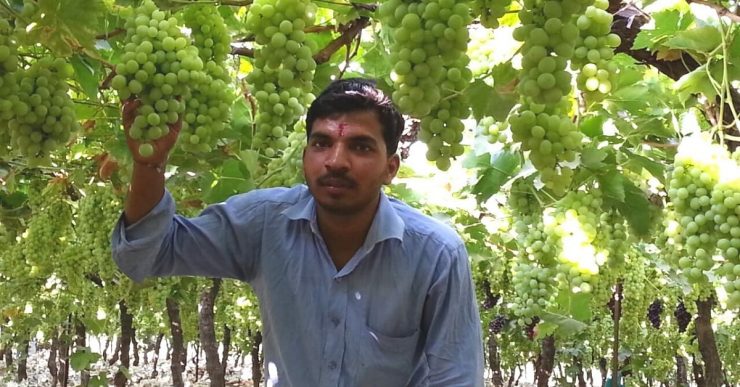 My discussions over a phone call with Rahul Rasal from Nighoj village in Maharashtra about his farming successes made me realise how close a relationship a farmer shares with the soil. He knows the exact chemical composition of his farm soil and its output capacity. He is well aware of the interventions needed to improve and maintain its fertility.

But he has gained this knowledge through rough experiences and an immense passion for farming.

The 30-year-old says that a few years ago, his 65-acre land was nowhere close to growing crops. But his learnings from graduating in the Science field helped him succeed.

A blend of organic and scientific methods

“In 2006, when I started farming, my land had saline soil with Total Dissolved Solids (TDS) [inorganic salts and small amounts of organic matter] present between 2,000 and 3,000. The calcium percentage was 21, and the pH value was 8.6. Also, the organic carbon content was low at 0.4. The soil quality was poor to the extent that its water-retaining capacity was 35 per cent. The high alkaline levels and extreme salinity made it difficult and made farming unfeasible,” he tells The Better India.

Rahul says the soil composition was naturally saline in the region, and years of using chemical fertilisers worsened it. Moreover, the groundwater he used for irrigation was also of poor quality with high amounts of minerals and salts.

But today, Rahul has transformed the situation entirely and grows residue-free crops for exports, earning him lakhs of rupees.

He has succeeded by setting up a Reverse Osmosis (RO) plant on his farm to treat the water and implemented a blend of scientific and organic techniques to improve the yield.

“I learned that for best results, any pesticide or insecticide should be mixed with distilled water before use. And considering the soil health, I needed to reduce the use of heavy chemicals in my soil,” Rahul says.

Rahul explains that RO water does not have salinity and thereby prevents its possibility. “I require about 6,000 litres of water a day, and setting up the water treatment plant costs me Rs 20 paise per litre,” he says.

Rahul also sprayed fermented buttermilk to prevent pest infestation and improve microbial activity. Further, the farmer set up a biogas system to generate aerobic slurry. “I pumped the slurry from biogas in an aerated tank. The process helped oxygenate the slurry with 5 per cent more oxygen, which was fed to the fields every week. The interventions helped increase the organic carbon to 1.8,” he says.

The TDS levels dropped to 20, and pH levels reduced between 6.5 and 6.8, making the conditions ideal for farming.

Rahul later devised a new method to irrigate his farms. “I chose a smaller nozzle for drip irrigation and spraying pesticides that ensured well spreading of the liquid molecules on crops. I irrigated the farm at 8 pm to reduce evaporation losses, ensure the soil retained moisture for long hours and maintain the farm humidity at 35 per cent,” he says.

At present, Rahul grows grapes of the crimson seedless variety on 15 acres, while he cultivates pomegranates and onions on another 15 acres each. “I have also planted cucumber, brinjal and papaya on the remaining 13 acres,” he says.

The total harvest earns him a profit of Rs 4 lakh per acre. “I export all the products as they are residue-free and meet the quality standards of European countries and the United Kingdom,” he adds.

But Rahul has not entirely given up on pesticides and insecticides. “I have a private weather station installed on the farm. If it predicts unseasonal rain or extreme weather such as hailstorms, I spray chemicals on the crops as a preventive measure. But the application is done only once instead of the conventional three sprays for a crop. So, my farm produce has no chemical residue by the time it reaches harvest,” he notes.

He says that using a blend of scientific and organic techniques has helped him reduce his production cost by 40 per cent. “In India, the percentage of farmers pursuing progressive farming is low, and I want more of my community members to invest and adopt such techniques,” he says.