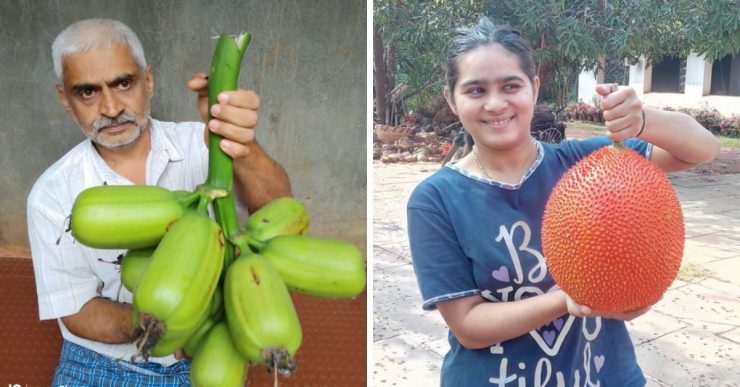 Gac from Vietnam, Jaboticaba and Biriba from Brazil, Cempedak from Malaysia, Blue Java banana from Indonesia – these are just a few exotic fruits on Rajendra Hindumane’s lush green farm. But if you begin counting you are likely to end up with an outstanding 1,300 types of fruit plants, spices, medicinal herbs and some rare wild plants growing there. Ringed by the tall areca nut palms standing on the edges in Sagar, the farm is located in Karnataka’s Dakshina Kannada region.

An areca nut and mango farmer, 55-year-old Rajendra developed an interest in collecting rare and exotic fruits some 20 years back following a chance meeting with Electronics Engineering professor Satyanarain Bhat. With encouragement from fellow farmer Anil Balanja and plant collector Majjigesara Subramanya, he has gathered an envious collection of fruits and medicinal plants, most of which are largely unheard of and not seen in this part of the world.

“The sale of areca nut, mango pickles, spices like cloves and cardamom, jackfruit chips, etc. fuels my passion for growing exotic fruits sourced from countries like Vietnam, Australia, Malaysia, Brazil, Thailand,  Japan, Hawaii by middlemen and also from nurseries in Kerala and West Bengal,” says Rajendra, a Commerce graduate. “It is a very costly passion. For instance, I paid Rs 6,000 for a blueberry plant from Brazil.”

The newly arrived seedlings or seeds are grown in a polyhouse and observed for several months or a couple of seasons before being planted in the open field. “Many times despite my best efforts the plants have died but I persisted and learnt the agronomic practices to be followed,” he says.

Rajendra’s passion for collecting exotic fruits has worn off on his twin daughters, Megha and Gagana, both software engineers.

They maintain a database of the plants growing on the farm with details like botanical names, local names, habitats, flowering and fruiting season, their medicinal properties, peculiarities, etc.

Pointing to a climber, which is locally known as Halage Hannu, Megha (25), says, “Its botanical name is Elaeagnus Conferta. Its fruit becomes orange when ripe and is edible and somewhat acidic in taste. It has anti-diabetic properties and is used for the treatment of pulmonary complaints. It is rich in antioxidants.”

Rajendra is proud of his most extensive collection of Appemidi, a mango pickle variety endemic to the Malnad region. He has 60 varieties of Appemidi and the family makes around 150kg of pickles. “Unlike the others, here the entire fruit is pickled which has a shelf life of six years,” he informs.

According to Rajendra, the months between June to August, when it pours in Sagar, lead to problems like nematodes and fungus affecting the plants. And when the fruit matures one has to battle the fruit flies beside the stem borer insects.

At his farm, you’re likely to come across Banana Sugarcane, a tall perennial plant which produces multiple stems and trunks whose yield is almost triple compared to other available varieties. Other plants include Popoulu banana, native to the  Polynesian islands in the Pacific region; Uduru Bakke Jack, a self-harvesting jackfruit whose fruits automatically fall off from the branches once ripe; and Anangi (Oroxylum Indicum) whose large leaf stalks wither and fall off the tree and collect near the base of the trunk, appearing to look like a pile of broken limb bones. Its leaves, seeds and fruits are used as food and in traditional dishes.

However, it’s the commercial crops like coffee, cocoa, cinnamon, vanilla, pepper, ginger, clove, turmeric and nutmeg etc, which bring in the moolah. Recognised by the State for its vast collection, the farm is home to rare and medicinal herbs of the Western Ghats.

Managing a farm in the midst of  Sahyadris can be challenging as most farmers here have to contend with the wild animals like Monkeys, Malabar squirrel, Gaur, Hornbill, Porcupine, Wild pigs, etc. “We lose close to 25 per cent of our crops to the wild animals but have learnt to live with them,” informs Rajendra, crediting his success as a farmer to the 15 bee boxes dotting his farm–colonised by the stingless bees.

Like other plant collector enthusiasts, he is of the opinion that quarantine procedures be made more liberal and waived off on those plant varieties which have already been introduced in the country or naturalised. He curiously asks, “Did you know that if you wanted to bring Catimon Mango scions or plants from Thailand one has to go through Customs and undergo quarantine?”

For those interested in growing new varieties of fruits he suggests Mangosteen and Rambutan, which can be grown from seedlings and grafted plants.

With so many fruits on the dining table, there is never a dull day in the Hindumane household. As Gagana puts it, “Ours is a fruit lover’s paradise.”

Edited by Yoshita Rao; All photo credits to Rajendra Hindumane