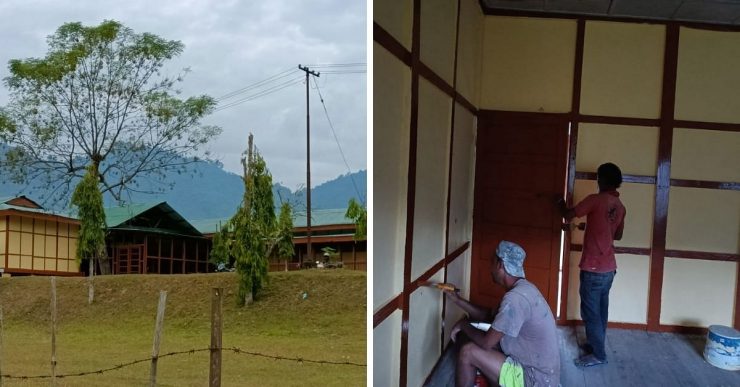 Tumto Ete, a native of Arunachal Pradesh’s West Siang district, was one of the first in his family to attend school. Back in 1961, the Pobdi Secondary School was the only school opened in the region where there were no facilities such as roads and electricity.

The school only had a thatched roof when it was started. With just a handful of children, the school had no amenities such as boards, desks or benches due to insufficient funds.

Nevertheless, to educate their kids, the parents had come forward to contribute their hard-earned savings to improve the infrastructure and it was upgraded to the primary level only in 1967. It took the school another four decades to add a secondary section.

An excited Tumto joined the school with the neighbourhood kids, graduated in 1987 and became a teacher in another school.

Grateful for the education and thereafter a successful career, he decided to give back to his alma mater by refurbishing the school’s infrastructure.

“We have a history of community-driven projects where villagers have come together time and again to maintain the school which now has students from six villages including Bene, Wak, Kugi Pomse, Kugi Pomte, Paya and Gune Baane. This school has produced doctors, lawyers, engineers, teachers and more. While we do have private schools, this one is affordable for all. Education is a vital need and it is a relief to know that people feel the same. The growth of all our children is proof,” Tumto tells The Better India.

Seeing the dilapidated building, Tumto gathered alumni and collaborated with the Paktu Ete Bango Welfare Society to raise funds. He is not only the chairman of the society but also was one of the 10 people who had donated more land to the school to develop girls’ and boys’ hostels in the past.

His involvement is popular across the region so when they called for a fundraising event, several people happily came forward to help maintain the school.

“Close to 320 villagers donated 2-3 days of their salary. Towards the end of the campaign, the school had raised around Rs 15 lakh,” he adds. The money was used to repair walls, floors and the roof of the school spread across 10,500 square metres. The school got new benches, chairs, desks and was painted in early February 2022.

“The school structure is a semi-RCC (Reinforced Cement Concrete) built so we had to install new structures and bricks to increase the school’s shelf-life for another 30 years,” he says.