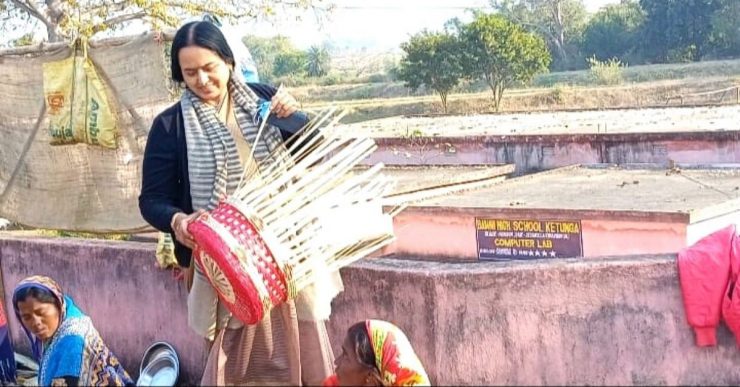 “For 50 odd years, no government officer or minister visited us, and if not for Suchitra madam, our tribe would have probably been extinct,” says Ajay Sabar, a tribal from Burudih village.

The 50-year-old belongs to the Sabar tribe, one of the most primitive and endangered tribes listed among the 32 that exist in Jharkhand. “We were struggling to survive and had no land to farm, nor houses to live in but bamboo huts in the forests. We made a meagre earning of Rs 1,500 to Rs 2,000 a month,” he says.

This is not the story of Ajay alone but 300 plus families from 25 villages who live about 60 km from Jamshedpur, the capital city of Jharkhand.

The tribe was listed among the 68 de-notified languished communities by the British for their insubordination towards them. The tribe was declared as ‘criminal’ under the Criminal Tribes Act, 1871. Years of neglect made their end seem near as the tribals were at the mercy of dwindling forest resources and donations.

Today, they are not only surviving but thriving. All thanks to compassion and years of hard work by Suchitra Sinha, a former IAS officer.

In 1988, Suchitra cleared the Bihar Public Service Commission examination and, since she belonged to the region, she was aware of the underdeveloped area and the plight the locals suffered daily. The region was also known for Naxal rebels.

The gritty young girl, who studied to become an IAS officer, joined as a deputy collector at Jamshedpur in 1996, which was a turning point in her life.

“A few members of Bharat Seva Sangha paid a visit to my office seeking donations for Sabar Tribes, a Particularly Vulnerable Tribal Group (PVTG). They informed me that the tribals were in a dire state and would die of hunger if adequate donations were not received,” she says.

Suchitra was intrigued by the news and decided to visit the Nimdih block located in Saraikela district, now a part of Jharkhand.

“I saw the tribals living in abject poverty and were dependent on forest resources. The children did not have clothes to wear, and families struggled to make ends meet. “The situation was no different to other 216 families in the area,” she recalls.

Suchitra decided to find a way to improve the lives of the residents. “I learned that the tribals weaved baskets and brooms from palm, date, bamboo plants and kanji grass. The artisans sold them at Rs 30 each. The tribals earned barely Rs 2,000/month,” she says.

Moved by their economic condition, Suchitra decided to work towards their betterment. She released funds under the tribal schemes to encourage and generate livelihoods in poultry, food and other areas.

But she felt the need to put in more effort for them. She approached the then Deputy Development Commissioner (DDC), explaining the condition of tribals and sought support. However, the official refused their request and doubted if the tribal community could be lifted out of poverty by her efforts alone.

Though disheartened, Suchitra refused to give up on the community and visited Samarpur village in the block, encouraging men and women to continue weaving baskets.

In 1993, she was transferred to Delhi. On one occasion from her return trip to the village, Suchitra brought a traditional basket made by a tribal. “I gifted it to the then Handicraft Development Commissioner and explained about the Sabar tribe and their conditions. He was impressed by the artistic and creative product and assigned five projects to mould their skills,” she adds.

Suchitra roped in five designers from the National Institute of Fashion Design (NIFT), Delhi, and asked them to visit hamlets to train the tribals.

Apart from Samanpur, the residents from Bereda, Bindubeda, Chirubeda, Bhangad, Biridudih, Makula, and others received the training. “I formed a self-help group of the villagers, and they took the training in groups of 10. The trainers did not know local languages, and it was vice-versa with the tribals. But a month-long training helped them bond. It also helped them improve the quality of the products and added varieties to the handicraft items,” she says, adding the trained tribals later shared their learnings with others in the villages.

The artisans now could make about 104 items, including planters, bags, paper holders files, lampshades and more. In 2002, Suchitra then formed the NGO Ambalika to promote the artisans. Suchitra took the artisans, groomed them and asked them to stay at her place in Delhi. “I invited them to Delhi to participate in the handicraft exhibitions and provided them a platform to sell their products,” she says.

Suchitra says they received significant recognition in exhibitions, but the tribals faced difficulty bagging government and corporate orders. “Nevertheless, we did not miss any opportunity that came our way, and slowly the tribals got more business as their network grew stronger. However, the Naxal activity increased by 2005, and my initiative took a backseat. Slowly, the connection with the tribals dwindled, and we stopped working entirely,” she says.

The situation stabilised around 2010, and Suchitra made another visit to the villages. “I learned about the India International Trade Fair scheduled for 2011 and immediately connected with a few tribals, requesting them to participate,” she says.

How To Save A Tribe

Suchitra says the quality of products made by the tribe had degraded as they lost their touch and did not get opportunities to improve their skills. “For this, the tribals received a short training on how to make commercially viable products. They then presented their work at national and international events. They even prepared the file folder for the BRICS conference held in 2012,” she notes.

Ajay says, “We took training for months and offered the products at Pragati Maidan Delhi Haat and other premium locations in Delhi. Now officers and celebrities visit us.”

He adds that apart from the training, Suchitra provided food and clothing for the community, including the children. “At times, she spent from her pocket providing us with the needful. It is because of her interventions through government schemes that we have pukka houses, electricity and bank accounts,” he says.

“The tribal community’s income has significantly increased since. Each tribal earns Rs 7,000 to 8,000 a month. The cheapest product costs Rs 600, and the most expensive is Rs 3,000. The products are also available on online platforms such as Amazon and the Ambalika website under the brand Kraftribe,” Ajay adds.

Ajay says Suchitra is revered as no less than a mother for the people and is fondly called ‘Ma’.

However, Suchitra who retired in 2019, begs to differ. She says, “I do not wish to be addressed as a ‘goddess’ or a ‘saviour’. Neither do I want any fame. I wanted to give tribals a life of dignity who were facing extinction by earning them a deserved price for their skills.”