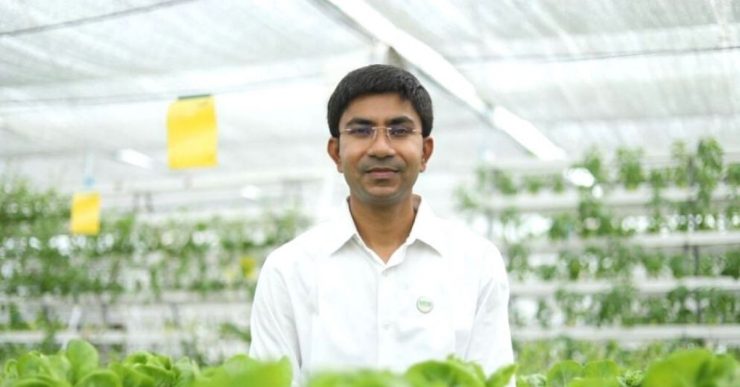 “I am a farmer by birth, and agriculture is part of my life. Even during my academic years, I spent time in the fields helping my father grow traditional vegetables,” says Pravin Patel from Vadodara, Gujarat.

Pravin pursued his graduation in commerce, spending weekends on the farm. “From irrigating the farms to riding bullocks for ploughing, I have done it all,” he tells The Better India.

So when he received employment with a private telecom company, the work did not give him much satisfaction, he says. He has since quit his job, and what he is doing instead has proved successful for not just him, but also thousands of farmers in Gujarat.

“I worked between 2007 and 2011 as a senior accountant with the firm, but the thought of agriculture remained at the back of my mind,” he recalls.

Pravin says that he kept thinking of ideas on how he could bring improvement in the agriculture field. “The traditional farmer is under constant pressure to produce more output from minimum resources. The weather and increasing production costs make agriculture a risky occupation,” he explains.

With the hopes of success diminishing, he came across the concept of hydroponics farming through the internet. “I explored the concept and learned that the technique of soilless farming was lucrative and offered high returns. Moreover, it reduced risks posed by erratic weather and reduced the labour work to grow vegetables,” he says.

Pravin adds, “The concept is innovative as it has many cost and health benefits. Farmers do not need to use toxic chemical fertilisers and insecticides to grow food, which reduces production costs while benefiting the environment as well as the end consumer. I found that it could be a game-changer in the agriculture field. It was a more controlled farming method.”

He says, “Farming is a laborious job and not as attractive as other white-collar professions. But such innovative practices offer opportunities to farmers to evolve as an agripreneur and help multiply returns.”

Pravin experimented with the farming technique on his 0.25-acre land. “Every positive feature of this method that experts had talked about online turned out to be true. So I decided to scale up,” he adds.

In 2014, he formed a farmer producer company Brio Hydroponics to grow food using hydroponics, and decided to help farmers do the same.

“Hydroponic farming is financially demanding, and very few farmers have the capacity to invest huge sums for the setup, find a market for their farm produce, and allow the turnaround time to churn profits,” he says.

Pravin says his focus has been to introduce workable and economically viable innovative solutions. “Such methods can only disrupt the agriculture sector and bring the required positive impact on farmer livelihood in India,” he says.

He adds, “We derived high-tech patented technologies such as rain protection, wire rope type and a triple layer net house, conceived by collaborating with Pic-Plant Ltd, Israel. It enables high yield with superior quality produce across all seasons.”

Pravin eventually started reaching out to farmers and conducting workshops and training programmes on hydroponics. He also roped in his brother-in-law for the venture.

“The training is conducted at multiple levels, which range from one day to week-long workshops. The cost differs accordingly,” he says.

“By 2017, I convinced significant farmers to take up hydroponics farming commercially. I helped them arrange funds and loans from the financial institutions,” he says.

Pravin says that so far, he has trained and helped 16,000 farmers take up hydroponics farming, bearing them positive results.

Bhavik Patel, one of the farmers from Gujarat, says, “I had come across the concept of aquaponics during my trip to the USA a few years ago. But it did not have a widespread presence in my region. So I continued practising traditional agriculture, growing wheat, corn and gram.”

So when Bhavik learned about Pravin’s hydroponic startup, he rushed to adopt the technique. “I underwent a week-long training to understand and learn the concepts of hydroponics. I started from a small plot by investing Rs 50 lakh growing lettuce, romaine, basil and other types of exotic vegetables which have helped me recover the investments and increase profits up to 35 per cent,” he adds.

Bhavik says, like any other venture, he faced hurdles in completing the administrative process, seeking government permissions, and streamlining the infrastructure and other formalities. “However, the business is working smoothly, as all of my products are highly demanded by five-star hotels, traders, and commercial markets,” he adds.

Collectively, the FPO rakes an annual revenue of Rs 10 crore, he notes. The company has also set up mass scale projects for giants such as Adani, Dainik Bhaskar, and others.

The company plans to introduce blueberry farming through hydroponics for the first time in India, making this exotic fruit more accessible in the Indian market at 50 per cent less cost. “The project has already started, and the blueberries will be available by the end of this harvest season,” he says.