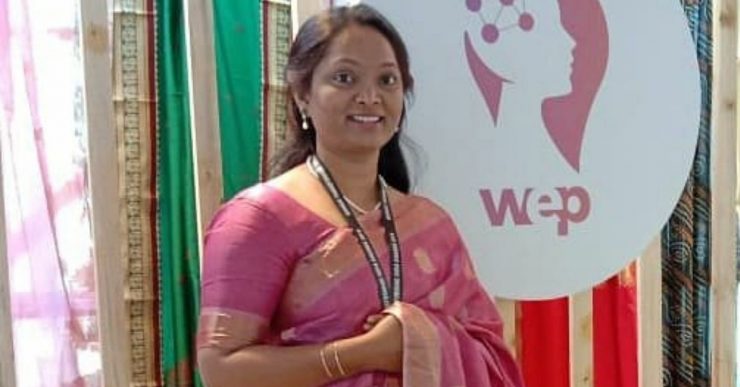 For long, the image of mahua (Madhuca longifolia), or the Indian Butter tree, has been synonymous with liquor, predominantly consumed by Adivasis.

In recent years, there have been attempts to shift this perception to focus on the flower’s nutritious value instead. In may last year, the Maharashtra government lifted restrictions on the sale, transportation, and collection of mahua, while the Agriculture and Processed Foods Export Development Authority, exported dehydrated mahua flowers from the Korba district of Chhattisgarh to Paris.

Hopping on this bandwagon, Chhattisgarh-based Razia Shaikh is involving the flower as an ingredient in a variety of value-added products including ladoos, cookies, nutri bars, and more, while uplifting rural women in Bastar district. A microbiologist by profession, Shaikh set up Bastar Foods in 2018 after working as a researcher for the state government’s ‘Safe Motherhood’ initiative.

Changing how we view mahua

“My job was to travel across remote parts of the state and study different plants,” she tells The Better India. “Once during a field study I met some women from Self-Help Groups (SHGs) in Kamanar village. They were making mahua ladoos, which intrigued me, and I learnt about the many benefits of mahua.”

The flower, mainly found in central and northern Indian forests, is rich in protein as well as vitamins and minerals. It has numerous phytochemical attributes and thus can be used as a medicine for many diseases including headache and diarrhoea, as well as skin and eye diseases. Other than liquor, its high sugar content makes it a natural sweetener in dishes such as halwa and kheer.

Razia also understood that the women did not have proper market linkages. “I wanted to help them popularise their products across India. I worked with them for nearly six months to set up the model,” the Jagdalpur native says.

And so, with a nutritionist, a few technicians, and six women, she began her food venture. After a while, the Bastar district administration and forest department extended their support by providing machinery and marketing opportunities, she notes.

But many other factors would come into play here. The tarnished image of the flower meant that people were hesitant to purchase Bastar Foods’ products. This was despite the fact that mahua holds cultural significance in food and medicine for indigenous and tribal populations of north India, alongside the fact that the company had obtained FSSAI and ISO certifications.

“This was expected, given that at first, even I had my apprehensions. Making the ladoos more delicious was challenging, as we wanted to avoid adding a lot of sugar to make them healthy. After conducting a lot of research, our team found a way to make them tasty and healthy in a natural way. Many said the business will fail,” she says.

To attract customers, Razia kept the price at just Rs 5, and as buyers increased, she formed ten self-help groups. Together, she and the women conducted new experiments on different types of mahua recipes and regularly organised workshops and trained everyone. She also set up stalls in exhibitions and food fairs to market mahua ladoos.

“One day, an NRI came to our stall and bought ladoos worth Rs 450, saying that the smell of the ladoo reminded him of India. That was our first big order. Besides selling the ladoos, we also distributed free ones to a group of 30 people including women, men and children suffering from malnourishment. When the state government did an analysis they found their haemoglobin levels had improved. Now we get orders from patients who have anaemia as well,” she says.

After ladoos, the company also introduced other range of products like mahua cookies, energy bites, tea, and so on.

Razia also has an in-house laboratory for quality check. If the lab results are satisfactory, she sends the samples to the National Accreditation Board for Testing and Calibration Laboratories (NABL) accredited labs in Hyderabad and Nagpur.

As of now, Bastar Foods has eight manufacturing units across Chhattisgarh, benefiting a total of 350 women, who earlier had no jobs or jobs which barely paid anything. According to Razia, every woman earns a monthly average of Rs 4,000.

“We provide training in everything, from safely removing mahua flowers to dehydrating them, packaging, and so on. The women mostly use their spare time to earn extra for their family’s future,” says Razia.

Malti, 28, joined Bastar Foods in 2020 at a managerial position. She says that she, too, was surprised to see the versatility of mahua and the revenue it can bring. “Employment opportunities are few where I live. After finishing my studies, I was unemployed, because travelling far to look for a job was not an option for me. So when Razia ma’am set up her unit here, I applied to gain financial independence. I could not believe the increasing number of orders that mahua products get. I earn Rs 5,000 every month, which I am saving for my future. I am also getting exposure on how to manage people,” she says.

At present, Bastar Foods products are sold pan India via e-commerce platforms like Amazon. Razia hopes to expand her presence on Flipkart and other such websites with new products like daliya and organic rice.