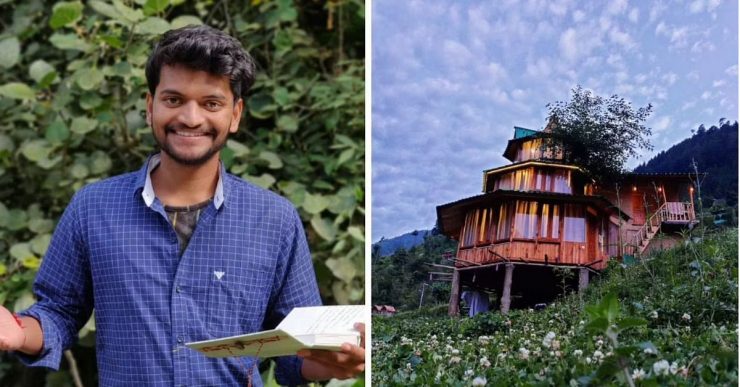 Rahul Koppula, a 27-year-old engineering graduate, grew up in a small village called Nirmal in Telangana. In the midst of his course, Rahul realised that engineering is not the field for him. He started thinking of putting together a business of his own in the future and contemplated many startup ideas. But never in his dreams did he think of getting into the tourism field with a unique hotel business plan.

The travel enthusiast is now the owner of The Hidden Burrow treehouse hotel chain located in four different areas of Jibhi, a small village in Himachal Pradesh.

“One may find this awkward but I have never stayed in a treehouse before building one as part of my business,” says the entrepreneur to The Better India. “But I have forever adored them while watching movies or YouTube videos. Maybe that fascination drew me here and I am so happy about what I turned it into.”

Jibhi is an unsung gem in the tourist hub of Himachal Pradesh. When Rahul visited this village for the first time in 2018, there were zero tourists. “I spotted many trees, all of them at least 100 years old. That’s when I connected my love for treehouses to this place which resulted in the formation of The Hidden Burrow. Also, this way I have answered the question our ancestors often ask, ‘Do you think money grows on trees?’ As you can see, my reply is ‘yes’,” quips Rahul.

The tale of Jibhi’s treehouses

Rahul attended several business seminars during his engineerRahul Koppula from Telangana started The Hidden Burrow, a treehouse hotel chain located in Jibhi, Himachal Pradesh. Here’s how he did it.ing studies in electronics and communication. In 2016, he stepped into the entrepreneurship field through a clothing business. “Due to lack of professionalism and other reasons, the business didn’t work out well. Post that, I travelled a lot and as mentioned earlier, that’s how the treehouse idea came about,” he says.

The next few days were dedicated to the research of treehouse construction, its advantages and limitations. “I saw videos and read articles about several treehouses around the world. In July 2018, four months after the trip, I began the work of the first treehouse by collaborating with some local artisans of the place,” explains Rahul.

The construction began by taking land for lease from the villagers. To make sure that the house is built in a sustainable manner, he reused wood and those collected from local forests which were replenished within months.

After settling the construction, the next big part was marketing. But Rahul says it was simpler than he imagined. “I started telling people about my treehouse through social media. You might not believe me but even before it was made, people came in and booked the place through our website. That’s when I felt the affirmation that this business will work out well.”

“I chipped in Rs 10 lakh as initial investment for the project. After the first year’s profit, we built another treehouse and it continues as a cycle. Now we have a total of four treehouses in Jibhi,” says the owner of Jannat, Adbhut, Raabta and Kudrat treehouse hotels in Himachal Pradesh.

Other than being just a luxury hotel in a tourist place, The Hidden Burrow has provided employment to many people from the village. From the construction period till its successful four years, the company’s pillars of strength are the villagers. The hotel has also created a new tourist location apart from Shimla and Kullu in the state of Himachal Pradesh.

Rahul says, “Earlier, there were not even 10 hotels in the village. But within a period of three years, more than 300 small and big ones have come up here. I have also helped some locals build similar treehouses.”

Today, the successful entrepreneur has a turnover of more than Rs 1 crore annually from this hotel business and is heading toward more exciting projects.

Read this story in Hindi here.