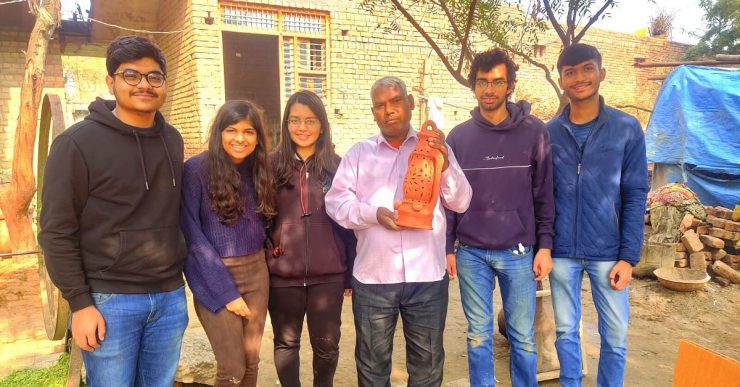 Assisting Giriraj in the challenging endeavour of keeping this art form alive are students from the Shri Ram College of Commerce (SRCC), Delhi University, who run a social entrepreneurship project called Rivaayat.

This project operates under the aegis of Connecting Dreams Foundation, a Delhi-based NGO that provides the youth “with an opportunity to empower people through entrepreneurial action to improve their livelihoods in an economically, socially and environmentally sustainable way.”

For students running Rivaayat, the goal is simple — to create demand prospects for artisans so they can sell their products, and eventually, help revive the art of terracotta pottery.

“Our products are listed on more than 30 online platforms, which help us generate revenue for artisans. Also, we sell through our own website. We have various other demand avenues as well such as exhibitions, offline stores, exports etc., cumulatively helping us revive this dying art form. The objective is to make terracotta sustainable, i.e., empowering artisans to sell themselves with minimal or no interference from us. We have started moving towards upskilling the artisans and providing them with necessary know-how of logistics and operations so they become self-dependent,” says Raya Dhawan, project director at Rivaayat, CDF-SRCC, and an Economics Honours student (‘23 batch), in conversation with The Better India.

The students say they chose terracotta because while a market for such products already exists, there was a lack of direct linkage between artisans and customers. Moreover, terracotta products have nutritional value — food cooked in such utensils is high in calcium, magnesium, and sulphur. It also minimises the amount of oil used in cooking.

Going further, these terracotta products are completely biodegradable. This fulfils the team’s goal of maintaining a sustainable environment as well.

“Terracotta pottery is not the only art form we are focussing on. We are researching and hoping to venture into more art forms that are also on the verge of dying. Currently, we are also focussing on baskets woven using water hyacinth. The little known craft uses water reeds that aggravate water pollution to make utility baskets,” adds Raya.

“Water hyacinth is the worst aquatic weed and its use in basketry not only helps in saving the environment but provides employment to the makers. Rivaayat employs over 30 women in the area and further aims to revive the artform,” says Niladri Mondal, project director.

Currently, Rivaayat is associated with more than 25 artisans across Rajasthan, Haryana and Delhi. To be more specific, their artisans are organised in four clusters, which include Palwal in Haryana, Moliya Gaon and Andhwari in Rajasthan, and Uttam Nagar in Delhi.

“Since associating with us, they have seen their incomes rise by up to 186 per cent. Even during the pandemic, we were able to generate demand for our artisans through various online listings and e-commerce platforms. We were able to support them at a time when they required it the most, and that in itself speaks of the impact we are creating,” claims Niladri.

‘Never thought young students would help us this way’

“We came across a group of artisans selling very fine pottery products at cheap rates. However, these products were valued highly in the international and domestic markets, which made us think about the reasons behind the same. Later, in an article, we read about Kumar Colony in Uttam Nagar and tried to understand the craft better. There are about 600 potter families in the area, so that is where we started. After conducting surveys and analysing the place, we realised that the artisans were not earning adequately. Potters who practised fine pottery were shifting to raw pottery, catering to festivals in a bid to earn more,” explains Niladri.

“We found out that direct market linkage was a major issue that these artisans were facing. Thus, we started Rivaayat to do something for them under the mentorship of Giriraj Prasad ji,” adds Raya.

How do these students earn the trust of these artisans? They go on ground surveys to these communities to identify and map their problems.

“After talking with the artisans, we explain our model to them in simple terms. When they see that the outcomes are really noticeable (from our past performances) they tend to put their trust in Rivaayat, and then the journey with a new artisan begins. Even through the pandemic, despite some initial scepticism of selling their wares online, they have kept their faith in our team,” notes Raya.

Gajraj Singh, a state awardee potter from Haryana’s Palwal district, says, “My family has been engaged in this line of work for nearly four generations. Our work with Rivaayat has proven to be very fruitful. The project helped us during the lockdown with online orders. Thus far we have received orders worth Rs 3 lakh through the Rivaayat platform. Never did I think that young students like these would help us with our livelihood. However, they came to us, saw our work, took the time to understand it, got some items made, and paid us on time. Trust was never an issue with these youngsters. Also, after collaborating with Rivaayat, we’ve learnt some new things about the trade, and have come up with new designs.”

“At Rivaayat, our aim is to uplift the artisans and not earn profits. Therefore, the entire revenue after recovering the cost goes to artisans directly,” claims Niladri.

The team says that some unique features of these products include:-

· The products have nutritional value in them and are beneficial for health.

· The products are 100 per cent biodegradable and recyclable.

· Rivaayat’s products are 100 per cent natural and there is no use of artificial colours and glazes.

· The black patches and shine in Rivaayat’s products come naturally in the process of firing.

Meanwhile, Raya says that under Prasad’s guidance, the founders of Rivaayat have learned a lot about the art form. “Additionally, students currently handling the project are in direct contact with our seniors, who initially started it. Thus, their experiences and insights help us through any difficulties we face,” says Raya.

Since Rivaayat operates under the SRCC chapter of CDF, wherein new members are added every year, even after one batch graduates, there is a younger batch to keep the initiative moving forward. Currently they have 70 members in their organisation working under different projects of CDF, of which 20 are dedicated to Project Rivaayat.

Rivaayat aims to create a stable demand chain for these artisans.

“Over time, we are planning to adopt more artisans under this venture. We are looking forward to expanding into other art forms. We also aim to create more social entrepreneurship opportunities, making market linkages for these artisans easier and growing on social media platforms,” claims Raya.

(You can visit Rivaayat Home on their website here.)