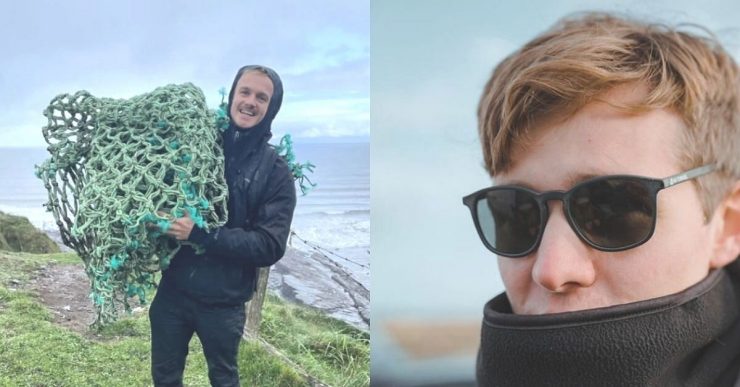 In 2019, an all-women team of scientists, under the banner of ‘Sea to Source’, set out on an expedition to trace and document how “plastic waste travels from source to sea”, and to “fill critical knowledge gaps around plastic flow, load, and composition along the Ganga”.

Their findings showed that the Gangetic wildlife species, such as the river dolphin and some species of freshwater turtles and otters, were most at risk of dying due to getting tangled in ‘ghost gear’, i.e. abandoned fishing equipment that is one of the most deadly forms of ocean plastic in the world.

Addressing this issue, annually, over 6,40,000 tonnes of fishing gear like nets, traps, pots, and lines are dumped into the ocean every year.

This was the reality that Harry Dennis, based in Cornwall, UK, was met with while working as a marine biologist. “We’ve come to realise the scale of the ghost gear problem, the threats it poses to wildlife, and the lack of attention that it gets. Fishing-related debris is particularly harmful in our oceans due to their tendency to entangle marine life and damage seabed habitats, such as kelp beds and coral reefs,” he told Drift, a magazine based out of the county.

With his team, the 26-year-old collects this ghost gear, recycles it, and makes trendy eyewear without the addition of chemicals and virgin plastics. These, he says, are scratch-resistant and made for the bright outdoors, ideal for surfing, sailing, water sports, and more.

What’s also interesting is that since there is no guarantee that two fishing nets would be of the same colour, each piece of eyewear, too, bears that unique distinction. “Each model is the same in terms of shape and durability, but as for the nets they are made from, each pair is unique to the beach it came from,” he said.

While the name Waterhaul would otherwise suggest a ‘fruitless effort’ — which is its standard definition — Harry’s venture is anything but. “The name originates from Newfoundland cod fisheries. It’s a term used to describe the act of hauling in a seine or trawl net that is absent of any catch. Retrieving empty nets from the ocean is precisely what we aim to achieve. We then redesign the material into functional, high-quality equipment for all adventure and coastal lifestyles,” he told The Marine Diaries.

Harry and his team of volunteers target places where ghost gear is found in abundance and sort through their findings based on the type of plastic each net contains. Gears that have more than one type of plastic are further categorised. The material is then shredded to fibre and washed to remove contaminants such as sand. Then, the fibres are melted, extruded, and cut into pellets. These pellets, in turn, are moulded to form the frame of the glasses. These are made from 100 per cent recycled polypropylene, he said.

The final product comes with polarised lenses to block horizontal light rays and eliminate glares from surfaces such as water, roads and snow. Meanwhile, every lens is treated with anti-reflective filters.

Harry said, “We wanted to design something functional and linked to nature and adventure. It also had to be something visual, that would start a conversation and lead to storytelling to raise awareness.”

So far, the company has collected 12 tonnes of ghost gear and made 15,000 sunglasses.

Last year, Waterhaul also began collecting discarded PPE to tackle the issue of excess plastic waste due to the pandemic. With these, they make recycled litter pickers, adventure knives, and so on.

Waterhaul’s products are available for orders in India. You can find out more here.