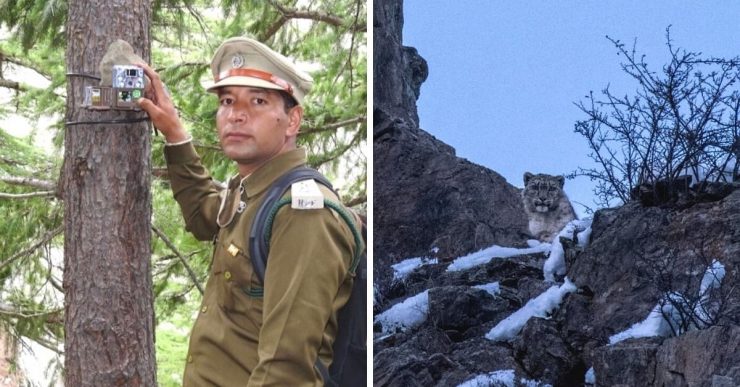 It was an evening in 2019 when Shiv Kumar, range officer at Lahaul forest and his three friends had packed up after another day of disappointment of not spotting the targetted wild animal.

“It was 5.30 pm and about to get dark in the Himalayan area when we decided to return. But one of my colleagues suggested taking one last glance at the ridge. As my eyes moved across the ridgeline, I saw a slight movement, and there it was dragging an ibex inside the cliff,” Shiv tells The Better India.

Shiv says he quickly scrambled to set up his tripod, camera and other equipment. After some adjustment, Shiv managed to take a picture of a snow leopard he had been chasing for years.

“It was an unforgettable moment. I was the first to document the live sighting of a wild animal in the Himachal Pradesh range. I had been lucky to have captured the exotic animal on a trap camera before but had never experienced the thrill of watching it live. And then I was honoured with the satisfying moment of my life,” Shiv says.

Sharing his experience, Shiv believes the snow leopard was aware of human presence. “I assumed it was a female and was waiting for us to leave as it dragged its hunt inside the cliff. The mother snow leopard probably wanted to feed its cub. But I managed to capture the moment it stared at us,” he adds.

Shiv says the picture quality of snow leopards was not excellent with less sunlight and the long distance between them and the animal. “I have taken far better pictures of snow leopards since then, but I still vote my first picture as the best,” he says.

The range officer says that his quest to find snow leopards sprung from his love for wildlife. “I joined the Udaipur forest division in 2004 as a deputy forest guard. I saw many wild animals and birds during my walks inside the forest. By 2010, I procured a camera and started documenting my sightings,” he adds.

During 2013-14, a few villagers living close to the forest area informed Shiv about spotting a snow leopard. “Residents often mentioned seeing the animal and finding its pugmarks. A wildlife photographer also mentioned witnessing it, but there was no picture to corroborate anyone’s claims,” he says.

Shiv then approached his seniors, requesting to set up trap cameras in the forest range where the villagers claimed to have seen the animal. “In 2016, I installed two cameras on a higher elevation area. It snowed that year. After the snow receded post-winter, I retrieved the camera in February and checked its footage. To my astonishment, the snow leopard was captured perfectly by the cameras,” he says.

After that, his excitement only grew stronger. “In 2017, a foreign researcher from the University of Chicago visited the range to conduct a study on birds. I requested him to lend us the trap cameras he had brought for his study. He accepted the proposition, and with his help, we captured two leopards with three cameras. They could be distinguished as one of them had a twisted tail,” he says.

“Now, there was confirmation of more than one snow leopard in the region. However, I always had self-complain about being unable to see it live. Close friends suggested I visit Spiti Valley, where there are higher chances of a sighting them, but I was adamant about spotting it at Lahaul,” he adds.

Since then, Shiv began exploring forest areas for long hours to fulfil his desire to witness the snow leopard’s life, which became a reality in 2019. He adds, “I have seen a snow leopard four times since then, except for 2022. I believe there are six animals, including male, female and cubs, in Lahaul. I have collaborated with a researcher to publish a paper on the same.”

“The population must have been less during the ’80s and ’90s. At present, the ibex population, i.e. snow leopard’s prey, has increased in the region, and the hunter may have migrated through forest corridors from Chamba to the neighbouring Himalayan region,” Shiv notes.

Thereafter, Shiv began conservation awareness classes about snow leopards among school children for the animal’s protection. “I also reached out to villagers to inform them about the importance of the animal, its threatened existence and the need for its protection,” he says, adding, “I am also drawing up a plan to generate livelihood opportunities for locals through tourism.”

His work of documenting the species that initiated the conservation efforts won him Sarvottam Vanya Jeev Mitra Award from Chief Minister Jai Ram Thakur in 2019, followed by India Biodiversity Award in 2021.

Shiv aims to continue his work on snow leopards and extend the conservation of Himalayan brown bears, too. “There are many man-animal conflict issues reported regarding the bear in the Dras and Kargil area. The bear attacks farmers, especially the ones growing exotic vegetables. And now it has become a matter of concern. I plan to draw a strategy to minimise the incidents with some research,” he says.

For now, Shiv finds satisfaction in contributing to the conservation efforts of the snow leopard.

“People used to claim that I would never be able to see one. But now I have proof and a lifetime experience to see the rather shy animal,” he says.