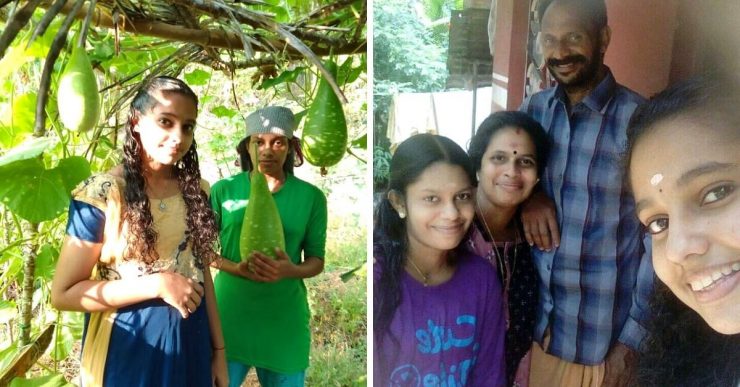 Every morning, Haripriya and Sivapriya get ready for school in Attingal, Thiruvananthapuram. But apart from their bags loaded with books and a lunchbox, there is a bag full of freshly harvested vegetables from their farm.

These vegetables are bought by some of the teachers at the school. But make no mistake — this isn’t a fun activity or a hobby. The teenage sisters toil on their farm to grow fresh seasonal vegetables to support their family. Their efforts have pulled them out of poverty and made them an inspiration in the village.

“Our father used to work in a gulf country and returned home in 2017. He then started working as a daily wager but eventually incurred heavy debts due to our poor financial conditions. We could see him in pain and decided to help him financially,” Sivapriya tells The Better India.

The 18-year-old adds that their father did not have a fixed income and the family struggled to make ends meet.

So his daughters started growing vegetables in gunny bags outside their home. “It was minuscule, but seeing our efforts, three neighbours came together to help and leased us 80 cents of land for free, which is a little less than an acre to farm,” she says.

Another challenge was that neither of them knew how to farm.

“We had only seen our grandparents do the farming at our mother’s farm. We had a vague idea about the process and methods to follow. So first, we decided to grow tapioca, which is comparatively simpler than other vegetables,” she says.

Sivapriya says the sisters did not apply any scientific knowledge to farming. “After succeeding with tapioca, we decided to grow other vegetables such as cowpeas, bottle gourd, okra, tubers and others. We did not have any money, so we used seeds from vegetables and sourced the seedlings from Krishi Bhavan, a State Government department that helps farmers,” she says.

The sisters used organic manure from nearby poultry. “The owner was kind enough to give away the manure for free. On other occasions, we used goat manure from our house,” she says.

Seeing their efforts, their parents chipped in to help with ploughing and tilling the land. “Our mother also took us for farmer training workshops at the Krishi Bhavan,” she says.

The sisters then took the produce to the local market to sell. “We also took it to school for our teachers to let them know about our farm venture. We also shared a part of the produce with the neighbours who leased us the land,” she says.

Haripriya, who studies in Class 9, says they cannot calculate a fixed figure of their monthly earnings. She says, “Ours is a small venture, and there are no fixed earnings. But the activity has certainly helped us to meet our daily expenses and cover our school fees. It has made our life better.”

She adds that they never missed any classes. “We farm in the early hours or after returning from school. We made sure that all our playtime went into farming. At times we worked at 5 pm and spent most of our weekends on the farm.”

Haripriya aims to become an agriculture officer, while Sivapriya wants to serve in the army.

Their mother, Sajitha, says, “I have always felt embarrassed about friends and in-laws seeing us struggle in life. But now the additional income is helping us earn a good living.”

She adds, “I am a proud mother of my daughters and feel relieved seeing their maturity and resilience to deal with the situation. I feel confident that even though life is hard on them, in the future they will definitely endure the situation and move ahead.”