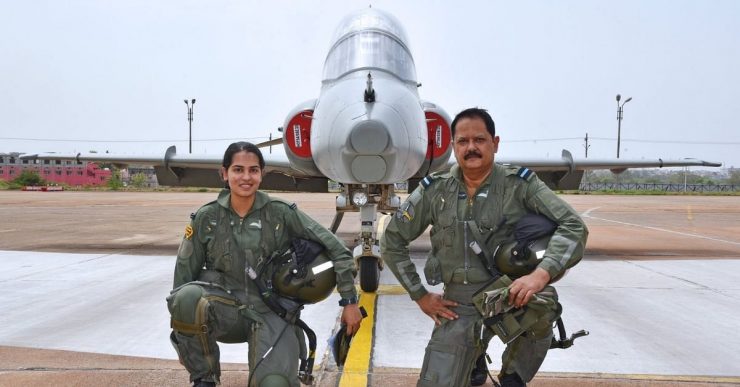 In a first for the Indian Air Force, father-daughter duo — Air Commodore Sanjay Sharma and Flying Officer Ananya Sharma — created history on 30 May when they flew in the same formation of Hawk-132 aircraft at Air Force Station Bidar.

A release by the Indian Air Force stated that this is the first instance where father and daughter were part of the same formation for a mission.

The two were more than just father and daughter, says the release. “They were comrades, who had full faith in each other as fellow wingmen would,” stated the release.

“A few days ago, both of us flew in the same formation. That was the biggest day of my life. Ananya always used to say that I want to become a fighter pilot like you. When she came for the first time as Flying Officer Ananya Sharma and saluted me, I was very proud of her,” said Air Commodore Sharma in a video put out by the IAF.

Ananya is currently undergoing training at the Bidar Air Force station. In a video put out by the IAF, she said that from a young age, wanted to be a fighter pilot like her father.

When she would ask him why women fighter pilots are not there in the IAF, he would tell her that she would become one.

Women fighter pilots were first inducted into the IAF in 2016.

“Growing up, we were always posted to fighter bases. We would always hear the sound of fighter jets. Knowing that my father is flying one of them used to inspire me,” said Flying Officer Sharma in the video.

Women fighter pilots in the @IAF_MCC continue to soar ! This is a great sight – father and daughter together! https://t.co/Y6QIRXfr1D

After finishing her B Tech in Electronics and Communication, Ananya was selected for training and was commissioned as a fighter pilot in December 2021, said the IAF press release. Air Commodore Sanjay Sharma was commissioned in the fighter stream of the IAF in 1989. He has a rich experience in fighter operations. He commanded a MiG-21 squadron as well as a frontline fighter station.