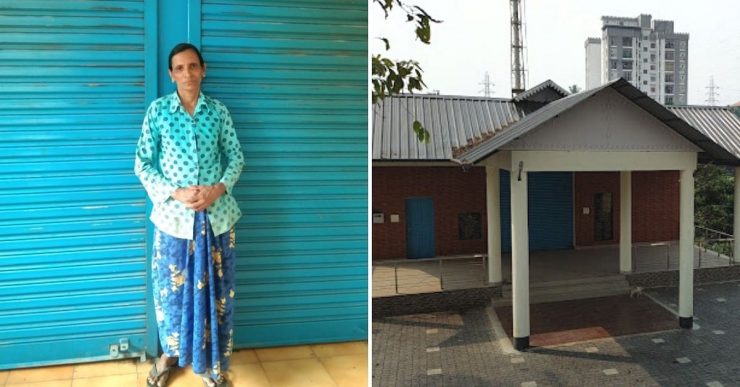 “People often ask me how I handle dead bodies on a daily basis, and if I ever feel scared,” says Selina Michael, a resident of Kakkanad, Kochi. “But I’ve never felt scared, not once in my life. In fact, I am grateful that this job has been helping me take care of my family for the past 15 years.”

For over a decade, Selina has been working as a crematorium keeper. She cleans the grounds, collects firewood, performs the cremation and, at times, other rituals — death is a part of her everyday life now.

Her work begins with a phone call from the family or friends of a deceased, notifying her that they will be bringing in the body. Selina, who stays near to the crematorium, immediately gets ready and leaves to prepare the pyre for the final rites.

“Then I get the firewood ready and wait for the body to come in,” says the 58-year-old, who takes care of the public crematorium all by herself.

Once the body is in, Selina says that she performs the cremation and waits for hours until the whole process is complete. “It takes around two to three hours for a corpse to burn completely. But if the person had some severe illness and had medicines in the body, then it might take around four hours,” she says. She then collects the ashes and charred bones from the pyre and hands it over to the relatives of the deceased.

An unusual job, but no regrets

Selina says she took up a job with such heavy stigma around it — especially when you are a woman — not out of choice, but for the need of survival. A difficult childhood and a strained marriage have made her strong enough to deal with whatever life throws at her.

“My life has always been tough. I lost my mother when I was really young and had to drop out of the school due to financial constraints,” she says.

After marriage, things got even worse with an alcoholic and abusive husband. “My husband left me and our two daughters almost twenty years ago. We don’t know where he is but then I had to find a way to make our ends meet and pay our debts off,” she recalls.

At first, she began working as a daily wage worker. Here, she would earn a meagre income which wasn’t enough for her to manage expenses, forcing her to look for other opportunities. “I got the chance to work at this crematorium through one of my neighbours, who had taken the tender for running it. I was doing some construction work at his house when he fell sick and was looking for someone to take care of the crematorium,” she explains.

“I didn’t think twice and asked if I could do it. Back then, I had no idea how a cremation was done, but was sure that I could earn a few more bucks to raise my children,” she says, adding that she learnt the basics from him and started working at the crematorium part time, whenever she wasn’t at construction work.

“I used to get Rs 225 per day from the construction work and Rs 100 per cremation. This went on for a few more years,” says Selina, who, after four years, took the tender to run the crematorium all by herself.

As a crematorium keeper, Selina is now paid Rs 1,500 per cremation. “As it is run on a tender basis, I have to pay Rs 780 per cremation to the municipality. Then I have to spend some money on buying the firewood, coconut shells and other materials. Also, I pay someone to help me with cutting the firewood. What remains after these expenses would be my earnings,” she elaborates.

“There are days when around four or five corpses come in, but on some days, and even weeks, there’s nothing at all,” says Selina, pointing out that there is no fixed income as such.

Talking about the challenges she had to face while taking up an unusual job, Selina says that while it’s definitely tough, she never had to face any challenges while at it.

“But there were a lot of people, including my close relatives, who weren’t ready to accept what I was doing for a living. I asked them if they can take care of my family or pay off my debts. Then I would stop. They didn’t have an answer for that. So, they eventually stopped bothering me,” she continues. “This job was my only hope for survival and I don’t have any regrets doing it.”

She continued with her work even during the first and second waves of the pandemic, where she single handedly managed cremating bodies of people who died due to COVID-19. “It was a little difficult during that time, when dead bodies were coming in back to back. I had to wear a PPE kit throughout, would change and wear a new one after every single cremation. But somehow, I managed,” she says.

Selina takes pride in what she does and says that she wants to continue this job as long as she can.

If you want to contact or offer financial assistance, you can call Selina at 9048126751.