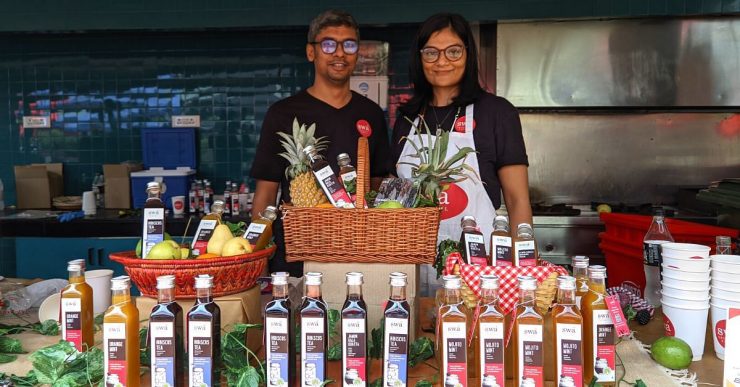 Imagine life to be like a game of Jenga. Every time you think you have made a solid foundation, something comes tumbling down.

From growing up in a joint family with cousins who were financially better off; landing a job at a startup where she was laid off for being pregnant; to then launching a brand just before COVID-19, life has been anything but smooth for her.

However, through it all, Vaishali has managed to stay focused on what she wanted to achieve.

With her co-founder and husband Sumir Mehta, she launched Swa Juicery in 2015 and eventually Swa Artisanal Syrups in 2019,, with an initial investment of Rs 8 lakh. Today, the company is making a revenue of Rs 4 crore annually, and has fulfilled over 10,000 orders so far.

‘Becoming an entrepreneur was aspirational’

Vaishali describes herself as someone whose life is heavily influenced by food. As a Gujarati raised in Kolkata, she says she grew up enjoying the best of both worlds from a culinary perspective.

Meanwhile, Sumir grew up in Raipur, Chhattisgarh, and went on to complete his engineering before working with an IT firm, until he quit to become an entrepreneur.

“I grew up in Kolkata’s Bada Bazar, which is comparable to Delhi’s Chandi Chowk and Bengaluru’s Chickpet. Being in a joint family meant that at any given time, there were close to 20 to 25 people at home. It was a lower middle-class household where all my cousin sisters were married by the time they were 21 years of age,” Vaishali tells The Better India.

She says the economic differences she felt in a joint family were stark. Her uncles were businessmen and her father chose to work in the company. “I did have a very keen interest in business while growing up, but knew that I had to have a solid educational background to help me realise that dream,” she says.

In fact, for both Vaishali and Sumir, education was extremely crucial.

“It was our ticket to leave our old life behind. We worked extremely hard to make sure that we got a fair chance at finding success in life,” says Sumir.

While pursuing a mass communication degree from St Xaviers, Kolkata, Vaishali took on various odd jobs to ensure that she was financially stable and able to pay her fees.

“I also started working as a freelancer with ad production houses while in college,” she adds. After completing her graduation, she moved to Pune to pursue a degree in management. “I passed out of college in 2009, the year of the recession. It felt like rotten luck would just not leave my side,” she says.

Vaishali moved to Bengaluru after finding a job in the city, and says it was one of the best decisions she made. “Bengaluru felt like home the minute I got here. It was welcoming and allowed me to grow like no other city had. It was also here that I met my husband and we got married in 2010.”

Subsequently, the couple moved to New York and while Sumir was working, Vaishali had to go back to being an intern, since her Indian college degrees were not widely recognised. “It was frustrating, having studied so much and having the requisite work experience to go back to being an intern. Nonetheless, I learnt on the job and eventually managed to land a job in New York as well after the recession,” she adds.

The desire to do impactful work over chasing success pushed the couple to move back to India.

“We felt we could do much more being in India and that is how we came back in 2013,” she adds.

“When we came back from New York we were surprised that despite having access to all the fruits and fresh ingredients here, one was still getting sold artificial and preservative filled concentrates. New York gave us the taste of fresh fruits, foods, and juices. We wanted to replicate that here,” adds Sumir.

It was to fill this gap that Swa Artisanal Syrups was born. “Each syrup bottle is hand crafted by women and is 100 per cent natural. It took us two years of R&D and countless recipe trials to launch the products that we have,” says Vaishali.

The venture launched officially in 2015 as a cold-pressed juicery with Vaishali at the helm. Sumir would take the plunge five years later, when he quit his IT job and joined her at Swa.

With real fruits and 100% natural ingredients

Sumir says, “At Swa, we use only real fruits, herbs, and spices from India. We are very conscious of staying clear of adding preservatives or artificial flavours of any kind. Blends like Jamun Kala Khatta, Guava Chilli, Orange Mint, Hibiscus Tea, Lemon Ginger Nariyal Paani, Mango Passionfruit, Jackfruit Cascara, and Cocoa Mint are amongst the 16 flavours available in the retail market, while the B2B segment has over 50 flavours.”

Anirudh Sharma, Co-founder Third Wave Coffee Roasters says, “We have been working with Swa for almost three years now, and I must say it has given us so much joy working with the product and the team. The syrups just stands out, it elevates the beverage, because it’s natural. Even something as generic as iced tea becomes special with Swa.”

He goes on, “I have had the opportunity to work very closely with Vaishali to create crazy combinations and syrups that compliment coffee or something else I want to serve at Third Wave. Beverages made using Swa are loved by our patrons. The range that Swa has is unique and no one else in the market has it. “

Swa let their products evolve as per the market requirement.

“We looked at filling a gap that existed in the market and did not necessarily force fit what we wanted to sell into the market,” Sumir adds.

“To make yourself the perfect glass of drink, all you need to do is mix one part syrup, with six parts of water or soda, add ice, and serve. It’s that easy. We do all the work for you,” says Sumir.

With a shelf life of about six months and priced at Rs 300 for a 250 ml bottle, Swa products are available across online and offline retail platforms.

The business also employs women from marginalised backgrounds and trains them under a skill upliftment programme, giving them a chance to gain financial independence and in some cases, build careers.

“These women are the foundation on which Swa has been built.”

“They are running the production facility brilliantly. One of the points in our vision statement is to build wealth for women. We have already offered small equity shares to some of the employees who have been with us since the beginning,” she adds.

Shabin Taj (39), one of the employees at Swa, has spent over six years with the company. “I not only learnt on the job, but also understood the importance of being financially independent. I have three sons, and my eldest was diagnosed with cancer and had to undergo treatment. My second son is pursuing a degree in college and the youngest is in Class 7 now. With my salary, I have paid for medical expenses and am now getting my boys educated.”

She continues, “I am proud of all that I do and the support I get from my fellow workers at Swa. I have immense respect for Vaishali didi. She helped turn my life around.”

‘All my job experiences taught me what not to do’

Some experiences Vaishali went through have made her resolve as an entrepreneur stronger, she says.

“I now know exactly what I should not do. Having joined a startup in Bengaluru, sharing the news of my pregnancy with them became the worst thing I could have done. Not only did their attitude towards me change, but eventually, I was laid off while in my seventh month of pregnancy,” she recalls.

Angry and deeply humiliated, Vaishali channelised those emotions into building her company. “I vowed to build a company, where no woman or individual, would be made to feel the way I felt at that point. This is where the purpose came from,” she adds.

Click here to know more and place your order.