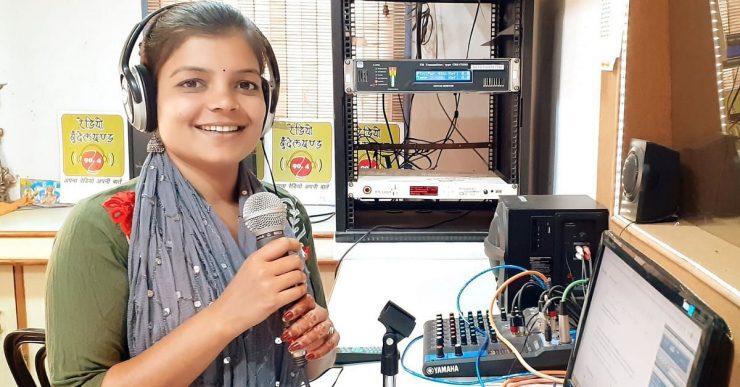 In the small town of Orchha, located in Madhya Pradesh’s Bundelkhand region, Varsha Raikwar’s voice rings with clarity. For the last five years, the 25-year-old has been educating hundreds of villages about climate change and environmental degradation.

Here, she talks about bringing in a better tomorrow while addressing issues of local interest. “I address small issues like why it’s important to save electricity and water, why there should be greenery around us, why planting trees is vital, and more,” she tells The Better India in an interview.

Raikwar started jockeying full-time in 2017. Prior to this, she didn’t know much about climate change. But the seed of interest was planted at home.

Growing up watching her father work as a farmer, she noticed that while earlier their crops grew in abundance, over the years their yield was slowly starting to reduce, thanks to droughts and irregular water supply. “When I asked my father why that was happening, he simply said that this was God’s wish. But I wasn’t convinced, and wondered why it had to be like this.”

This led to her searching for answers and the more she understood how the changing environment is affecting farming, the more her interest piqued. She also understood the immense importance of jungles, rivers, and the natural ecosystem around her. “As climate change made itself more evident, the largest impact was on the crops,” notes Raikwar.

She also realised that many people lacked awareness of the connection between the environment and farming. The radio, she found, was a great tool to bridge this gap.

She learned about radio jockeying through a friend, back when she was in Class 8, and started interning at Radio Bundelkhand soon after. For Raikwar, who loves singing and performing, speaking on the radio seemed like an instant fit, a eureka moment for her. But the road to doing what she wanted wasn’t easy.

Her conservative family was not supportive of her dream of working, and instead wanted her to get married and settle down, like other girls. “I wanted to break that tradition, and do something different instead of just following the existing rules.” Raikwar also had to deal with facing harassment as she travelled to and from work.

As she settled into work, with great support from her colleagues, she slowly gained a better understanding of the various environmental issues the world is facing today. Among them, she realised, was the lack of interest that villagers around her seemed to display about climate change.

To make things more engaging for listeners, the journalists at Radio Bundelkhand decided to add a segment called ‘Bhairo Bhoji.’ This is a cheeky dialogue between a woman who cares deeply about the environment, and her irresponsible brother-in-law, where she educates him about climate change.

The impact of a voice

The show also makes it a point to talk to people about topics like organic farming, the importance of sustainability, and more, making sure that the dialogue is always two-way. They also started organising street plays, commissioning wall paintings, and used various art forms to spread awareness about the issue.

Among their activities was running a rural reality show on radio, funded by the World Bank, called Kaun Banega Shubh Kal Leader? For this, they selected 100 villages to participate and encouraged activities like kitchen gardens, agroforestry, and rainwater harvesting.

While this was a reality show where people were eliminated, Raikwar noticed that the practices they had put in place during the show continued. It had not only spread awareness about climate change, but also brought about real, tangible transformation in people’s behaviour. “Even today, people call us and tell us what they’ve done in their village,” she says.

Her colleague Manish Samadhiya also attests to the fact and says, “When we started out, people’s general attitude was ‘Why should I care [about climate change]? What’s in it for me?’ But slowly, people started understanding,” he says.

Now, audiences themselves call the station and talk about their activities, like the trees they’ve planted or the steps they’ve taken to implement agroforestry in their farms. As a result, the MP government’s Agricultural Department is also sending out trainers to educate villagers about healthy, sustainable farming practices. “We don’t even need sponsors now. People of the community come together and contribute so we can put up a show that will educate more people about climate change,” Manish adds.

Through all the games and other fun activities, Raikwar’s core message doesn’t falter. She’s hyper-focused on the environment, reminding people that while money and owning a house are important, having clean air to breathe and fresh water to drink is more paramount. A healthy environment is her main concern.

Between record-breaking heat waves and viruses like COVID-19, she’s also reminding people how unimaginable disasters will keep coming our way if we don’t take action. “Every single person needs to work toward this, even if it’s a small step. Collective action can save us from the oncoming climate emergency,” she says.