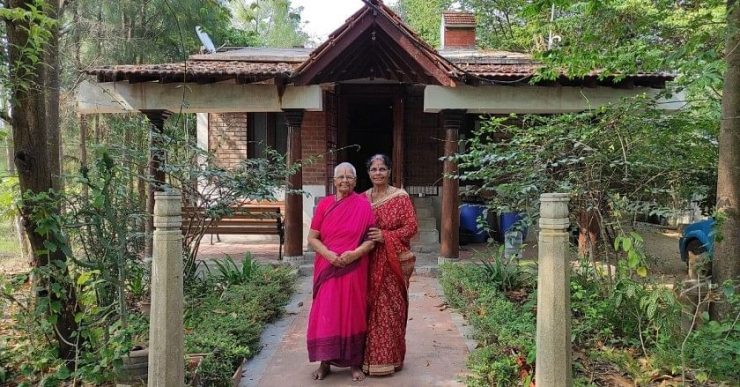 For several years, Laxmi Ammal and Kasthuri Sivaraman (a mother-in-law and daughter-in-law duo) lacked the confidence of being independent. Both of them grew up in conservative households where they did everything their parents told them to do.

There, women were not encouraged to think independently and to a certain extent discouraged from expressing their opinions. Moreover, while Laxmi (89) studied only till Class 3, Kasthuri (71) completed Class 7 in a Tamil-medium school. After marriage, they followed their husbands’ orders.

It can be daunting for some to make decisions and take action when they are habituated to getting directions from others.

So when Kasthuri’s son, Kiruba Shankar, suggested they run the family’s farm stay in 2021, the duo was scared and underconfident. But with the family’s support, they broke away from their fear. 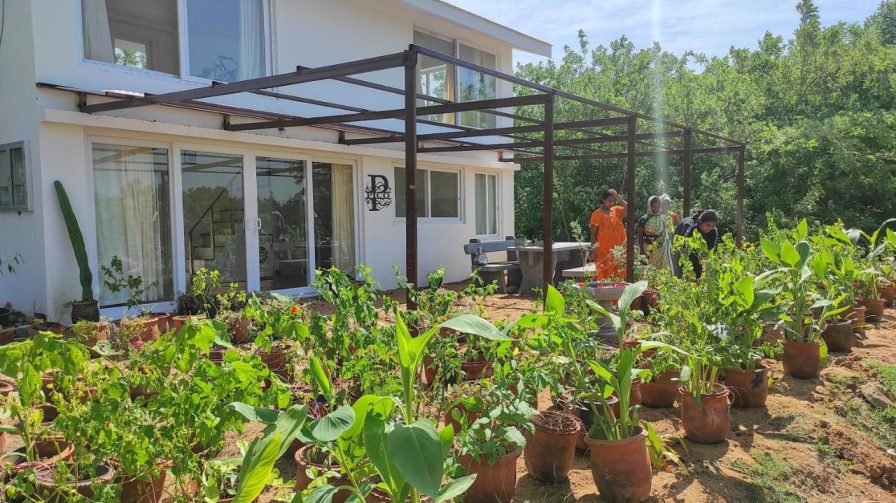 Pico farm stay was built in 2012 on their 185-year-old organic farm in Tamil Nadu’s Rettanai village but it was only open for relatives and friends back then.

“The only regret we have is why didn’t we start this earlier,” begins Kasthuri. “I used to always wonder who would come to our farm stay hosted by two old women who knew to converse only in Tamil. My mother-in-law would be scared of interacting with strangers. But we shed away our inhibitions and hosted people who wanted to get away from their hectic lives. This has been the best decision we have taken.”

Running a farm stay that is nestled amidst a vast agricultural ‘Vaksana’ farm can be physically exhausting, especially for senior citizens.

And it would be wrong to assume these ladies have superpowers to do it all because they do get tired. There are days when they rest more and work less. Nevertheless, Pico has so far hosted over 200 guests, with an average of 10 guests every month. However, the initial weeks were difficult.

“Due to the lockdown, we did not get any guests for nearly six months. One time a bunch of Youtubers visited who gave us positive reviews online and even made a video. That helped us get popular quickly,” says Kasthuri, who is now learning to surf the internet so that she can read the reviews herself.

On a Tuesday afternoon, Laxmi and Kasthuri get candid about their experience of running a farm stay and what it takes to be a good host.

A Farm Stay That Was Once a Barren Land The Vaksana farm spread across 13 acres is an ancestral farm where every generation has grown crops. When Laxmi’s husband passed away 37 years ago, her son took over the agricultural activities.

And when it was Kasthuri’s son Kiruba’s turn to take over, he chose a different career in digital marketing. For several years the land remained barren and unused.

However, in 2011 the family took a collective decision to bring back the greenery by developing a food forest, harvesting crops and building a farm stay for their guests.

Laxmi shares, “It was a family activity. Each of us, including my great-granddaughters, contributed to planting various trees. So many of our relatives started visiting us after our farm was ready. They wanted to take a few days off from their urban lives and spend time in peace and serenity.” 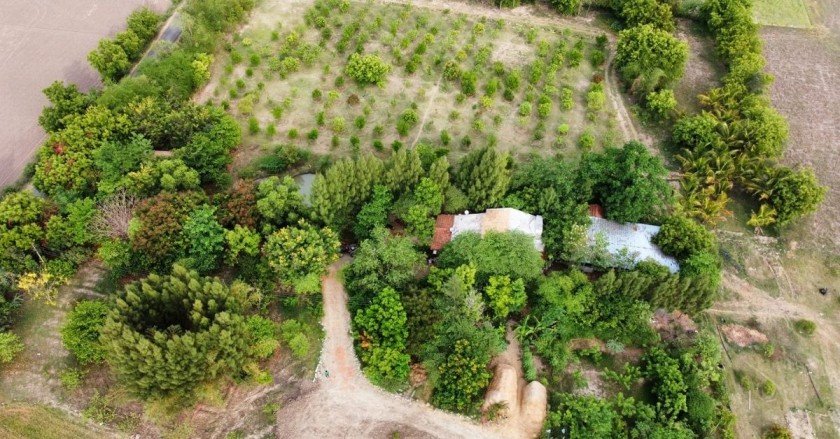 The land is divided into different sections. One section consists of trees like mahogany, timber, sandalwood and mango. Another section has paddy cultivation. The family has also come up with a ‘Mandala’ concept. The area is shaped like a maze where vegetables like tomatoes, brinjals, cauliflower, beans, cabbage, etc are grown organically.

The farm stay also has five ponds across the field meant to capture and harvest rainwater. The saved water is used for growing fish.

Although the family has hired labour to look after the field, Laxmi and Kasthuri enjoy tending to the plants and trees. They are often spotted in the Mandala area plucking ripped vegetables and fruits for the guests and family. 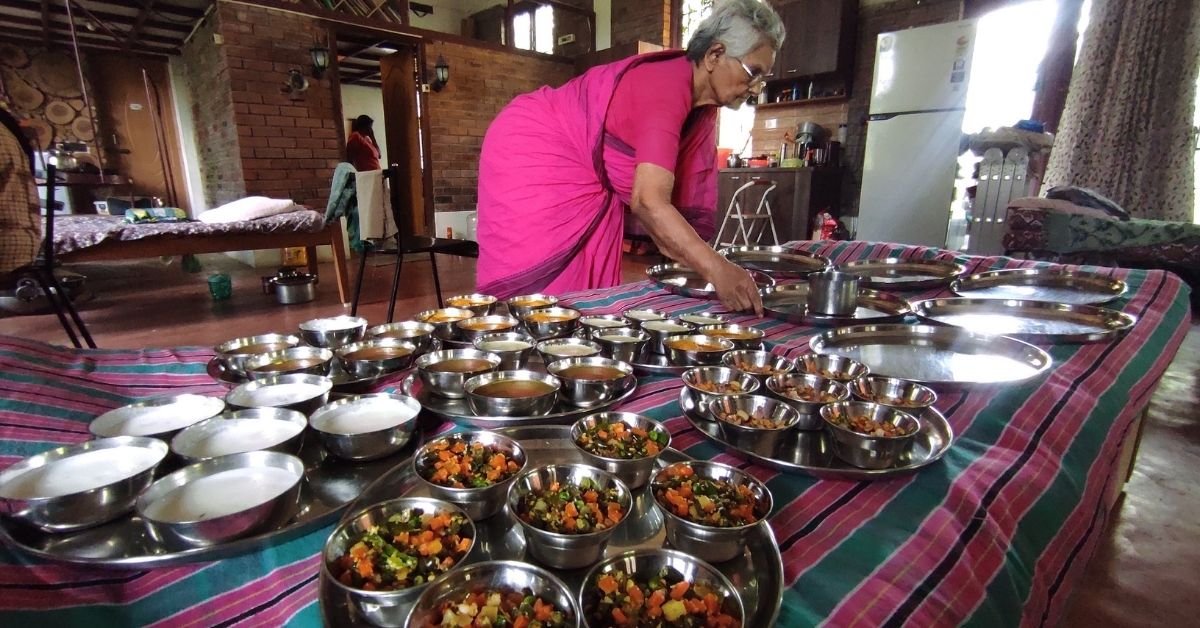 Although the duo has no wanderlust experiences, they were actively involved in how the farm stay will look like. They were particular about giving a unique experience to the guests while providing them with modern amenities like ACs, washing machines, television, internet and more.

“We wanted to add the touch of our local experiences, especially the cuisine. There may be hundreds of farm stays but we wanted to add our unique touch. We started the construction of the house by first building large windows that would allow ample natural light and breeze inside,” says Kasthuri. 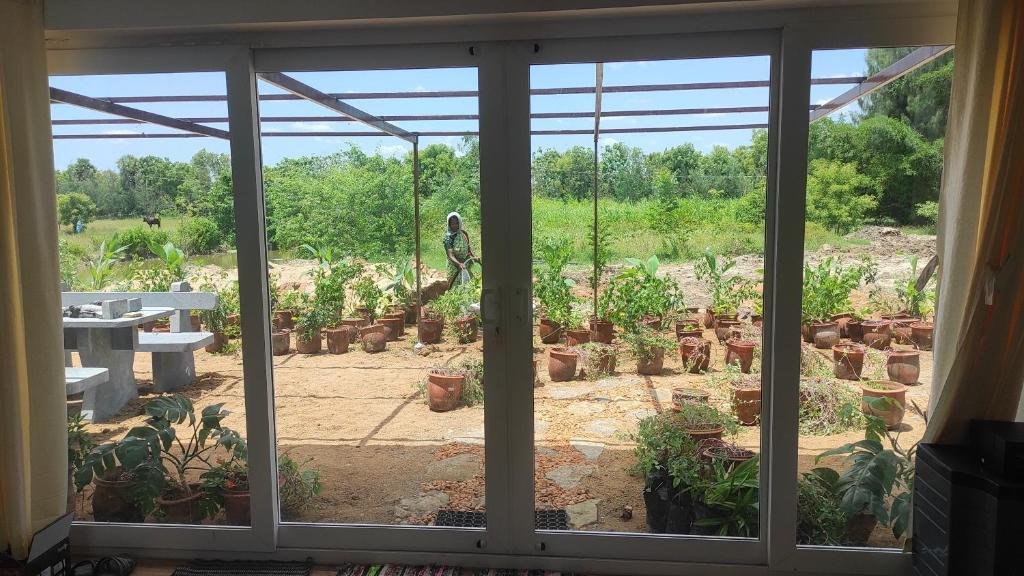 The house has wooden flooring, two mini-libraries and several indoor plants that keep the air clean. Every part of the house has an outside view of the farm.

“Living on a farm is an experience everyone should have. The large windows give the guest access to the trees, crops and vegetables being harvested at any given point. There are no roads, vehicles or people around. It respects your privacy while giving you a chance to live in nature,” says Laxmi.

Laxmi and Kasthuri have taken special efforts to prepare the food menu. The vegetables and fruits grown on the farm are used to prepare different delicacies. The ‘Sembarati’ or hibiscus juice is a favourite among the guests. The ‘sangapu’ juice (Asian Pigeonwings) is prepared with lemon and honey which is refreshing and healthy. The pleasure of serving local food grown by the family makes them forget their age-related ailments, says Kasthuri.

One of their guests, Priya Velu, shares, “The best part of staying at Pico was tasting the food complete with ancestors’ secret recipes prepared by the grandma (Laxmi). The ever-smiling grandma was the most adorable host. I could tell that these women are not just in it for the money. The interior of the house is so peaceful and distressing. For the first time, my golden retriever had space to run around in the farm stay.”