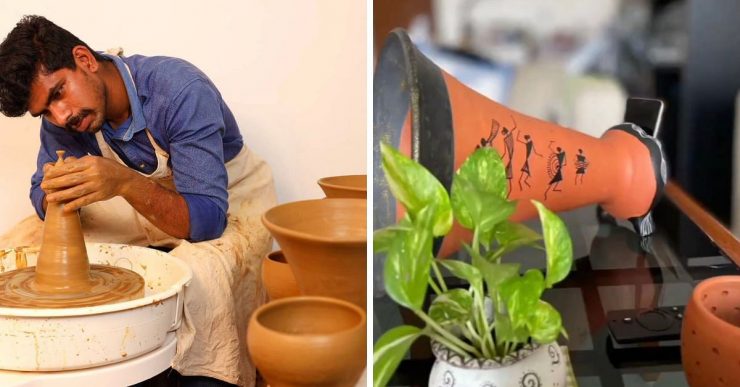 Growing up, Nilambur native Sivaprakash K was always fascinated by his father’s pottery skills. For a while, he tried his hands at a computer hardware job, but it didn’t take him too long to realise that he was going to follow in his dad’s footsteps.

“It was my elder brother Sivadasan, product designer at Sargaalaya Arts and Craft Village in Kozhikode, who inspired me to take up pottery. During school and college, I used to help my father with his work, but I never thought of a career in pottery,” the artist told The New Indian Express.

Sivaprakash started off by making miniature pottery art. The intricate and time-consuming process, in which he makes tiny pots and bowls, helped him gain immense popularity on social media.

His latest creation is a terracotta acoustic amplifier, or kaliman kolambi, which uses no electricity to play loud music from phones. “I got the idea after reading about bamboo speakers. Now I make small and big versions of the amplifiers in different textures and prints,” says the artist.

“Earthen speakers render a bass sound effect, which enhances the audio. I have also recorded a video of making terracotta speakers for aspiring pottery artists,” he adds.

Sivaprakash works at the Kerala Arts and Crafts Village (KACV), Kovalam and sells his products both online as well as offline.

Here’s a look at the intricate process of making these unique speakers: