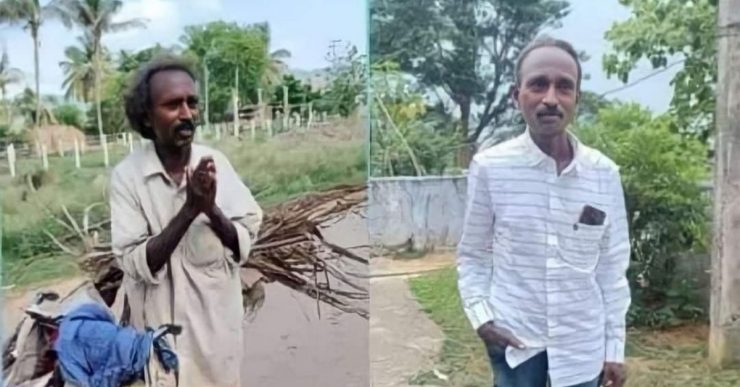 On Tuesday, Allaka Kedareswara Rao had the biggest smile on his face. He was finally going to achieve his dream — that of being a government teacher. Now 57, Rao has spent the last two decades of his life waiting for this job.

A resident of Seedhi village in Srikakulam district of Andhra Pradesh, Rao cleared the District Selection Committee (DSC) exam in 1998. However, due to legal issues and government hold up, the candidates who passed the DSC in 1998 did not get allotments. Some of them have been waging a legal battle since then.

Now, the State government has finally cleared the 1998 DSC file. Rao wasn’t even aware of this — it was the villagers of Seedhi who informed him. They showed him the Order and his name on it.

Villagers celebrated his success by buying him a cake and honoured him. This is not just a victory for Rao, but for thousands of candidates who cleared the exam in 1998.

Rao lost his father at a young age and his mother died a few years ago. He has a younger sister who is married. He says he is single as he vowed to marry only after getting a job.

He finished his Bachelor of Education (BEd) from Annamalai University in 1992, and then started attempting the DSC exams. This is the qualifying exam to recruit government teachers in Andhra Pradesh.

He then started trying for other jobs and even moved to Hyderabad for a few years with his mother.

Unable to secure a job that matched his qualifications, Rao took up a job in a garment store in Hyderabad. However, he was mentally affected by the fact that he did not get a teacher’s job.

The stress on his mind forced him to come back to his village about eight years ago.

His mother’s death only added to his woes. He was depressed and began cycling from village to village to sell clothes for a living. Some days, there would be no sales. On such days, he did not even have a single meal. He says no one was there to help him.

“My aim in life has been to become a teacher. I studied and cleared the exam. Due to legal issues, it has taken so many years for me to realise my dream. I did not even marry as I couldn’t provide for a family,” says Rao.

He says that when Chief Minister YS Jagan Mohan Reddy was on his Padayatra, he met him and asked him to clear this file.

“When the CM visited our village during his Padayatra, I happened to meet him. I shared my problems with him, and he promised to clear the 1998 DSC file, which he has done. I am grateful to him,” adds Rao.

Villagers say that Rao has lived in abject poverty all these years with steely determination that if he works, he will work as a teacher. His inability to get the job of his dream, all because of a legal issue, cost him 24 years of his life.

On Tuesday, he was given a haircut by the villagers, and some new clothes. The change in his appearance was remarkable. Videos of the same were widely shared on social media.

He now says that he is ready for any posting. He wishes to teach Classes 6-10 and is willing to teach any subject given to him. Rao is proof that dreams can be achieved at any age. A job that should have been his when was 33, will come his way only now.

This file that was finally cleared 24 years too late doesn’t just help Rao, but also more than 4,000 people from the 1998 batch, who faced the same plight. Some of those who qualified have waged a long legal battle. They approached the Andhra Administrative Tribunal and the High Court and got rulings in their favour. Yet, it was of no use, till the State government finally decided to clear the file 24 years later. State governments, which conduct most of these teacher tests, must ensure that such delays are not repeated.