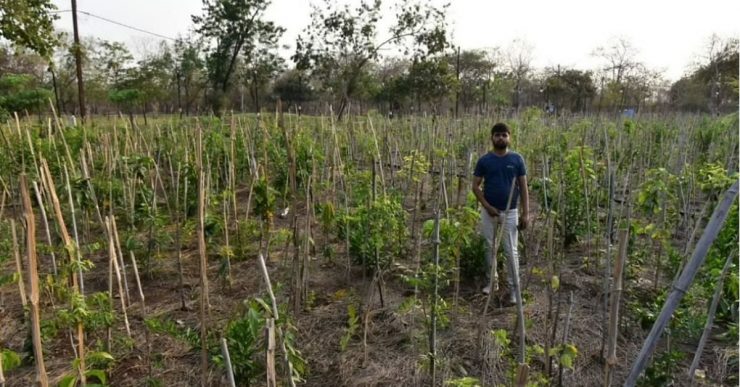 Born into a lower-middle-class family and brought up by a single mother, Vishal Srivastava was always aware of the hardships of life. He faced water and electricity issues and even ran behind tanks to collect drinking water. His circumstances made him read and research water scarcity and other environmental issues. He even started working with many NGOs.

In 2019, during the second year of his engineering studies, Vishal visited many drought-stricken areas of Gwalior with a team from the NGO called Prayas. From there, he started to get involved in activities like planting trees, donation hunting to buy water tanks and much more.

Within three years, the youngster has planted around 3 lakh tree saplings with one more lakh being under process.

“Cutting of trees is the primary reason behind serious environmental damages like water shortage and even climate change. Realising this, I started planting trees, which became my breakthrough in life,” shares Vishal to The Better India.

Vishal was not interested in joining an engineering course. But having secured a seat in a good college and the need to support his family compelled him to take up the same. “This is my final month here in college and I have already been offered jobs from three different companies,” says the 23-year-old.

Working closely with Prayas in Marathwada, Aurangabad, he says, “This place has witnessed many rain-related casualties over the years. I used to read about it in the media. Being there, where the incidents happened, was a life-altering experience for me. I thought about how I could help and formed a group in my college to support the farmers there. Together, we deposited about Rs 15,000 to Rs 20,000 [in their accounts].”

Prayas mainly plant trees, for which they adopt the Miyawaki technique, which he soon learned. After a while, he roamed around government offices, describing and teaching them the features of Miyawaki forests too.

After visiting locations with scarce greenery, he then prepares a plan for the place and takes it to the collector’s office. Since he does this on a volunteer basis, he never asks for money. Slowly, he started being commissioned for governmental projects. Along with other members he planted 50,000-60,000 tree saplings in Gwalior, 20,000 in Jabalpur and 10,000-12,000 in Katni. “I am currently in Chhatarpur, Madhya Pradesh, for a project to plant 1 lakh tree saplings,” says the engineering graduate, adding that Khandwa and Shivpur are the upcoming locations.

Vishal explains, “We take care of many things while planting trees. Some are planted only for greenery. In other places, fruit trees are planted so that the neighbourhood labourers can get employment during their harvest time. We plant more saplings in rural areas, in which we also get support from the panchayat.”

He proudly adds that all the saplings he has planted so far have grown into big trees and hardly any plant has been damaged. “We seek help from the neighbourhood people to take care of the trees. That’s the secret of this huge success,” he says.

Along with planting trees, Vishal contacts the best NGOs in the country to improve the condition of the villages and schools around him. Recently, he helped digitise 100 schools in Madhya Pradesh in association with Akshar Foundation based in Guwahati. Through this, he is trying to run the National Education Policy (NEP) smoothly in the schools. In the coming years, he says he wants to start a consultancy firm along with his job so that he can help government officials in implementing policies at the grassroots level.

Read the story in Hindi here.