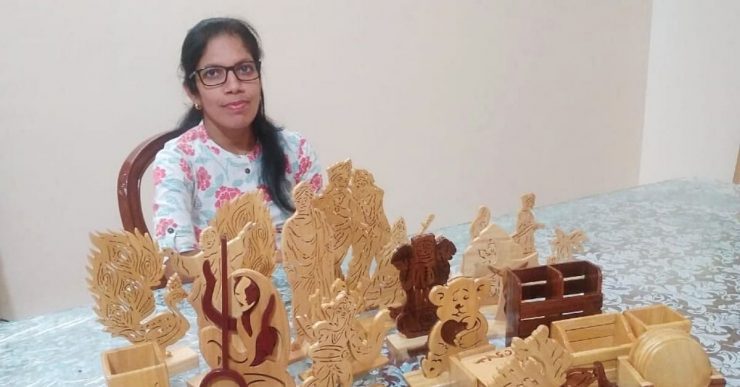 A few weeks into her marriage, Madhumita Shaw’s in-laws began harassing her for dowry.

Even as the act is legally banned in India, it was not enough to stop her husband’s family from making constant demands.

Madhumita, a native of Ghatsila in Jharkhand’s Jamshedpur city, had got married in 2012 through an acquaintance, and settled with her husband in West Bengal. Like everyone else, she had wished that her marriage would culminate in a long-term relationship.

“I wanted to be happy in my married life and live comfortably. But soon after settling in a new home, my in-laws started making unrealistic demands for gifts. Initially, the demands were smaller, and my father fulfilled some. However, the number of requests increased with time. The in-laws would taunt me, pass harsh comments, and mistreat me if the demands were not met,” she tells The Better India.

The 39-year-old says that six months after her marriage, her in-laws demanded Rs 1 lakh from her father. “There was no way my father could arrange that huge amount, and I realised that such demands from my in-laws would never end. My husband was also unsupportive. So I blatantly refused,” she says.

The result was that she was thrown out of the house. “Initially, I thought that I would cope with the torture and try to convince them over time. But after their extreme step, I decided to give up on the relationship and returned home,” she says.

Today, Madhumita has slowly and steadily rebuilt her life. And it’s not just her that is thriving as a result — hundreds of tribal women across Jharkhand are also financially empowered and independent thanks to the entrepreneur’s vision. She is doing all this and more through her organisation Peepal Tree.

All those years ago, constant harassment and losing her relationship had pushed Madhumita into depression, she recalls. “I felt low, and people in my village also taunted me. It became difficult to live in an unfriendly atmosphere — people around me said that I would never be able to get back on my feet and would have to give up on my life,” she says.

But her parents thought otherwise. They put complete faith in her and supported her during her emotional turmoil.

Soon, she realised that the phase could not continue for long. “I realised that if I continued to live in a low emotional and mental state, I would only fall deeper into depression. I decided to get out of it,” she says.

An opportunity came knocking around 2014, when she visited Jamshedpur and saw some people selling keyrings made from wood on the roadside. “The product interested me, and I kept thinking about its commercial prospects. I thought of experimenting and turning it into a business for myself,” says Madhumita, who holds a diploma in retail management.

She reached out to artisans she knew in her village, and convinced them to teach her the art of carving keyrings from wood. “By 2015, I had persuaded three tribal women to make the handicrafts. The women in my village were leading a suppressed life like I did, and I felt that if they became financially independent, they could resist and prevent the torture I went through. I wanted to bring a positive change in their lives,” she shares.

A year later, in 2016, Madhumita launched Pipal Tree, a social enterprise that works on empowering women from tribal communities via financial independence.

“Initially, we sold keyrings, but then researched more products and decided to extend the varieties. We developed wooden trays, pen stands, and more, and presented them at exhibitions. We also sold them door-to-door and received an impressive response,” she says. Later, the women found a small space in front of a furniture shop. “The owner was kind enough to share her space for our business. The shop was in a prime location, and again our products received significant demand. We continued to progress,” she says

Since then, the social enterprise has trained over 200 women, each earning an average of Rs 15,000 a month. The venture offers over 200 handicraft items, including coasters, nameplates, house decor items and others, earning revenue worth Rs 60 lakh per year.

Mamta Namata, an employee of Pipal Tree, says, “I had never worked in my life and was a homemaker. But one day, I decided to attend the handicraft making workshops organised in our village. Since then, I have never stopped earning money for my family,” she says.

She earns about Rs 5,000 to Rs 7,000 a month, depending on the business. “I have been able to cover tuition fees for my children’s education and some of the daily expenses. I do not rely much on my husband,” she adds.

Pipal Tree has established product centres in Potka, Ghatshila and Matladih in East Singhbhum district. Women can work at these workshops or choose to work from home.

“Today, the demand is so high that we fall short on production. We are now working to rope in more artisans to meet the market demands,” Madhumita says.

Besides, the social enterprise also provides vocational training to girls in 16 residential schools located in Jamshedpur, Ghatshila and Ramgarh, and supports an orphanage in Golmuri of East Singhbhum, she adds.

Madhumita says that her journey towards establishing and empowering women has helped her grow in multiple ways. “Earlier, people used to question my potential and doubt my capabilities. But now that I have proven myself, they admire and respect me. Also, many homemakers receiving secondary status in the family now have a crucial role in making decisions,” she says.

She adds, “I want the business to expand further and empower as many tribal women as possible to pull them out of poverty and social barriers.”