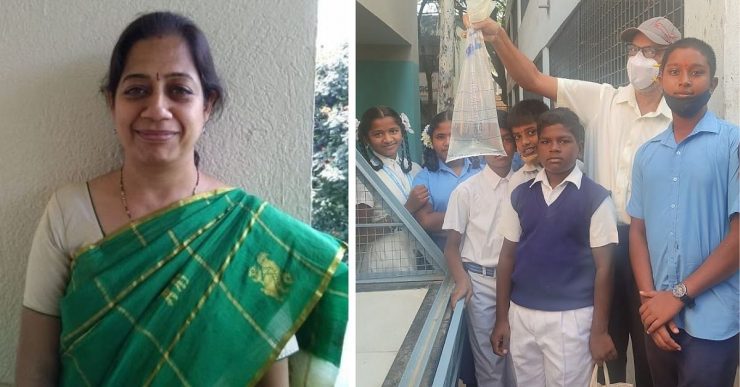 One of the main sources of water wastage in a country that is as water-stressed as ours are the taps that people use for washing.

Using a conventional tap that is running fully, an average of 20 second-hand washes consumes close to four litres of water. Multiply that by the number of people, and we have a pretty mind-boggling number.

This has been a constant source of concern for Lalithamba Vishwanathiah, a resident of Bengaluru’s HSR Layout. Driven to fund solutions for this, she came up with the idea of using aerators and water restrictors – simple devices that can be simply affixed to a tap, which instantly cuts water usage by three times while retaining the washing efficiency.

Speaking to The Better India, Lalithamba says, “I have been involved in various social initiatives for almost 13 years now. From solid waste management to issues about the electricity and water board, I have over the years found myself part of various committees and working groups to restore Bengaluru’s lost glory.”

She says that having local initiatives is important.

“We cannot expect the central government to step in and solve our local issues. It is up to us as citizens to come together and solve them,” she says. Lalithamba also runs a crockery bank from her home and stores close to 200 crockery and cutlery sets which she gives out for free to people who have events at home, to promote zero-waste living.

‘Water will soon be a traded commodity.’

“Water is the building block for everything essential. The lack of it is sure to cause the outbreak of the next big war,” she says. There are top-down approaches that capture water and provide us with the ability to reuse water — namely recharge wells, rainwater harvesting and sewage treatment plants, which can deliver impact at a large scale to communities. While rainwater harvesting is being done, sewage treatment plants within buildings and communities can be a challenge due to space constraints and capital costs, which can be upwards of Rs 30-50 lakhs.

Lalithamba also understood that there is a bottom-up way of conserving water i.e. using devices that can limit the consumption of fresh water for certain tasks like handwashing, etc, thereby reducing water stress. She also understood that the best way to deliver impact at scale is to target spaces in which a large number of people converge, as the water consumption is visible. This insight led her to her project of installing water restrictors and aerators in taps.

Over the last month, Lalithamba has installed 125 aerators in schools, marriage halls and conference halls.

In doing this she claims she has helped potentially save over 18 lakh litres of freshwater month-on-month.

Moreover, she has done this by spending only close to Rs 12,000. The installation of an aerator or water restrictor takes hardly two minutes. While an aerator is affixed to the tap nozzle, a water restrictor is placed between the water inlet and the tap. With these two simple devices, water consumption can be reduced to one-quarter of the earlier usage.

“These devices, hardly costing Rs 100, help save an average of 10 litres a minute. Over a month, this can make up for its costs. Schools and marriage halls have saved close to 15,000 litres a month, by installing these simple devices,” says Lalithamba.

Her ask is simple – the authorities mandate the use of these devices in public places. She also says that several CSR funds are going into building community toilets and wash areas. Lalithamba requests that these devices be installed in the taps as part of their construction, and also when newer taps are installed.

While these are small fixes the impact they deliver is phenomenal. Lalithamba proves that change does begin with one’s self and need not involve large communities or resources to make that difference.