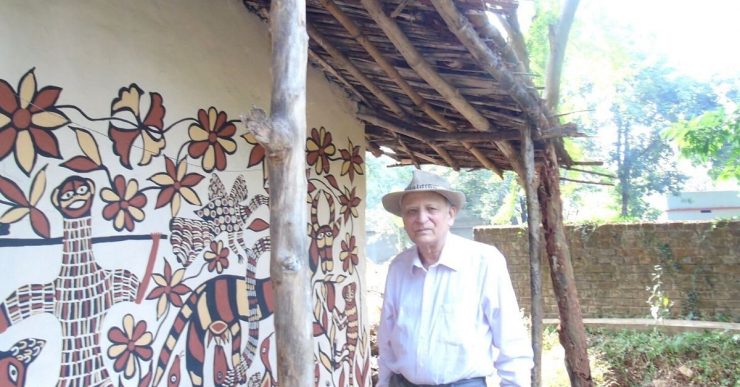 On the premises of a large house surrounded by trees in Hazaribagh, Jharkhand, curious visitors queue up inside the Sanskriti Museum that houses old rock paintings that are about 10,000 years old. They belong to the Mesolithic, Chalcolithic and Neolithic eras.

In the same complex are a few students learning Sohrai and Khovar paintings. Their eyes remain fixed on Bulu Imam, who is explaining the similarities between the ancient rock paintings, murals drawn by tribal women artists on the house walls and the motifs his students drew.

Bulu, now a noted historian and Padma Shri awardee, has spent over two-thirds of his life exploring, identifying, studying and preserving the ancient art that could have got erased in a mining project.

Interestingly, the 79-year-old never had any liking towards art or academic knowledge. Belonging to the family of politicians and diplomats, Bulu was a big-game hunter who followed in his father’s footsteps to hunt animals that posed threats to human life.

But he admits, “We never pursued hunting for pleasure.”

However, in the mid-1980s, he turned to activism when he learned about a mining project threatening the existence of 300 tribal villages. “I was roaming around the state with a British traveller and writer Mark Shand when I saw dense forest areas getting destroyed by the state officials,” he says.

Shocked by the mass-scale destruction of the forest, he approached the forest officials who were acquainted with his work. “I learned that the Central Government had allotted contracts to mine 6 million tonnes of coal at 30 sites in Damodar valley. I decided to oppose the decision and spearheaded a movement,” he recalls.

Bulu says the mining would’ve displaced the tribals and affected their livelihoods as their lives depended on the forest. “They also worshipped sacred rocks, some of which were megaliths dating back to 2,000 BC,” he adds.

Eventually, he dedicated his life to saving the community and the wildlife in neighbouring regions by preventing the destruction of local culture, biodiversity and distinct animal habitats.

Recognising his work, in 1986, INTACH, a Delhi based NGO working towards preserving the heritage, approached him by designating him as a convener for the organisation and running the campaign with their support. “In 1987, I conducted various campaigns to stop the mining activities from Damodar valley to Hazaribaug,” he adds.

His entry into the ancient art happened simultaneously when one evening in 1991, an Australian Jesuit priest, Father Tony Herbert, approached him with news of some red markings found in one of the caves in the mining area.

“Father Tony ran night schools for the children in Barkagaon Valley adjacent to Hazaribagh, and the information was shared with him by a traveller. He shared the information with me, and we decided to visit the site. I realised that those markings were ancient rock art and knew we had discovered something significant,” he says.

Bulu then confirmed its heritage value with the help of archaeologists. “It was the first Mesolithic art at Isco. Later on, we discovered more than a dozen such prehistoric rock art sites in Karanpura valley, which were at least 5,000 years old,” he says.

The discovery led to further exploration and finding paleo archaeology sites with treasures of Mesolithic rock art, Jainism, Buddhism, Brahminism sites and ancient megaliths. “All the sites came to be acknowledged by Archaeological Survey of India (ASI) adding to the cultural heritage of the region,” Bulu says, adding he also found tools presumed to have been used to make those rock arts.

“Over time, my efforts yielded results and led to the halting of coal mining in the region by the World Bank,” he says.

Alongside, Bulu found striking similarities between the prehistoric art paintings he had discovered with the murals pursued by Adivasi women in the region. “The tribal women painted the mud walls of their houses. The painting is done twice a year during harvest and marriage time inside and outside the structure. The painting style is known as Khovar and Sohrai art form,” he says.

Bulu dived deeper into it and learned that the paintings were in existence from the Chalcolithic and Iron Age eras. “They were not new, and hence it was important for the art to be protected that otherwise faced extinction. It needed to be kept alive and made visible to the world,” he says.

In 1993, Bulu established the Sanskriti Museum and Art Gallery in his house. “We were four families living in a house of 20 rooms, spread across 3-acre land. I carved a portion of the house to build the museum,” he says.

The same year, Bulu also formed Tribal Women Artist Cooperative (TWAC) and roped in 30 women to encourage the tribal women to continue painting professionally. Today, Bulu’s initiative has empowered over 6,000 women enabling their art to be exhibited at 80 international and 25 national events.

“The women present artwork on canvas, cloth and other mediums. Their artwork has now made a global mark,” he says.

Forty-two-year-old Putli Ganju, working with Bulu for years, says, “Earlier our art form remained confined to the walls of our houses in the remote part of the country. But Bulu sir has helped us seek recognition of indigenous art at international forums. What aboriginal art is to Australia, Sorahi art is for India. Today, our art forms have a significant presence in Western countries,” she says.

Putli says TWAC has enabled the tribal community to take pride in their talent and work. Currently, about 60 students are learning Sohrai art from the tribals, thus keeping the tradition alive.

A Lifetime of Service

Bulu’s sons Gustav and Justin have also dedicated their lives to continuing their father’s legacy in protecting their heritage.

“Gustav is a postgraduate in Museum Studies, University of East Anglia (UEA), Norwich and worked at the Cambridge museum for some time. He is now the curator of our Sanskriti Museum. Justin established Virasat Trust in 2012 that empowers women through various projects,” he says.

Despite facing financial crunches, Bulu never sought external help to fund his cause. “I do not believe in working with the government because of the red-tapism and protocols,” he says, adding, “I have mostly raised voices against the government too. It is in the past five years that I have stopped activism.”

His contribution to the humanitarian cause earned him the International Peace Award, Gandhi Shanti Puraskar by the Gandhi Foundation in London, 2011, followed by the Padma Shri in 2019.

But Bulu remains sceptical as to how long heritage art can sustain. He still manages a positive spin on the situation, saying, “I do not worry much about it as heritage vanishes for many reasons. Sometimes it is developmental reasons or a disconnect with the cultural association or changing social and cultural dynamics. Recent decades have seen many heritage structures destroyed or submerged under dam projects. But that does not mean that it never happened or existed. We must contribute our bit and find ways to preserve it,” he says.