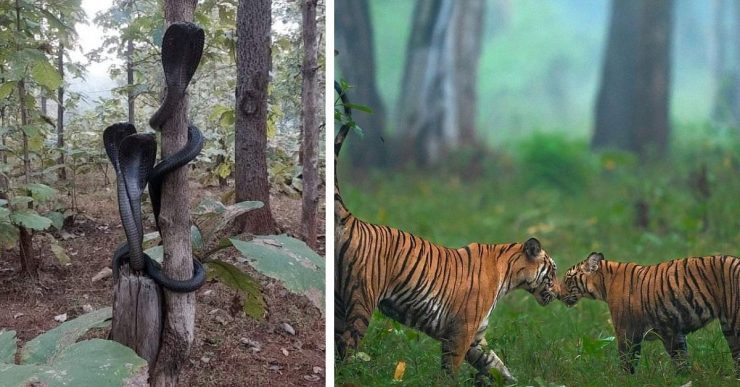 When you are in the heart of the wild, you feel the surge of adrenaline, and can hear every heartbeat. That’s the effect that nature has on you. Everyone has an adventurer within themselves, and in the wilderness they awaken.

India is home to many such spots which will give you a sense of thrill. Whether it is being in close proximity to a panther or sighting wild boar, these jungle treks and forests are made for risk takers.

Home to Asiatic lions, the forest boasts of being the last abode of the regal predator. The Asiatic lion is an endangered species and the Gir Forest’s ridges and plateaus and valleys serve as the perfect home for these beasts. Along with a fascinating bird population, you will also spot leopards, langurs, jackals, civets and many more creatures.

As you start ascending the foothills of the Valparai hill station in Tamil Nadu, you will notice the area around immediately turn denser with thick foliage and clustered plantations of the Western Ghats. The Anamalai Tiger Reserve at Valparai is a tropical jungle of sorts.

The entire area is a space for tigers, as to the east of the Anamalai Reserve, there is the Parambikulam Tiger Reserve and the Chinnar Wildlife Sanctuary and Eravikulam National Park on the South-Western side. While you are here, you will be able to spot several species of fauna such as the Asiatic elephant, mouse deer, lion-tailed macaque.

Maharashtra’s Melghat is an eco-tourism spot, abounding in natural flora and fauna. The Harisal Forest is one such spot, as is the Melghat Tiger Reserve. This wildlife sanctuary is rich in the population of the felines, bears, deer, etc. One visitor wrote on Tripadvisor, “Truly beautiful jungle. Very rich in flora. Night safaris generally result in sure success and hence are recommended.”

The river Kabini is significant for the kind of rich flora and fauna it exhibits. There are numerous jungle treks and safaris that you can be a part of when you are here. Places you can visit for wildlife sightings include the Nagarhole National Park, Elephant Safari, Kabini Dam, etc. An exquisite adventure awaits.

The name is attributed to the river Pench that runs through the forest and cuts a path. The National Park falls under the Pench Tiger Reserve, and once you are in the thick of the jungle, you will be surrounded by teak trees, dense undergrowth and a distinct silence when the big cats make their way through the forest.

Make way for the Royal Bengal Tiger while you are at the Sundarban National Park. Along with spotting the tiger, you will also see endangered species such as the estuarine crocodile and Ganges River dolphin. The Sundarban Mangrove Forests are one of the largest in the world and immersing yourself in the sights around is a truly unique experience.

Wildlife enthusiasts will have a field day at the Tipeshwar Wildlife Sanctuary. The forest is not only acclaimed for its wilderness but also for its history. A century ago there was an outburst of lava and the basalt which formed as the basis for the formation of this sanctuary. Also known as the ‘Green Oasis of Eastern Maharashtra’, the sanctuary is abundant in sandalwood trees, tigers, and boasts of a human-wildlife coexistence due to the surrounding villages.