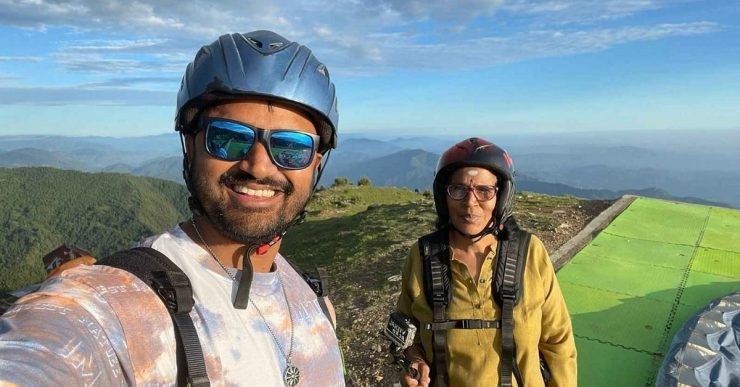 As 63-year-old Subha Surianarayanan and I connect over a call, I can hear a heavy downpour in the background, and the call keeps reconnecting.

This bad network, she says as she apologises, is because she is currently in Beed, on yet another trip with her son Venkatesh. The two have been travel buddies since 2015, and have traversed a majority of India together.

It all started when Venkatesh found that often, he was unable to plan trips because someone or the other had work commitments. That’s when an idea dawned on him — his mum was free and she could be his travel companion.

Speaking to The Better India, he recounts her reaction to being asked to come along with him on his travels. “Apne dosto ke saath jao na. Mein kya hi karungi aake?” (Go with your friends. What will I come and do?). But Venkatesh convinced her to at least give it a try.

“I told her it is never too late to start something, and so she agreed,” he says.

And has it been a fun time?

“Most definitely,” says Venkatesh, adding that often, it is because of him, and not his mother that they have to slow down.

One such instance was when they visited Ladakh in 2021. “Many people experience AMS (acute mountain sickness) due to the high altitudes. I was initially worried that my mother would too, so I had planned for the first day to be kept free to acclimatise. But ironically, I was the one who experienced AMS, while she was fine.”

To this, Subha says the secret to going head-on with these experiences is to walk 45 minutes a day and eat according to your age. “This allows me to take part in any adventure that comes my way.”

The Ladakh trip was planned as a birthday surprise for Subha, and both agree that it was truly a memorable experience. “We cut the birthday cake on Pangong Lake. However, in this remote area, one would hardly find a birthday cake shop,” says Venkatesh, adding that they adjusted with plum tea cake and a debit card that doubled as a knife.

Along with these treasured moments, there are also ones of high adrenaline. For instance, in Goa last year, Subha tried out parasailing and then ziplining in Gulmarg. She loved it, but like every other person this age, had her reservations about trying out new things. “With my son’s encouragement, I dive into them,” she says.

However, there is always a certain amount of risk involved, whether it’s travelling long distances by driving to remote locations or partaking in adventure activities. In Venkatesh’s words, “People cheer when they see us on social media, and watch our reels, and urge us on with their comments about how impressive this is. But I know that one wrong step and they will question why I chose to risk taking my mother on such journeys.”

Another challenge is travelling by car on rocky terrain. As most of their trips are done in this manner, the weather and the road can sometimes be daunting.

Recalling his Dalhousie trip in 2016, he says, “I had just begun driving and while going to our hotel I missed a turn and ended up on a one-way road. It was getting dark and we reached a dead end on a cliff.”

While people would think his mother to be the one to panic, he says she was the epitome of calm and composed, until they managed to navigate their way onto the road again.

Happiness on a budget

The duo focus on budget trips that are around Rs 5,000 to Rs 7,000 for three to four days, excluding fuel. They believe in spending more on adventure activities and sightseeing than on their stay.

In a world where senior citizens are expected to take a back seat and put their feet up, Subha is challenging these norms.

At the age of 63, she has tried more adventure activities than most youngsters. To add to this, she is not deterred by high altitudes or long treks. She does it all. But her son worries.

“I often ask her if she is doing okay while we are on a trek. She stops in her tracks and laughs, “Mein toh theek hu, tu apna bata de. (I am okay. Are you?)”

Up until now, the duo has made their way through India and have a dream to journey by car from Delhi to Kanyakumari, and explore the South and its heritage. “Another dream that we plan on accomplishing this year is to travel to Dubai,” says Venkatesh, adding that he wants his mother to experience the beauty of foreign lands.

As for Subha, she is ready to take on all of it.

“Age is just a number,” she says. “It’s all about one’s willingness to travel and explore. I’m happy that my son takes me on these adventures and makes me experience all these thrills even at this age. I’m just being me and doing what I love, which is travelling.”

To all the senior citizens out there who feel unsure of whether they can make this possible, Subha has a word of advice. “You are more than what you think. Confidence comes from within. Even I wasn’t confident in the beginning.”

“Take the leap of faith and things will turn out well for you!” she says excusing herself from the conversation, as she’s all set to go paragliding in Beed.