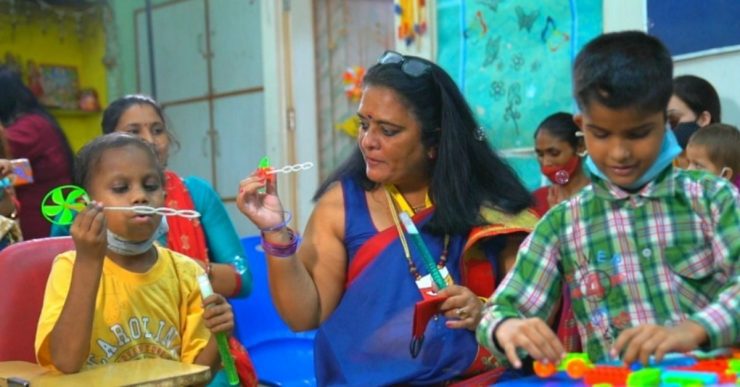 Take A Cause, Make It Yours.

This was the theme of a riveting Ted Talk that Poonam Bagai gave around two years ago. It asked the audience to find a cause that drove them and make it their own.

But in her case, she notes, it was the cause that picked her.

At the age of 38, she received a life-changing diagnosis, colon cancer, that upturned life as she knew it. At the time, she was settled in Warsaw, Poland, with her husband and children, enjoying what she calls a typical expat life, and her career as a civil servant.

Being away from the comforts of her homeland and tussling with language barriers in a foreign country only made things harder. “It was as though everything changed in one moment,” she tells The Better India.

Three surgeries, nine rounds of chemotherapy, and a traumatising colostomy — the year of her diagnosis was a whirlwind. But worse than that, she says, was the feeling of depression and hopelessness that took over.

All through her treatment and recovery, Poonam found herself shifting between two states of mind. One was the undying faith that she would make it through. The other was the nagging feeling that she would die and leave her children motherless. Alongside was the sinking realisation that while privilege and a good education were on her side, she had done nothing to show for it yet.

Eighteen years since she has lived her promise every day. Since 2004, her organisation CanKids…KidsCan has provided direct medical and emotional care to 60,000 children living with cancer. She founded the organisation with Sonal Sharma, whose daughter was diagnosed with cancer at the age of two.

Now 60, Poonam is a survivor, patient advocate, and philanthropist. She emphasises that she remains happy no matter what life throws her way. A single mother of two boys, she finds the help she needs in a robust support system that she has created for herself over the years. Alongside is her faith in divine intervention, which kept her going through her divorce as well. “Meeting Sonal was also destiny. Together, we built and grew this organisation to what it is today,” she says.

A mother’s fight against cancer

By 2008, they had started branching out to other states. “Today, we work in 122 hospitals across India, providing support for the treatment of childhood cancer,” Poonam says. “We try to fill in the barriers of access to care, and provide social support services and required manpower — social workers, patient navigators, psychologists, teachers, dieticians, dedicated nurses, and so on. We work in tandem with the hospitals to figure out what these children need.”

“Our psychologists provide support to children and parents alike. The teachers ensure the children can keep learning during their treatment. We run the CanShala school in Mumbai for children living with cancer, and plan to start these in other parts of the country as well,” she adds.

The other model on which the organisation works is parent support. The CanKids Path Pradarshak Parivarik Sahayak Group (P3SG) has been formed by parents and family members of children battling cancer, to encourage sharing experiences and forming robust support systems. Regular members are trained to become patient navigators, while periodic members may come in during special occasions.

“We encourage bereaved parents and parents of survivors to come back to work for us, where they’re provided remuneration and rewards for their work. We teach them skills in terms of patient navigation and advocacy. Our parent support group has over 1,500 members across the country,” she says.

“We also run KidsCan Konnect, which is a peer support group for survivors above the age of 13. We have ten chapters across India, and each chapter head is a survivor. We give them internships, jobs, and whatever else they need,” she notes.
She adds that CanKids also partners with state governments to provide adequate care. “One side of our programme included children who were coming to the hospital. But we also needed to ensure that families reach hospitals as well.”

A report by The Indian Express states that only an estimated 15-45 per cent of children are cured of cancer in India. This rate is as high as 80 per cent in high-income countries.

“[A] major problem lies in the access to proper diagnosis and treatment facilities,” Dr Sarita Rani Jaiswal, consultant, department of bone marrow transplantation and haematology, Dharamshila Narayana Superspeciality Hospital, told The Indian Express. “There is a huge discrepancy in detection as well as treatment. At least in all childhood blood cancers, the cure rate is more than 80-90 per cent in developed countries. Whereas in India, the treatment, despite being curable, is not affordable for the majority of children. Very few patients take the entire treatment, and this is the major reason for the lower cure rate.”

“As per our research, around 60-65 per cent of children don’t make it to hospitals for treatment,” Poonam explains. “For this, we’re in the process of signing MoUs with state governments as their knowledge and technical partners for childhood cancer. We just signed our fifth MoU with the Gujarat government. We have them with Tamil Nadu, West Bengal, Maharashtra and Punjab.”

She adds, “We’ve mapped out the whole country to cover 94 per cent incidence of childhood cancer through 15 projects. We want to focus on making sure there is higher access to care. In 2018, WHO launched a global initiative to tackle childhood cancer. They have asked low-income member countries to aim for 60 per cent survival by 2030. So CanKids is committed to getting 50 per cent access to care by 2025. By 2030, we want to get to 100 per cent.”

This year, they are participating in the Close the Care Gap campaign, spearheaded by the Union for International Cancer Control. “We’ve modified it to say Faasle Khatam Karo,” she says. “Our children have been engaged in this programme to talk about what their faasle are.”

“As of now, we need more hospitals that cater to children living with cancer. We need to strengthen the manpower to include more doctors and dedicated nurses, which will improve the quality of care. Accessibility and affordability of medical care are also needed. Even with state government schemes, challenges remain in closing these gaps and finding the support we need to provide care to cancer victims,” she opines.

Poonam says that every year, CanKids engages with around 20,000 children living with cancer. “We try to ensure that we provide patient-centric healthcare. So we rope in all stakeholders, parents and children alike, to involve them in their healthcare. We follow a rights-based approach, to highlight the voices of survivors and parents.”

A woman to look up to

“I met Ms Bagai in 2004, just after finishing my treatment. At the time, she was volunteering with the Indian Cancer Society,” recalls Ritu Bhalla, a resident of Delhi, who at the age of 11 found herself living with two different cancers — the previous one being diagnosed at the age of four.

“The main challenge during my treatment was continuing my education. The cancer had changed my whole personality. I had lost my hair, my eyelashes. Going back to school was a herculean task. We were struggling financially, and my health had taken a massive toll,” she notes. “CanKids helped me carry on my education, and a lot of emotional support, which I required at the time.”

Ritu was also very fond of art, and her talents flourished under CanKids’ care. The organisation helped her publish a book as well, she says. “Poonam ma’am’s influence on me has been tremendous. Her own story is so eye-opening, and she was my role model. She went through hell and back, and she used all of that to help children living with cancer.”

Poonam, says Ritu, offered her support every step of the way, whether it was education or training in life skills. “She also taught me how to nurture relationships and remain focussed. She assured me that I could achieve whatever I dreamt of,” Ritu notes. “I have been volunteering with CanKids for years, especially in the survivor support group. My leadership abilities come from her.”

“Sometimes, people call me choti Poonam Bagai,” she laughs. “Her existence has meant the world to all of us, and I love her very much.”

Poonam says, “I had so much support from our family and friends. Everyone was willing to put their life on hold for me. This is what I want to give these children.”

The single mother also emphasises that she wants to raise her boys to respect her as not just a mother, but also a woman. “I want my children to know me as a woman who is productive, who is giving back to society, and someone who plays a role beyond motherhood,” she says.

“In their school essays, they would write about how I was the person they admire the most in the world,” she smiles. “On days where I am despondent or close to giving up, they step up to remind me that there are thousands of children out there who need CanKids. That keeps me going.”

Poonam has spent many years working with the Indian Cancer Society and is also the current vice-chairman of Pallium India. In 2021, she was awarded for being a Woman Leader In Social Impact, and running a woman-led organisation wherein women make up for 64 per cent of the employees. She has also been the recipient of the Nargis Dutt Cancer Conqueror Award, the Indira Gandhi Priyadarshini Award, and the Karmaveer Maharatna.

All through life’s hardships, Poonam has made her happiness her priority. “At one point in time, I decided to always take the high road. Happy moments come from the things that are important to me — my parents, my children, my friends, and the work that I do.”

Over the years, she has also watched the women she has worked with transform into independent and assertive people. “I have watched women find their inner voices, and earn respect as individual members of society. I feel so proud when I see that empowerment happen,” she says.