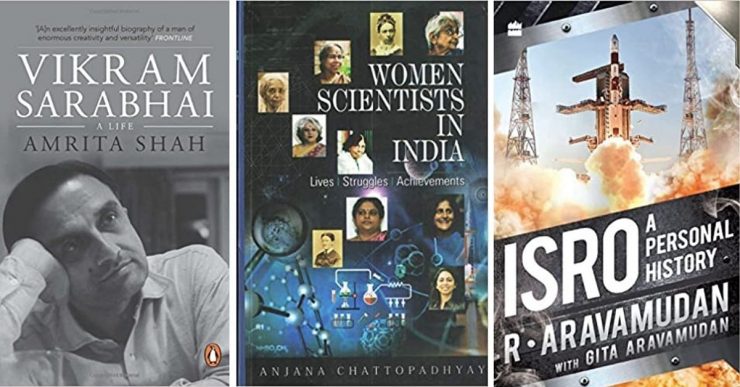 Immaterial of whether you enjoy science or not – reading about the struggles, challenges and victories that some of India’s celebrated scientists have undergone is quite exhilarating. From Nobel Laureate C V Raman to Homi Baba—also known as the father of the Indian nuclear programme—we bring to you six book recommendations on Indian scientists.

Written by Uma Parameswaran this book traces the life and work of Nobel laureate C V Raman. He was incidentally the first non-white and the first Asian to receive a Nobel Prize in the sciences in 1930. He also became the first Indian director of the Indian Institute of Science in Bengaluru.

In this well-researched, comprehensive volume, the biographer sheds light on Raman’s vision, idiosyncrasies and struggles. In an attempt to record his life, she traces the influences and events that made Raman the interesting man and scientist that he was.

The paperback version of this book has 296 pages.

He also achieved international prominence for his trailblazing studies in the field of Atomic Energy, while his role of scientist-diplomat, handled with aplomb, gained worldwide recognition in the global arena.

The paperback version of this book has 176 pages.

Written by Indian Space Research Organisation (ISRO) pioneer R Aravamudan himself, this book is a first-person account of the people who built India’s space research programme and how they did it. From details about the rocket engineers who laid the foundation to the savvy young engineers who keep Indian spaceships flying today.

It is the tale of an Indian organisation that defied international bans and embargos, worked with laughably meagre resources, evolved its own technology and grew into a major space power. This is a made-in-India story like no other.

The paperback version of the book has 256 pages.

Written by Amrita Shah this book gives the reader an insight into the renaissance man of Indian science. Known to make the impossible happen, Vikram Sarabhai is also credited with being the founder of India’s space programme (ISRO). Vikram dreamed of communication satellites that would educate people at a time when even a modest rocket programme seemed daring.

He headed the Atomic Energy Commission; set up India’s first textile research cooperative, ATIRA, the first market research organization, ORG, the Indian Institute of Management in Ahmedabad (IIM-A) and the dance academy Darpana. Besides his professional achievements, the book also gives the reader an insight into his personal life.

The paperback version of the book has 264 pages.

5. The Man Who Knew Infinity: A Life of the Genius Ramanujan

Written by Robert Kanigel in 1991, this is a biography of the Indian mathematician Srinivasa Ramanujan. The book gives a detailed account of his upbringing in India, his mathematical achievements and the mathematical collaboration with mathematician G. H. Hardy. The book also reviews the life of Hardy and the academic culture of Cambridge University during the early twentieth century.

With his rich and evocative writing, Robert takes us on a journey from the temples and slums of Madras to the courts and chapels of Cambridge University, where the devout Hindu Ramanujan, ‘the Prince of Intuition,’ tested his brilliant theories alongside the sophisticated and eccentric Hardy, ‘the Apostle of Proof’.

The paperback version of this book has 448 pages.

While there are no dedicated books to women scientists in India, this compendium by Anjana Chattopadhyay captures the work done by many of them over the years. From the story of Tessy Thoman, known as the missile woman of India to Rukhmabai, who was an Indian physician and feminist best known for being one of the first practising women doctors in colonial India. ween 1884 and 1888, this book is a treasure trove.

The story of Indian women scientists has been one of struggle. Overarching social structures, uneasy access to education, discrimination and opposition at home, study and workplace contributed mainly to the impediment of the progress of women in science. To a large extent, it is the work done by these women that have cemented the path for future generations.

The paperback version of the book has 492 pages.

This article contains affiliate links. If you purchase something using one of these links, The Better India will get a small commission.