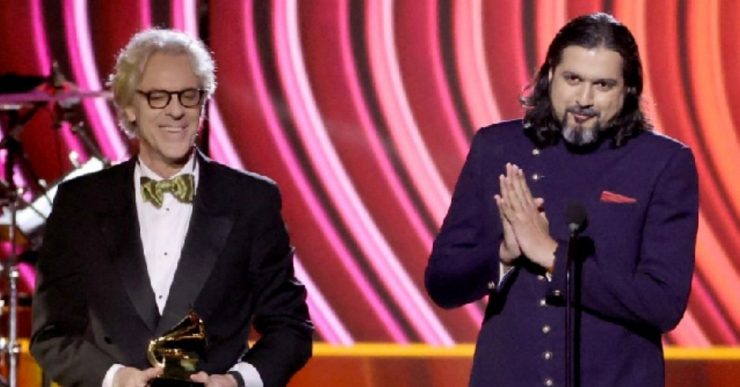 Nature has always been an important element of Ricky Kej’s compositions. The American-born Indian artist, who is also an environmentalist, chose music as his medium to communicate with the world. His latest album ‘Divine Tides’, curated in collaboration with rock legend Stewart Copeland, won a Grammy Award in the Best New Age Album category. This is Ricky’s second Grammy, after his ‘Winds of Samsara’ grabbed one under the same category in 2015.

Divine Tides features traditional artists from all over the world, whose “soundscapes and melodies meet pulsating rhythms amidst lush ambient textures, which elevate the senses into a realm of spiritual solitude, where the soul is free”.

It was Ricky who approached Stewart Copeland by assembling the amazing collection of exotic musicians to turn them into an album. The result was nine extraordinary songs — Wonders of Life, Himalayas, Our Home, Art of Devotion, Pastoral India, I am Change – 2021 Remastered, A Prayer, Gandhi and Mother Earth.

With Gandhi, unlike what we expect from the title, Ricky shows the visuals of frogs from the Western Ghats of India. “When we talk about the environment, we often do so in a way that is disconnected from humankind. We need to remember that our survival is integral to co-existence with the wild and with wildlife,” the musician told Edexlive. This is the very reason why the song was named Gandhi, who has said “The world has enough for everyone’s needs, but not everyone’s greed”.

Ricky, who has performed at venues in over 30 countries including the United Nations headquarters in New York and Geneva, is also a well-known eco-activist. He was selected as the ambassador at UNCCD COP 14 (Conference of the Parties to the UN Convention to Combat Desertification) to raise awareness about land degradation, desertification and drought.

“…I consider every award a platform, and important for an artist’s career. But if awards are used just for vanity, it’s pointless. Using awards and their platforms for the greater good is what matters to me. Winning the Grammy Award was a major catalyst in taking forward the causes that I strongly believe in, like climate action, children’s rights, refugee rights, etc,” Ricky said in an interview after receiving his first Grammy Award.

After the announcement of awards, Ricky greeted the audience of the 64th Grammy Awards at Las Vegas’ MGM Grand Marquee Ballroom with a namaste. He shared the stage with his fellow composer Stewart Copeland and later wrote an Instagram post, “So grateful to have won the Grammy Award for our album Divine Tides. Absolutely love this living-legend standing next to me — Stewart Copeland. Love all of you too! This is my 2nd Grammy Award and Stewart’s 6th.”

Here are some lesser-known facts about this artist:

Ricky says he has always loved the musical styles of Nusrat Fateh Ali Khan and Pandit Ravi Shankar, who did not let genre boundaries define them. “All they did was make music that they strongly believed in, and collaborated with some of the best musicians and individuals across the globe. They never lost their artistic personas,” he told Rolling Stone.

Ricky was born in North Carolina as the son of a Punjabi and a Marwari. The family shifted to Bengaluru when he was eight years old. After schooling, he joined a dentistry course at the Oxford Dental College in the city. Even though Ricky completed the course, he didn’t pursue a career in it and instead, took up music.

Ricky was a keyboardist of a Bengaluru-based rock band called Angel Dust. Two years later, he set up own studio and got into composing. This self-taught musician created music for over 3,000 ad jingles and Kannada films. His favourite genres are Hindustani classical music and carnatic music. After the age of 24, he started studying classical music.

Ricky has also been an advocate for anti-piracy laws in India. In an interview with the Hindustan Times, he said, “In India, there is a culture of piracy; no one wants to buy music. And I blame Bollywood for that. All they care about is their film and nothing about the artist who has composed the music for it. They don’t care about his revenue. No one will buy my CD, so I will sell my album in the US, not in India.” Ricky also said that he wants the PM to take interest in the Indian music industry.

Shanti Samsara or World Music for Environmental Consciousness was one of his albums which was brought out in 2015. At the United Nations Climate Change Conference, Prime Minister Narendra Modi and then French president Francois Hollande jointly launched this album. Prior to its launch, Ricky travelled and spoke about conservation and environment. During his visit to the Republic of Kiribati, he interviewed and created music with three-term ex-president Anote Tong.

Additionally, Ricky is the composer of the music for 2011 Cricket World Cup opening ceremony, held at Dhakka on 17 February 2011.

To make children aware of the Sustainable Development Goals (SDGs), he created My Earth Songs, a collection of 27 children’s rhymes based on the 17 SDGs. These songs were launched by UNICEF and are published in over five million textbooks in multiple languages.

”I have always believed that we only protect what we love and that is what I hope to achieve by showcasing the magnificence of our natural world through my music,” Kej said in an interview with Rolling Stone India.