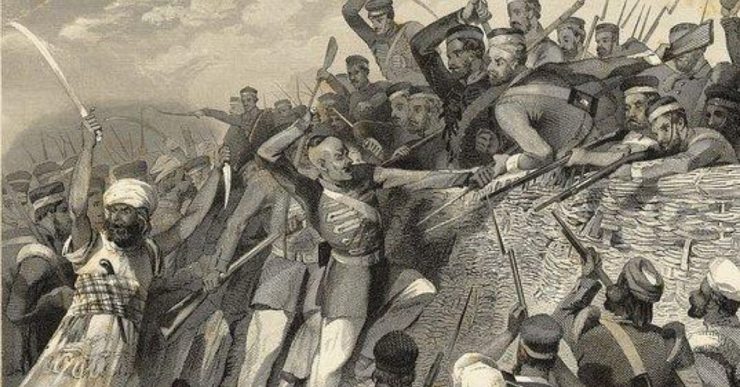 In October 2017, the state of Odisha put forth a demand before the Centre to recognise a 200-year-old rebellion as the First War of Independence, as opposed to the Revolt of 1857. This was the Paika Birodh, or the rebellion of the Paikas, against the British almost 40 years before the Revolt of 1817.

Centuries later, this uprising has failed to gain nationwide recognition, and many members of the Paika community have taken to the streets to protest the Centre’s denial to grant the war the status of being India’s “first war of independence”. Regardless, the Paika Birodh is a significant chapter in both Odisha as well as the country’s history, especially as India marks Odisha Day on April 1.

Amid ruin and ruthlessness

Since the 16th century, the Paikas (foot soldiers), a class of military retainers, had been recruited by the kings of Odisha to provide martial services in return for hereditary rent-free land and titles. During times of peace, they would mainly take up cultivation.

As the British government began gaining control over the nation, it brought with it new land-related legislation, due to which many communities, including the Paikas, lost their estates.

Chandi Prasad Nanda, a professor of history at Ravenshaw University, Cuttack, said, “Colonialism formally entered Orissa in September 1803. Colonel Harcourt marched virtually unchallenged from Madras to Puri and faced only feeble Maratha opposition onward to Cuttack. The following year, the British razed Khurda’s Barunei Fort by cannon, arrested the king…and banished him to Puri. Over the next several years, as the British went about introducing new revenue settlements….several original Oriya proprietors faced ruin, and the land was transferred to ruthless Bengali absentee landlords, often for a pittance.”

Meanwhile, author PK Patnaik wrote, “With the ruin of the Oriya…aristocracy came the ruin of the ryots [a colonial-era term for peasant farmers]. This was a class of people whose welfare was indissolubly linked with their landlords.”

Economic and social tensions were rife in the land, with the East India Company shutting down major ports to protect its own monopolies. This, coupled with the implementation of salt taxes and subsequent price rises, was affecting land renters and owners alike. A new currency policy abolished the system of the cowrie, and instead dictated that all taxes would be paid in silver.

In the face of these upheavals, the Paika rebellion began brewing in the city of Khurda, under the leadership of Bakshi Jagabandhu.

Striking down symbols of power

Jagabandhu Bidyadhara Mohapatra Bhramarbara Raya had inherited the title of ‘Bakshi’ from his ancestors, who were commanders of forces of the King of Khurda. His family, like other Paikas, was provided land grants and other such requisites. However, their estate of Killa Rorang was taken over by the East India Company, pushing him to such devastating poverty that he survived for two years solely based on begging and donations. He began mobilising Paikas and in March 1817, hundreds came under his leadership and slowly began spreading across Odisha, with feudal chiefs, zamindars and the common folks alike joining in.

Jagabandhu was aided by Raja Mukunda Deva, the last King of Khurda, and along the way, gathered the support of many other kings and local leaders. With 400 members of the Kandha tribal community, Jagabandhu entered Khurda and attacked British symbols of power — police stations, administrative offices, and the treasury.

The Magistrate of Cuttack, E Impey, dispatched forces in an attempt to quell the disturbance, but the Paikas forced them to retreat, and Lieutenant Faris, an important military leader, was killed. In April 1817, another force was sent to Khurda, and this time, they were able to take over the rebellion, declaring martial law in the city. Regardless, the movement had now spread to Puri and other parts of Odisha, and many southern portions of the state fell under rebel rule.

Several such encounters would take place over the next few months, where both the rebels as well as British forces suffered heavy losses. By May, however, the East India Company managed to regain some control over the entire province. Meanwhile, Jagabandhu fled to the jungle. For long, even as peace began returning to the Khurda region, his capture remained a matter of anxiety for the British. After a long tussle between the two parties, he was finally captured in 1825 and died in captivity in 1829.

An attempt to mainstream

After the uprising was quelled, the East India Company set up a commission to look into why it had grown into such a strong movement. It ruled that “Now, there is no need of assistance of Paikas at Khurda. It is dangerous to keep them in the Presidency armies….In order to break their poisonous teeth, the colonial Police Force must be highly alert to keep the Paikas under their control for a pretty long period, unless the Paika community is ruined completely Company rule cannot run smoothly.” Revenue policies remained unchanged and were a major source of discontent for the people of Odisha.

Today, children of the Paika community grow up hearing stories of the bravery and valour of their ancestors, but the rebellion still exists on the fringes when we discuss India’s freedom struggle movement.

the flame of revolution is still burning in the hearts of the successors of their valiant forefathers.
The Paikas are now struggling hard to keep up the old military tradition through Paika Akhadas.
3/n pic.twitter.com/EuLxFBsbb0

In 2019, President Ram Nath Kovind laid the foundation for a Paika memorial on a 10-acre plot in Barunei Hills. Culture Minister Ashok Chandra Panda said that the revolt played the role of a “torchbearer” and “catalyst” in shaping India’s future freedom movement. “It was truly a pluralistic people’s movement which transcended the boundaries of caste, creed and class,” he added.