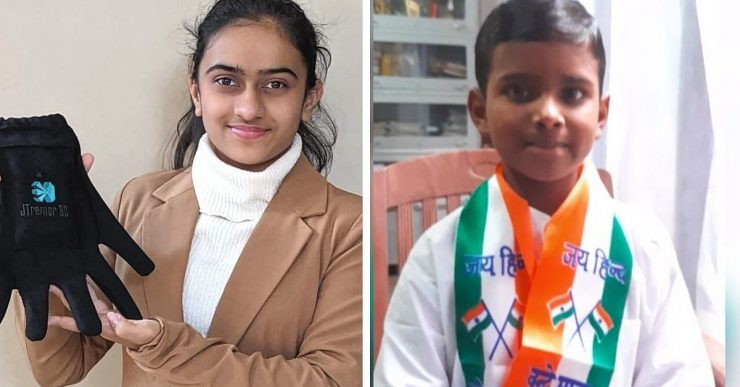 The Union Ministry of Women and Child Development has announced the Pradhan Mantri Rashtriya Bal Puraskar awardees for the year 2022.

A total of 29 children were honoured with the award which included 15 boys and 14 girls from 21 states and union territories. The children awarded fell under various categories; which included — Innovation, Social Service, Scholastic, Sports, Art & Culture and Bravery.

The award also carries a cash prize worth Rs 1 lakh, which was transferred online to the respective winners’ accounts.

Here’s the list of children being awarded and a summary of their achievements.

Shivam Rawat has done extensive research on the Indian mustard plant using bioinformatics with a focus on increasing crop productivity. He has also been the recipient of several other state awards and is currently working on other such projects to increase crop productivity.

Vishalini N C is among the youngest patent holders of India. At the age of six, she applied for a patent and got approval for the same. She has invented ‘An Automatic Multi-Functional Life Rescue Flood House’ that can help prevent drowning during floods. Her invention, a floating house contraption, can be used to save the lives of vulnerable sections of people such as children, pregnant women, aged and the physically challenged, pets and important objects during floods. The floating house, with a zippered top, has provisions to keep an oxygen cylinder, a bag of food, water and a first aid kit.

Jui Abhijit Keskar has invented a wearable tremor profiling device called JTremor3D and has also come up with JTremor Index. In a bid to help her uncle, who is battling Parkinson’s disease, Jui Keskar from Pune has developed the JTremor-3D device, which helps measure tremors in patients and sends the data to the doctors through a Cloud database. This in turn helps the latter prescribe adequate medication. She has won accolades for this endeavour, including the Broadcom-IRIS Grand Award 2020-21 from the Central government.

You can read more about her here.

Puhabi Chakraborti wears several hats. She is an AI app developer, patent holder, kickboxer and a black belt from the State of Tripura. She has developed an AI-based application — ‘AthleteX: For the Atma Nirbhar Athlete’. This app makes athletes perform better physically and mentally by detecting injury in scans to accurately detect injuries and performs metal health scanning using deep learning, AI, Artificial-Neural-Networks, and other Machine learning tools. Her project was one of the top 20 winners of the Intel AI for youth program for the year 2021.

Aswatha Biju’s fascination with fossils began at the age of five she was gifted an encyclopaedia. What attracted her most was an image of an ammonite fossil. Today, she is a budding palaeontologist who has been collecting various fossil specimens of vertebrates, invertebrates, microfossils, etc. She is also working towards generating awareness about this field.

To read more about her fascinating journey, you can click here.

Banita Dash is a budding astrophysicist who has a keen interest in asteroids. Having designed an automated sanitizing school bag, Banita is also the recipient of several global awards. She has been conferred with the title of Citizen Scientist by NASA and IASC. She also has a keen interest in Pattachitra, the local art form from Odisha.

Tanish Sethi is a young app developer from Sira in Haryana. He has developed a unique e-commerce initiative called ‘Pashu Mall’, which connects buyers and sellers of cattle via an online platform. This app is currently in use in the states of Haryana and Punjab.

Medhansh is a young app developer who has worked on developing a web portal dedicated to providing all information on COVID-19. He also participated in a state-level corona prevention project named Mission Fateh, which was launched by former Chief Minister Capt. Amarinder Singh developed the entire IT portal along with various awareness videos as per the guidelines issued by the Punjab Government. For this work, he was also given an appreciation certificate by the Punjab Government.

Abhinav Kumar Choudhary is a young entrepreneur who helped 10,000 underprivileged children by arranging second-hand books through a website during the COVID-19 imposed lockdown. His initiative has also helped in environmental conservation. He has also developed a machine to promote the use of sanitary napkins and for their eco-friendly disposal, to prevent the spread the various diseases.

Pal Sakshi at the age of eight has contributed immensely towards the PM CARES fund. He raised funds by conducting an online musical charity show. Besides this, he also developed an app for creating awareness about COVID-19 and also listed the various precautionary measures one can undertake to stay safe. He is also a volunteer under the Swachh Bharat Mission.

Aakarsh Kaushal, a resident of Karnal in Punjab developed a website to help residents and officials to keep a tab on the surge and fall in the cases. Moved by the plight of people during the second wave of COVID-19, Aakarsh created a portal to facilitate them and later created another portal for the availability of beds in the hospitals of the district.

Arushi Kotwal is the only chess player from the Union Territory of Jammu & Kashmir who has managed to bag medals in all three formats of Chess (Classical, Rapid and Blitz). She is also the only titled player of Jammu & Kashmir to have the Woman Candidate Master (WCM) title and aspires to become a Grand Master.

Telukunta Virat Chandra is a young mountaineer to summit Mount Kilimanjaro, the highest peak of the African continent in 2021. He has also got a mention in the Asia Book of Records & India Book of Records for his herculean achievement.

Chandhary Singh Choudhary is a young roller skater who has won several medals. He is also a record holder with a 96 hour-skating record. He is one of the finest young roller skaters in the country. Besides skating, he is also good at swimming, taekwondo, and shooting. Chandhary’s father, Tejendra Choudhary, works as a hawker at a gas agency and while he does not earn much, he still ensured that he got his son enrolled in a skating academy.

Jiya Rai born is a person with a disability who achieved India’s top ranking in open water para-swimming. She also found a mention in the Asia Book of Record for her achievement. She set a record when she swam 36 km in 8 hours and 40 minutes when she embarked from the Bandra-Worli Sea Link and completed her swim at the Gateway of India.

Swayam was diagnosed with Down’s syndrome and has been honoured for swimming the 14-kilometre distance from Elephant Caves to Gateway of India in four hours and nine minutes. Swayam has also made a mark in the Limca Book of Records 2017, National Award 2018 for the Empowerment of Persons With Disabilities, Wonder Book of International Record 2018, District Award 2020 and World Record India awards earlier.

Tarushi Gaur is a Guinness World record holder in taekwondo martial arts. She has also won 151 gold, 40 silver and 34 bronze medals in the sport. She aspires to represent India at the Olympics and win a gold medal for the country. She is also inspired by Mary Kom. Tarushi is also the youngest girl to win degree one and degree two black belt in taekwondo in India.

Anvi Vijay Zanzarukia is also referred to as the ‘rubber-girl’ of Surat. She has lived with three health challenges since birth — congenital heart defect for which she has undergone open-heart surgery, TRISOMY 21 with 75 per cent intellectual disability and Hirschsprung’s disease, a condition that affects the large intestine (colon) and causes problems with passing stool.
Despite this, she has been learning yoga for the last three years and has won gold medals in various state and national-level championships in yoga. She has won three gold medals and two bronze medals in national-level yoga competitions in the last three years. She has participated in a total of over 42 yoga competitions in which she has won 51 medals.

Gurugu Himapriya displayed exemplary courage when she saved her mother and two younger siblings from a terrorist attack in 2018 in Jammu & Kashmir. At that time, Himapriya was just eight years old. Terrorists from Jaish-e-Mohammed struck at an Army residential quarters at Sunjuwan in Jammu. Himapriya managed to prevent a terrorist from entering the bedroom for three hours before falling unconscious after being injured in a grenade explosion. Himapriya’s timely and brave act not only helped in preventing casualty escalation but also helped the Army in nabbing the separatists.

Shivangi Kale has shown her fearlessness at a tender age. With her presence of mind, she saved the lives of her sister and mother from electrocution.

In a report published by The Indian Express, Shivangi’s mother, Gulbakshi, said, “I could see my younger daughter running towards me but I could not even ask her to stop because I could not speak. Just then, Shivangi held Ishanvi by her hand and pulled her back. I saw her taking charge of the situation when she instructed her sister to not go near me. I saw her eyes tracing my hand to the switchboard, which was at around 5 feet height. She brought a stool to stand on and switched off the appliance. The effect of electrocution wore off and I stopped shaking physically. But I was in a state of shock and I sat speechless on the sofa. Shivangi patted me on my back and asked me if I was okay.”

Dhiraj Kumar has displayed his courageous act of bravery by saving his younger brother who was caught by an alligator in the river Gandak, Bihar. Dhiraj dived into the river, took on the alligator and saved his brother. Both Dhiraj and his brother suffered injuries for which they were treated at the local government hospital.

Gauri Maheshwari has mastered more than 100 styles of calligraphy and has registered her name in many Book of Records as one of the youngest calligraphers. Not just a great calligrapher, Gauri has also taught over 700 students this art. The money that she earns from these classes is used for various social causes, which includes army welfare and helping the underprivileged.

Remona Evette Pereira is a young Bharatnatyam performer who has pursued this art form for 13 years. Besides various awards, her name finds mention in the Golden Book Of World Record – London 2017 and India Book Of Record 2017. Remona has also been learning Western dance, folk dance, and other Indian dance styles. Remona has also been a part of various theatre productions.

An accomplished Mridangam player, Deviprasad is a young Carnatic music percussionist. He has been performing at many Carnatic music concerts and has played along with many renowned musicians since a very young age. Having started learning at the age of six, Deviprasad has been practising the percussion instrument for three hours every day since then.

Syed Fateen Ahmed is a pianist par excellence and has shown the world what Indians are capable of in the fields of music and culture. He has also performed for the UNESCO World Art Day. He has won several International Piano competitions and is also one of the youngest certified Indians to score a distinction in Diploma in Music.

Daulas Lambamayum has shown his skill in the field of painting and photography and has excelled in his field. His work has received admiration at various exhibitions and competitions.

Dhritishman Chakraborty has an inborn talent for singing. At the tender age of five, he has shown a remarkable talent for singing. He can sing in five different languages – Assamese, Sanskrit, Bengali, Hindi and English. He was also conferred with the title of Youngest Multilingual Singer under the India Book of Records, 2021.

Avi Sharma is the only child to receive an award under this category.