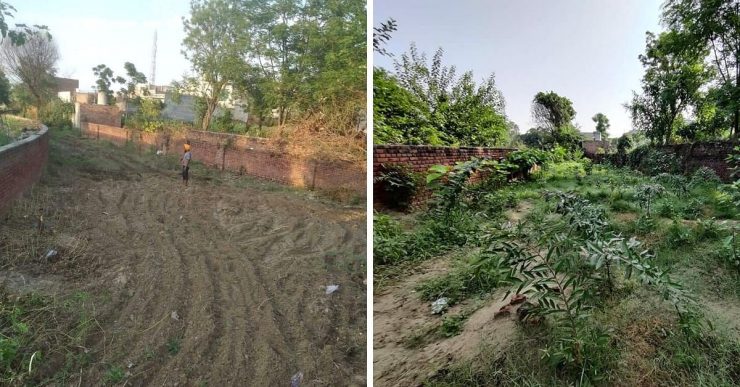 For the youth of Ghagga village in Punjab, early mornings and evening hours were spent at the playground, playing football, volleyball, cricket, and other outdoor sports. When summer vacations rolled in, they found even more time at hand to spend outdoors.

But the sweltering heat of the sun, especially late in the morning, began to take a toll on them. It was then that these youngsters took note of a lack of trees and shade in their vicinity, and the disconnect they shared from the environment at large.

This is the story of how one group set out to change that.

In The Thicket Of It

Goldie Singh, a resident of the village, says, “After completing my graduation in computer applications, I spent my free time on the playground with my friends. After a tiring day under the scorching sun, we would crave some shade and water. That was when we realised there was not even a single tree on the playground.”

“On a Sunday of summer 2017, a bunch of us decided to plant trees on the playground. We all pooled in money and purchased 25 saplings of the Alstonia plant, commonly known as the blackboard tree. The species had its presence in some parts of the village, and we knew it would grow tall and provide us with the much-needed shade,” the 21-year-old tells The Better India.

However, Goldie and his friends ran into a roadblock. “We realised that the soil was hard and did not allow the roots to find a grip deep inside the soil. I approached a friend working in the agriculture department for help. He conducted soil testing and recommended some medications and remedies to soften the soil and improve fertility. We treated the soil and used organic matter around the root area, which eased the problem,” he says.

The enthusiastic group also shelled out additional money to set up a temporary water pipeline connected to a nearby tank. “We spent a few hours every day watering and maintaining the saplings,” he adds.

Goldie says that slowly, the group decided to expand their activity in other parts of their village as well.

“We started planting trees in lanes, open areas and other public spaces, creating green zones. Our playground is also used for army recruitment training, and about 200 of them decided to join our cause seeing our activity. As the group of volunteers increased, we named our initiative Green Ghagga and created a WhatsApp and Facebook group for coordinating the activities,” he says.

As their activities increased, the group started facing financial crunches. “By late 2019, we started as a small group and expanded within a short time. Our plantation activity increased exponentially, and we did not have the means to fund our initiative,” Goldie says.

Coincidentally in 2020, the COVID-19 lockdown came into place, which introduced them to RoundGlass Foundation, an organisation working to improve the lives of children, youth, women, and helping communities.

“The foundation was delivering rations and distributing food to the migrant labourers. My elder brother, Sukhbir, was introduced to one of the members and quickly bonded. He learned more about the foundation and felt like sharing our plantation initiative with them. They appreciated our efforts and decided to support our cause which meant an end to our financial struggles,” Goldie explains.

Later, a team from the foundation visited the plantations and decided to help provide saplings and other technical guidance. “We were planting many trees but had limited knowledge about plants. We didn’t know which species were on the verge of extinction and needed to be planted immediately and we took help from the foundation. It has helped us plant 7,000 trees to create two mini-forests in our village. Our group has also established four parks in the residential areas of the village,” Goldie says.

Besides, the Green Ghagga has reached 25 villages creating 20 mini forests and 10 parks.

Dr Rajnish Kumar, heading the Plant for Punjab and Waste Management initiative at the foundation, says, “We provided technical help to the volunteers in deciding the plant species, spacing between two saplings during plantations and positioning the plants. The foundation has also helped the volunteers educate them about the amount of water required for each species and guiding in other plant maintenance aspects.”

Dr Rajnish says the foundation has provided the group with over 50 plant species, including guava, Alstonia and jamun. “We have also focused on native plant species such as babul, tecomella, jujube, reru, jand—also known as ghaf—van, black currant or phalsa and others which have disappeared or were on the verge of extinction,” he adds.

Goldie says a list of sapling requirements and other equipment such as a water tanker or tractor is prepared and shared with the foundation. “The foundation helps us with our needs. In return, we document and share detailed data about the location and status of the saplings. Our plantations have a survival rate of about 90 per cent, and we take turns maintaining them every weekend. The foundation has also provided five labourers to assist us on the ground,” he adds.

Five years on, the multiple plantations are showing results of efforts invested by the youngsters. “These mini forests are developing into dense greenery which acts as green lungs for our village. It has helped bring the local temperatures down and restore biodiversity. Birds like small sparrows, white sparrows, owls, parrots, baya weavers, butterflies and bees have become a common sight now,” Goldie says.

The youngsters’ initiative has inspired neighbouring villages that have formed local groups. “Villages such as Dugal, Brass, Dedhan, Shutran and Rogla have formed green groups taking up plantation activities in their respective villages,” he adds.

Manjeet Singh, a farmer from Dugal village who started Mission Hariyali after getting inspired by Green Ghagga, says, “We are around 45 members in our club and have created a mini forest in our village with the help of the foundation. We witnessed bird species that were not known to visit this region. A lot of Punjabis living abroad are showing appreciation and donating for our cause of bettering the environment.”

However, Goldie says that not everyone welcomed the youth club’s decision of turning the village into a green paradise. “Often, children or other miscreants in the village destroyed the plantations. Significant damages were reported with the plantations during the initial days and could have been prevented if we had funds to buy tree guards, enabling the plants to grow better. The panchayat also opposed our decision as some locals feared that the entire village would be forested and there would be no land left for development. Procuring water for plantations continues to remain a challenge. We aim to address the water security issues and other infrastructure needs in the coming months,” he says.

Goldie feels that government support for their initiative will further boost their cause.

“Despite the setbacks, we feel proud of our achievements and hope we can garner more support in coming years. We plan to create at least four mini forests each season and hope to cover entire Punjab with greenery,” he says.