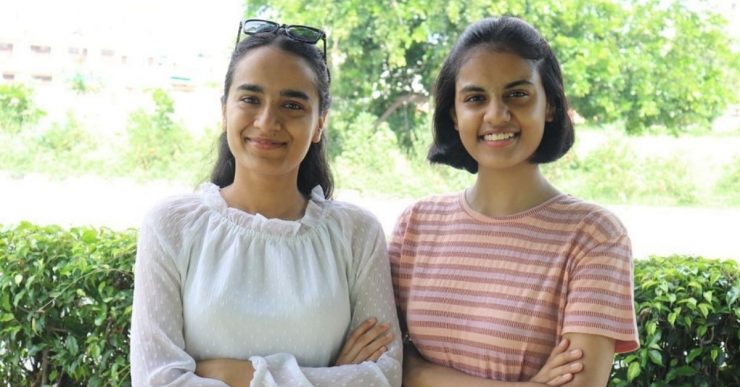 “Our relatives thought having two girls in the house would mean that my father would need to turn into a bodyguard.”

While this is the thought that most Indian homes have about the birth of a girl child, for 23-year-old Sanjoli Banerjee, an activist from Karnal, it was the start of a nightmarish ordeal.

When Sanjoli was just five years old, she witnessed her pregnant mother being pressured by relatives to get an abortion when the sex determination results indicated another baby girl was on the way. She says that while her parents had wanted to move ahead with the pregnancy, they were forced to take the test thanks to familial pressure, despite the knowledge that killing their baby solely because she was a girl would be abhorrent.

It was at the very last moment — when the nurse was ready with the injection on the operation table — that the couple decided to ignore their relatives and raise their baby girl as a lesson to all who thought girls were a burden.

At a tender age, Sanjoli was a silent witness to all of this. She watched, observed and the seeds for activism were sown within.

Since the age of five, Sanjoli has dedicated her life and work to empowering women. She does this through educating girl children with a mobile school that she runs with her sister Ananya, campaigning for issues like menstrual hygiene, speaking at rallies, etc.

She has been lauded for her work by dignitaries and ministers alike and has also received many awards, including The Diana Award in 2021 for Social Action and Humanitarian Work.

A life dedicated to activism

One of the first events that the family conducted for the cause of raising awareness about female foeticide was in 2004 at Yamuna Nagar on the occasion of Lohri. Through their event Lohri, Beti Ke Naam, they honoured parents of baby girls with cash prizes.

At this event, Sanjoli enacted the role of a female foetus while reciting a poem — ‘Hold Me, Papa! Hold Me!’— penned by her father. “Just spare me a chance to live…To come out not in fragments,” she recited as the masses gathered there found themselves emotional.

This was the moment Sanjoli found her tool of sensitising the masses — her voice of activism.
At the age of seven, she received the Bal Puraskar for Excellence at Activism by the chief minister of Haryana in 2006.

While Sanjoli was actively taking part in raising her voice for women’s empowerment, Ananya was watching her and learning too.

“Getting to know how I was not accepted, welcomed, or celebrated by society because of my gender was extremely uncomfortable,” says Ananya. “Every time I think of it, I am bothered and the pain gives me more strength to actively build a world where girls are accepted, educated and empowered.” When asked what fuelled their desire to be the voice of change, they say their parents fighting family pressure to raise two girls was their first inspiration.

For Sanjoli, the other was personal experience. “Through my activism journey, I’ve seen firsthand how it is being a woman in India. I’ve often been dismissed by men who think women don’t have the right to be educated as much as them.”

Meanwhile, Ananya says that instead of being a mere spectator, she wants to take the responsibility of change on her shoulders. “Now it is not just me and my sister, but a long chain of young changemakers impacting lives.”

This has also been possible thanks to their father’s NGO Sarthi, which he started in 1992. While it began with the intent of carrying out charity activities during his Master’s in Social Work, today, around 250 youth volunteers are a part of it. Under the umbrella of Sarthi, the sister duo diversified into other topics that need addressing. Their motive was simple — to create awareness about various issues that affect women, while not losing sight of their initial starting point, which was to stop female foeticide.

They realised female foeticide does not exist in isolation and decided to correlate this with environmental degradation. “Both women and our planet are in danger,” says Sanjoli. “The former bring humans into the world, the latter sustains them.”

In 2009, they travelled across seven states of India, covering a distance of 4,800 km, as part of their mission Save Daughters, Save Earth. During this period, they screened their documentary film ‘Earth in Flames’, conducted seminars in schools and colleges, and distributed pamphlets to highlight the message of saving the planet.

The duo has always ensured their voice for change reaches the highest platforms, and in 2015, they penned a letter to Prime Minister Narendra Modi, highlighting suggestions for curbing female foeticide.

Among the many points listed, one was a plea for compulsory sex determination. “We asked for every pregnancy to be recorded, monitored and registered by government agencies,” explains Sanjoli, adding that this is one step towards ensuring that people do not go in for unnecessary abortions of girl children.

Another of their suggestions was to start women’s police stations so that women could report crimes to female police officers.

The duo received recognition for their letter in the form of a stamped postcard from the PMO, and this inspired them to raise the voice of activism louder.

In 2018, they decided to redirect their approach and ‘adopted’ a village named Darar in Haryana, where they started campaigning.

“We wanted to target young kids in their formative years so that they then educate the community,” says Sanjoli, adding that in 2019, they started a mobile school named Sushiksha for the kids in the village.

The zero-expense weekend school has a curriculum focused on holistic education and children from all castes and backgrounds are welcomed here. The school currently has 80 students.

One of the students, Deepika Dhiman, 14, has been studying at the school for three years now. She said “Mujhe Sushiksha mein aana bahut hi accha lagta hai, kyunki humein school se zyada acchi padhai yaha milti hai (I love coming to this school because I learn more than what I learn at regular school).” She adds that she has also learned English at the school and wants all the children of her village to be able to get the benefit of these classes.

Empowering the nation, one woman at a time

Sanjoli says that over the years, she has also seen many heartwarming moments as a result of her and Ananya’s efforts. She recalls one incident during an annual function at Sushiksha, where children conveyed messages of substance abuse through a play. “This is one of the core issues that they face in their homes, along with oppression,” she explains. “The curriculum is thus focused on alleviating this and encouraging the children to speak up.”

Another issue that the duo considers closely related to female foeticide is mental health. In their opinion, people’s emotional well-being is the precursor for many choices they make. Through their campaign Project Mental Health, they conduct sessions and engage people in conversation. During the COVID lockdown last year, they conducted a series of online talks as part of a seven-day course. Experts and psychologists were invited from all across India to shed light on topics related to mental health such as grief handling, spirituality, etc. In 2010, the duo organised the March for Mental Health, wherein peace walks were conducted in Karnal, Delhi and Jaipur.

All their efforts are so that one day parents support their children in seeking professional help, says Ananya. “Talking about mental health shouldn’t be shamed. I am working to see a counsellor in each school. I want for schools to focus on socio-emotional learning,” she adds.

Moreover, through their campaign Buland, the sisters along with their team of volunteers distributed 6,600 pads to 1,100 girls in Karnal who belonged to low-income private schools.

While the duo is now pursuing their studies in Australia, Sanjoli with her Masters of Social Work and Ananya with her Bachelors of Psychology, they say women empowerment isn’t something they limit to India, but it is a part of them.

Sanjoli was involved in the campaign #GirlsTakeOverParliament in Australia in 2019, wherein she and a group of others advocated for the cause of young women having a place in leadership roles in Parliament. As the societal fabric in India is frayed with this social evil, reports show that since the 1970s, the country is estimated to have about 63 million fewer women. Sanjoli and Ananya are aiming to change this.

Sanjoli says, “The question isn’t why we are fighting female foeticide. The question is, why did this problem arise in the first place? We want to create a world where women do not have to fight for their rights; not before birth nor after birth.”