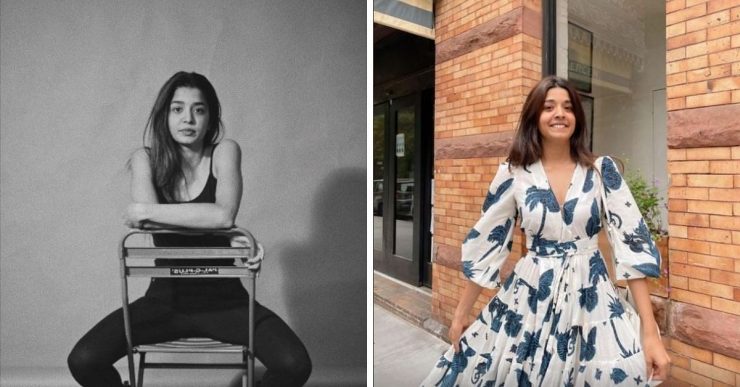 Khushi Jain recalls that as a teen, whenever she would eagerly check her phone for messages, she’d find herself staring at her wallpaper — a photo of ‘Keeping Up With The Kardashians’ Kendall Jenner, with whom she would later equate herself.

“She and I are both 5’10 and have the same initials. So I thought I’d have to weigh as much as her,” chuckles Khushi, who weighed 56.5 kg at her lowest. “I just wanted to be as thin. And every time I looked at my wallpaper, I was inspired to be like her.”

Now 21, she says this innocent and seemingly insignificant detail resulted in an emotional spiral.

Today, Khushi has overcome bulimia, anorexia nervosa, body dysmorphia, orthorexia, and says that her journey as a recovering ED patient has inspired hundreds of women who trudge the same path, trying to fit in the glamorous beauty standards of Tinseltown.

The former athlete discovered the joy of competitive swimming at the age of 10, which continued for almost a decade.

“My parents made me swim at district-level competitions from the age of 11 because even without training, I was pretty fast,” Khushi tells The Better India over a Zoom call from New York. She adds, “My mom was a state-level swimmer herself, and we used swimming as a family recreation activity in Gurgaon, where we lived.”

She went on to become a state and national-level gold medalist. “I won my first national-level silver medal in 2015, my first gold in 2016, and another few medals in 2017 at the School Games Federation (SGFI) national swimming event.”

Two years later, the bright student was accepted at Wesleyan University as a pre-med, but she transferred to NYU the following year to pursue a bachelor’s degree in Psychology, as well as a marketing degree.

However, the time she spent away from home spiked her eating disorder.

“I liked this boy who I thought would like me back if I was thinner. That winter, I started exercising into oblivion in the hopes that when I go back to college, he would notice me. The truth is that whatever I did, he still didn’t like me,” she says. “But this made me lose my energy, so when I went back to swimming, I lost all my races. At the time, I was so attached to the idea of not eating that I thought it would be better to quit swimming.”

Then the pandemic struck, and many immigrant students like Khushi had to return to India because of global lockdowns.

Remaining confined within the four walls of her house raised other problems. She says, “Not moving around much, I thought I didn’t deserve to eat because I wasn’t exercising my body. It became much worse when I started treating my disorder as a secret. I would lock myself in my room the whole day.”

The food sent to her room was thrown away, or worse.

Taking us through a day in her life, she says, “I would start with a serving of poha for breakfast, which I would take to my room and eat just two bites of. I’d find ways to suppress my appetite the entire day. But I would eat dinner because I wouldn’t be able to sleep hungry. Because my family saw me at the dinner table, they never questioned me.”

Here her comparisons to Kendall Jenner grew even stronger. When she started losing more weight, Khushi was scouted by a modelling agency in Delhi in May 2020, and by August, she had signed a contract. This, she says, “worsened” her eating disorder. “Growing up, everyone told me to pursue modelling because I was tall. I also wanted to act and thought this would be the right path. But my decision to quit was the best one,” she says, adding that she sought therapy in November 2020 and realised how modelling was taking a toll on her health.

Just a few months of being part of the profession changed her life, and by December that year, she gave it up. “When you starve yourself for a long time, you suppress your appetite. To remedy that, I had to exercise more and commit to a healthier lifestyle,” she says.

‘I had disorder thoughts very early on.’

Describing her journey to recovery, she says, “Google has everything if you type in your symptoms. But I was diagnosed with anorexia by my therapist in late 2020. I also had symptoms of bulimia, body dysmorphia and orthorexia.”

Khushi started eating full meals but relapsed in March 2021 when her weight plummeted to her lowest.

The biggest challenge on the road to recovery is to admit that you have a problem. She says, “The first barrier in my head was that if people knew about my ED, they would stop me from continuing what I was doing. And at the time, I didn’t want to be stopped. I wanted to keep starving myself. I was very attached to my skinny self since I was always healthy but never thin. I never knew my body could look like this.”

Khushi says that she was reduced to just skin and bones, and describes her eating disorder as akin to a ‘nasha’. Just as people with addiction have to go to rehab, those suffering from eating disorders also have to recover similarly, she adds. Her therapy sessions were scheduled once a week or once in two weeks, as and when she needed it.

Having been through it all she says, any fad diet that promises to help you lose weight instantly is not sustainable. “Yes, I have gained weight since I hit rock bottom. I am eating full meals, satisfied and nourished. And I am fully satisfied that my body has fats, rolls. I still exercise in moderation — that is key.”

In August 2021, Khushi started @Shetalksandeats where she posted a reel about her journey, which received half a million views. Today, her Instagram page, which has 22,500 followers, has resonated with women everywhere who endure eating disorders or the brunt of diet culture.

“When I was swimming, I was very diet-oriented. Certain foods were not allowed before a swim meet. I had to eat like an athlete. I prioritised healthy carbs and foods. I would inhale four aloo parathas steeped in butter and ghee after my practice. But I stayed away from burgers and pizzas,” says Khushi.

She adds, “Diet culture and beauty standards are billion-dollar companies that profit from creating insecurities for women and offering gimmicks to fix it. Waist trimmers, slimming teas, detox teas, ‘skinny girl popcorn’ and ‘lose-10 pounds-in-5-days’ gimmicks are so damaging to our mental health because we feel like if we eat this, we will be more worthy of acceptance and validation. We think we have to put ourselves through low-calorie diets to reach the ideal body type.”

Eating disorders are higher in females than males in India. Dr Udipi Gauthamadas, a specialist in treating eating disorders, was quoted in a report: “Various studies of Indian school children have shown that disturbed eating attitudes and behaviours affect about 25 to 40% of adolescent girls and around 20% of adolescent boys.” Additionally, an astounding 80% of women think they need to lose weight.

Khushi adds that diet culture is a dangerous slippery slope into eating disorders. “Diet culture also fuels the thought that ‘this [diet] is good for you’ because that body is idealised. In time, your body acclimatises to the fewer calorie inputs. At some point, you stop losing fat and start losing energy and reach a famished position.”

EDs make you a different person, she says, adding a message for those suffering currently, “There is light at the end of this tunnel. Recovery is possible — this is coming from someone who has gained her life back. When diet culture tells you that weight gain is the worst thing to happen to you, I am here to tell you that weight gain changed my life and made it 20,000 times better.”

She now swims for recreation but does not compete.