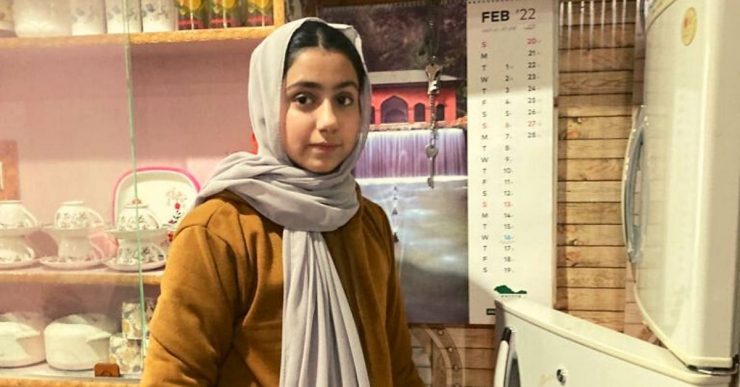 Holidays mean different things for different people. Indulging in the aroma of crispy browned onions—delicately fried in oil and chicken fat—wafting around the house, piercing the chilly weather of Kashmir is how Asma Bhat welcomes most of her holidays

For her, it is all about forgetting the worries of the world in the warm embrace of a comforting bowl of Gande Kokur, a Kashmiri chicken and onion curry that her grandmother lovingly prepared specially for her every visit.

“Gande Kokur is a very common Kashmiri dish and is often prepared in local households. I know how to make it too. But nothing beats the flavour my grandmother brings out in her curry. It’s akin to a warm loving hug,” says Asma, who learnt to cook watching her maternal grandmother stir the magic of flavours in a pot. “Kashmiri dal made with Moong gram is what I made the first time in my grandmother’s kitchen. That was the beginning of discovering my love for food,” she adds.

A 20-year-old college student who works in a local magazine as a civic reporter, Asma believes her soul lies in the culinary complexities of traditional Kashmiri cuisine, one that is fading with time. And that is why she decided to do her best to preserve the region’s culinary heritage through a venture called Food By Asma launched in early 2021.

A call of passion

Just like any other talented youngster, Asma often liked to participate in events and expand her skills. However, cooking is more than just a hobby for her. It is a passion she has carefully cradled and mastered over many years. So when her Class 12 came to an end and she found herself with some time on her hands, she decided to start a small business with whatever savings she had.

“I didn’t have a phone so I would use my mother’s to surf through the internet sometimes. It was one such day when I got to know about an exhibition happening nearby. Until then I was just cooking for my family and friends, but this was an opportunity to show what I could do outside of my circle. I went to my parents to seek permission who were slightly reluctant but eventually gave their support,” says Asma who participated in the exhibition and began to sell homemade authentic Kashmiri dishes.

That event was just the beginning as opportunities at other exhibitions and orders via her Instagram page began to pour in. “One of the prominent organisers of similar events even invited me to be their official food partner. That was a huge boost of confidence for me and inspired faith in my parents as well. They began to take my passion more seriously and extended their support,” adds Asma. Talking about her work, one of her customers, Syed Nasreena says, “The dishes she makes were once commonly prepared in homes or during special ceremonies but now things have changed. That tradition is slowly fading and being replaced by ready-made foods or fast foods available everywhere. Very few restaurants in Kashmir can preserve our culinary heritage. The newer generations don’t even know some of the names of these dishes and then you come across Asma, who is not only preparing these lesser-known dishes most authentically but is also trying her best to promote them amongst youngsters. That’s commendable.”

Although in its nascent stage, Asma’s venture has satisfied numerous food lovers across Srinagar. Post the restrictions, she has gathered around 50 loyal customers through online deliveries. After spending hours creating the intricate dishes, her food that ranges between Rs 50 to Rs 150, has the taste of a seasoned cook with a whiff of nostalgia, according to her customers.

Although a noble initiative, much like many small businesses, Asma’s business also had to navigate through the difficulties of pandemic restrictions. “There were several family emergencies, my parents were sick and I had to apply to colleges, balance my job as a reporter and the food business. It has been a little overwhelming but my resolve hasn’t dwindled. I want to keep taking orders via Instagram and do such exhibitions till I save enough to start my restaurant here,” says the young female entrepreneur who studies BA Psychology distance course at Amar Singh College, Srinagar.

Talking about her ambition to pursue a career in journalism and running her food business, she adds, “Journalism is my passion and I hope to try once again next year and enroll in a journalism course. But, food and cooking is a part of who I am and I will continue to balance the two in the years to come.”