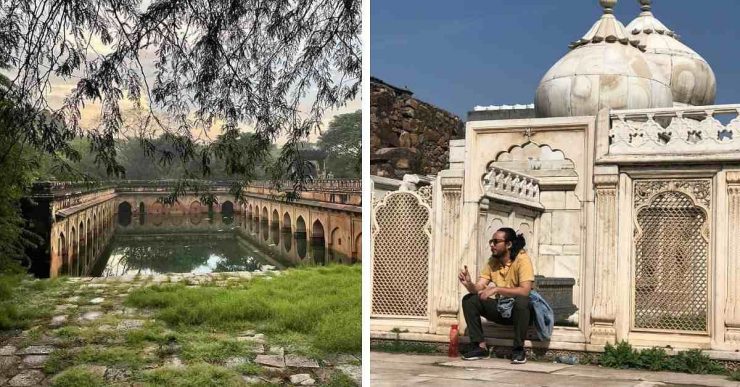 “At the age of 12, I was the youngest of a senior citizen coin club,” Shah Umair tells me as I marvel at his Instagram page, akin to a history book come alive, only more interesting.

He recounts how this passion for coins transformed into a desire to uncover the legend behind them. While around him, people were hustling and rushing through life, Umair decided he wanted to take a step back, and head down the ricketty slopes of time and into bygone eras.

“The world speaks of the Qutub Minar and the Taj Mahal,” he says, “but I want to tell the story of the unheard monuments, the ones that no one writes poems about.” And so Umair, a Calcutta boy, would make frequent trips to Delhi where he would pursue this passion.

In 2018, when he moved to the capital to start his own venture — a creative agency catering to lifestyle and fashion — it held a special kind of joy. He decided that if he was going to explore and unearth the stories of these monuments, he wanted to do it right.

“I began reading books, gazettes, and papers that could offer some insight into how the city was built, as well as the stories that lurked behind the stone facades,” he says.

Today at 27, Umair is retelling these stories.

Some legends you come across purely by chance, while others are by intent. The bridge belonged to the first category.

Umair and his group of friends were exploring the heritage of North Delhi, when one of them remembered reading a story about a bridge that was built 700 years ago in North Delhi.

On further exploration, they discovered that while they had been walking for miles trying to find it, they had been on it the whole time. “This structure was built by Tughlaq, who did a lot of conservation work in the Mughal era,” says Umair. “He repaired the Qutub Minar, re-excavated the lake of Khilji, and brought two Ashokan Pillars from Meerut and Haryana to the capital because he thought that they are an important piece of history.”

Through his research and books, Umair learned that this Mughal garden in the North of Delhi was constructed by one of Shah Jahan’s wives. On further research, he understood that this was also the place where Emperor Aurangzeb was crowned. “It was, for the first time, that a Mughal King was crowned in a garden instead of at the Red Fort. Along with being a sacred space, the garden was also where Indian wives of British presidents lived,” he says.

Shah Jahan’s daughter Roshan Ara was an important figure in Indian history. “She was powerful and constructed many structures in the city. She built this garden as a pleasure place for herself,” says Umair. Later, he says, she was also buried here.

The garden was built in the 1650s just outside Shahjahanabad. A narrow strip of open land is considered to be her exact burial place. Hemmed in by an enclosure of crumbling latticework, the chamber looks to the sky.

Before the city was built and converted into the bustling place it is, there was a lot of forest area. Umair conducts heritage walks wherein he takes people along trails through the city where they can drink in the gorgeousness of the place.

On this trail, viewers are treated to a magnificent sight — a mosque built in 1387, 300 years before the city of Shahjahanabad was established by Shahjahan. It is said that this mosque is the principal mosque of Firoz Shah’s city Firozabad and is one of the most northerly of the seven great built by Firoz Shah Tuglaq’s prime minister, Khan Jahan Telangani.

“Islam believes in an afterlife and people often find it difficult to get there,” Umair says as I ask him what a baoli translates to. “The concept of a baoli is where people can come to drink water. This act of serving people long after you are gone lets you have their blessings. It makes it easier for a person to attain an afterlife.”

As for the name, there is an interesting story behind it. “Initially called Daulat Khan’s Baoli, the name soon changed with time as certain workers known as Raj Mistri began working here. Hence the baoli started going by the name of Rajon ki Baoli.”

One evening, Umair was in the area for a meeting. On his way home, he discovered the tomb and the history lover in him couldn’t settle until he had explored it.

“The area in which it is situated is the only surviving and revived garden out of the 1,400 gardens built by Firoz Shah Tughlaq in Delhi,” he says. “The grave inside the tomb has not been identified.”

The story goes that the tomb complex was encroached upon as a camping place by Partition refugees who’d been living here for more than three generations. During the Commonwealth Games, the property was reclaimed by the Government and revived in the year 2010.

History has always told of Delhi’s valour. The battles that were fought, the fights that were won, the places that were conquered are an integral part of the city.

One such testament to this brave nature lies outside the Mehrauli Archeological Park. The 14th-century mosque has been fortified through the Mughal era, Umair points out. “Since Mehrauli was in the bordering town of Delhi, it had to be guarded during the Mughal invasion. When one sees the structure, they can notice that the tiles are preserved till today, as is the paint.”

Throughout this journey of unearthing tales that exist behind monuments, Umair’s constant has been a book by Lucy Peck — Delhi: A Thousand Years of Building.

In the course of reading, he came across an interesting story about Qudsia Bagh and later went on to explore it in detail. “Qudsia Begum — wife of Muhammad Shah Rangila laid out a beautiful garden complex adjoining the west bank of Yamuna,” he says. “She ruled under the impression of her son with her “chief eunuch” Jawid Khan, from whom she even made the Sunehri Mosque near Red Fort.”

Later, the palace complex was used by Shah Alam II to imprison Ghulam Qadir and in 1857, the palace was heavily damaged by the army and the mutineers during the revolt, which eventually ended the Mughal Empire.

It is said that Delhi is made up of seven cities, and King Tughlaq wanted to make a new city fort in a way that the Mughals couldn’t surpass, says Umair. So he started constructing this township of Tughlaq.

However, at the same time, Nizamuddin Auliya was constructing his baoli. Due to the worker shortage, Tughlaq asked for the fort to be made first and the baoli later. The workers would secretly work at night in an attempt to make the baoli and when Tughlaq found out, he was enraged.

He stopped the supply of oil in the area and Auliya began to burn lamps of water at the construction site for the workers.

“Everyone goes to the Qutub Minar,” says Umair. “But even though the tomb is in the same complex, people bypass it. But it is beautiful.”

He says every inch of the monument is engraved with Islamic inscription. “In contrast to many tombs that have domes, this one does not.”

Umair says he is on his way to exploring many more monuments. “Unearthing the story behind these structures is not easy. The primary source was written centuries ago, the demography has now changed,” he says.

“For instance, ask anyone where Akbar’s brother Adham Khan’s tomb is and they will shrug. But ask them where Bhool Bhulaiya is and they will point you in the direction of the tomb, as now it goes by that colloquial name.”

But, for this 27-year-old, uncovering lesser-known stories are his first love.

As you scroll through the online narrative that Umair has built through the years, you can’t help but reminisce about the magic of a period of royalty, vast history, and cultural significance that lingers in Delhi’s charm even today.