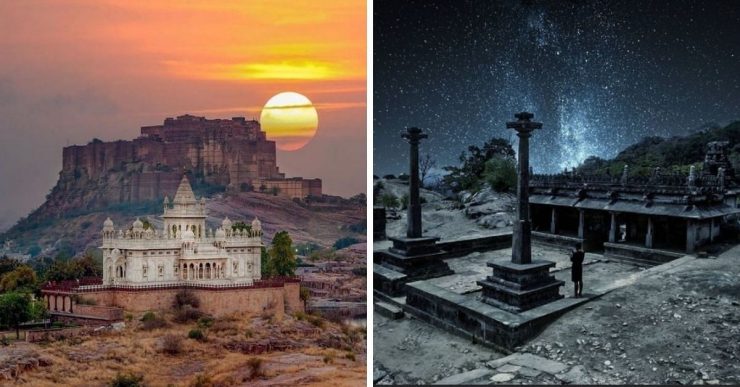 Many may be familiar with India’s architectural gems such as the Taj Mahal, Ajanta Caves, Charminar, Sun Temple or Gateway of India and the like. We have heard the tales behind their construction and have read of their stories of war and wonder in our History books. But it is the lesser-known structures that demand equal, if not more, admiration.

Be it the remote temples, partially demolished forts or even rock formations with beautiful sculptures — these offbeat monuments from different parts of the country have historical importance and artistic value.

A stunning marvel in marble, the Jaswant Thada is a cenotaph located in Rajasthan’s Jodhpur. It was built by Maharaja Sardar Singh of Jodhpur State in 1899 in memory of his father, Maharaja Jaswant Singh II. The structure serves as the cremation ground for the royal Rajput family of Marwar. Yet in the land of monuments, this place is often passed over.

This small palace is believed to have been built by the ruler of Orchha for his three favourite maids. It is partially ruined now but still gracefully carries the glory. The whole place has several such small and big architectural delights. One Instagram user aptly describes it as — “The town is poetry in stone.”

The Nagadevathe, or the 4 ft tall seven-hooded snake shrine, is believed to have been built to guard the palace treasures of the fort at Kavaledurga. This fort was the last stronghold of the kings of the Keladi dynasty, who were feudatory rulers of the Vijayanagar empire. The place is also known as a secret temple with several such sculptures.

Ratneshwar Temple in Varanasi was built extremely close to the Ganga and has a nine-degree slant. Even the Leaning Tower of Pisa in Italy tilts just 4 degrees. It is also called Kashi Karvat, meaning a temple in Kashi, which leans to one side. It is said that the temple was built by a certain servant of Raja Man Singh for his mother Ratna Bai. It is believed that it started tilting backwards when he declared that he paid off the debt to his mother by constructing this temple.

On the boulder-strewn banks of the Tungabhadra River in Karnataka lie the ruins of Hampi, home to countless architectural wonders. It is impossible to note every monument located in this place. In 1565, this metropolis was bigger than that of Rome. Hindu Virupaksha Temple, near the revived Hampi Bazaar, is a prominent spot here where a chariot is placed in front.

It is an ancient stepwell located in Jodhpur, the Blue City of Rajasthan. It is at least 250 years old. Today, it’s not well maintained but people visit the place to enjoy its architecture. Interestingly, this stepwell was full of debris for decades. Only recently has it been drained, cleaned and restored.

Resting on the top of a hill amidst a dense forest, one needs to climb a 5-km long hill to reach this destination. Several shrines of Virupaksha, Vijaya Vittala, Veerabhadra, Mallara and Bhuvaneshwari are housed in the fort which is a perfect blend of history and natural beauty. Beautiful views of the Sahyadri hills can be seen from the top of the fort.

There lies a picturesque palace in the middle of Man Sagar Lake in Jaipur city. This palace was built in 1699 and renovated by Maharaja Jai Singh II of Amber in the 18th century. Constructed using red sandstone, the Mughal architecture employed in the palace is top-notch. There are five floors in this palace out of which four lie underwater.

Built in the Solanki style of architecture, Adalaj ni Vav is a beautiful structure, descending five stories. It was built in 1499 to hold water and provide refuge to travellers. It is unique with three sets of entrance stairs, all of which meet on the first level down, at a large square platform. The stepwell was built to keep the harsh sunlight out and provide a cool refuge.

No doubt, the old temples of Karnataka’s Hassan district are an architectural wonder. Chennakesava Temple is the epitome of the grandest examples of Hoysala architecture in the town of Belur. The temple was built by the Hoysala ruler Vishnuvardhana in the early 12th century.