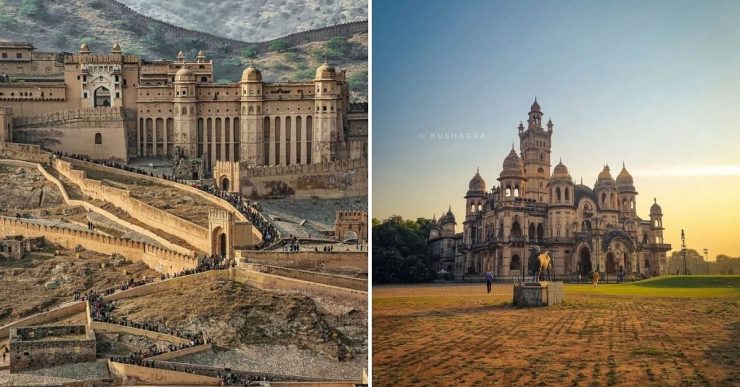 India is known for its diverse cultural heritage and rich history that draw tourists from around the world. The magnificent forts and palaces that dot the country are often hailed for their architectural elegance and rich socio-cultural heritage. They narrate the stories of love, war, victories and failures that define the colourful history of India.

Therefore, visiting these marvels would let one explore the mysteries and fascinating histories of the country. So, here is a list of some of the most stunning forts and palaces in India that you must visit: Situated around 11 km from Jaipur, Amber Fort or Amer fort is one of the most famous forts among the many in Rajasthan. Built in 1592 by Raja Man Singh, this fort is made of red sandstone and marble and includes various buildings of prominence like ‘Diwan-i-Aam’, the ‘Sheesh Mahal’ and the ‘Sukh Mahal’.

This 16th-century fort located in Amer, the former capital of the state before Jaipur, has influences from both Hindu and Muslim architecture. It has the Shila Devi Temple and the Ganesh Pol which is a gate that leads to the private palaces of the kings. Besides the fort has many pavilions and halls of great interest and other popular attractions. The iconic fort located in Hyderabad, Telangana, was built by Kakatiya Kings and once was the capital of the ancient Golconda Kingdom. The name Golconda derives from the Telugu words “Golla Konda” meaning “Shepherd’s Hill”. This unique fort had witnessed the rule of several dynasties like the Yadavas of Deogiri and the Kakatiya dynasty of Warangal.

The fort was known as a prominent diamond market in the 17th century and is world-famous for producing one of the finest gems in the world — the Koh-i-Noor Diamond. It houses several beautiful structures like beautiful palaces, gateways, drawbridges, temples, mosques, royal apartments, halls, and stables. Also, it houses the famous Fateh Rahben gun, one of the cannons used in the last siege of Golconda by the Mughal emperor Aurangzeb, to whom the fort ultimately fell in 1687. The fort’s fascinating history, its colossal structure and well-maintained gardens make it truly a delight for tourists.

Located on the banks of river Yamuna, the Agra fort is one of the first Mughal forts in India that was built under the commission of Emperor Akbar in 1565 and was later finished by his grandson Shah Jahan. The fort which was built as a military structure is surrounded by a 21.4 m high fortification wall. The British seized it in 1803 and it later became the site of a battle during the Sepoy Mutiny in 1857.

Built of red sandstone, this fort was also one of the first sites in India to get a UNESCO World Heritage Site listing, in 1983. Later following the exit of the British from the country, the fort was taken over by the Indian government and certain parts of it are reserved by the Indian army. Besides, the fort also houses a maze of buildings, including vast underground sections. Believed to have existed since the 6th century in Madhya Pradesh, the hill fort has a very long and turbulent history witnessing several rulers and violent attacks. The fort which was captured by the Tomars in 1398 was built to its current grandeur during the reign of the Rajput Tomar dynasty.

It houses several historic monuments, palaces, temples and water tanks. Amongst it, the most acknowledged palaces are the Teli-Ka-Mandir, built in the Dravidian style and Man Singh Palace, built by king Man Singh in the 15th century.

Other notable structures in the majestic Gwalior Fortress are the Karan Palace, the Gujari Mahal., the Jahangir Mahal and the Shahjahan Mahal. This iconic fort set atop a high hill is considered one of the largest forts in India covering almost 700 acres of land. Known as Chittorgarh or Chittor Fort, was ruled by the Mewar Kings for almost eight centuries before Mughal Emperor Akbar took over.

The fort houses several magnificent monuments like old palaces, temples, towers, and a reservoir, some unfortunately ravaged over centuries. One among them is the famous Vijay Stambha (Tower of Victory) which offers a stunning view of the city around. The Leh Palace also known as the Lhachen Palkhar is a historical palace that looks over the town of Leh-Ladakh amid the spectacular Himalayan mountain range. The massive nine-story stone structure was built by King Senge Namgyal during the 1500s and completed by the 17th century. The palace has huge walls and wooden balconies and is a typical example of medieval Tibetan architecture.

The palace museum has a fascinating collection of ornaments, jewellery, crowns and ceremonial dresses along with Tibetan paintings or Thangkas, which date back to 450 years. The structures surrounding the palace base include the Namgyal Stupa, the mural-filled Chandazik Gompa and the Chamba Lhakhang Temple carrying medieval mural fragments. The residence of the royal family of Baroda, the Lakshmi Vilas Palace was built by Maharaja Sayajirao Gaekwad III in 1890, with Major Charles Mant as the chief architect. The palace houses several historical structures like the MotiBaug Palace and the Maharaja Fateh Singh Museum building. It is also home to the Moti Bagh Cricket Ground, the offices of the Baroda Cricket Association and rare indoor teak floored tennis court and badminton court.

Built in over 500 acres, it is said to be four times the size of Buckingham Palace. The elaborate interiors boast well-maintained mosaics, chandeliers and artworks, as well as a highly impressive collection of weaponry and art. Situated in the heart of the Agartala city, the Ujjayanta Palace was built by Tripura king, Maharaja Radha Kishore Manikya of the Manikya dynasty, between 1899 and 1901. Later it was purchased from the royal family by the Tripura government in 1972-73.

Named by Nobel Laureate Rabindranath Tagore, the palace houses public halls, a throne room, a Durbar hall, a library, a reception hall and a Chinese room. Now a state museum, the three-storeyed mansion has a mixed architecture and is surrounded by serene Mughal gardens.

The Mysore Palace also known as the Amba Vilas Palace is one of the most prominent tourist destinations in Karnataka. It was built in 1912, in the Indo-Saracenic style, a combination of Hindu and Saracenic features. Commissioned by Krishnarajendra Wadiyar IV, the current palace is a replacement for the old wooden building destroyed by fire in the late 19th century.

Presently converted into a museum, the palace was constructed by Henry Irwin, a British architect. It is a three-storey stone structure in fine granite, grey in colour, having deep pink marble stones atop and a five-storey tower measuring 145 ft. Located in a small village, Padmanabhapuram in the Kanyakumari District of Tamil Nadu, the palace was once the seat of the powerful Venad Kingdom that ruled over the southern regions of the present Kerala state. The palace enclosed within a fort covers an area of 6 acres and represents the indigenous architectural features of Southern Kerala.

The Padmanabhapuram Palace is over 400 years old and is considered one of the largest wooden palaces in Asia. Wood is used extensively in its walls, roof frame, and also in structural elements such as pillars and beams. Besides, the palace interiors are decorated with antiques like Belgian mirrors, intricate carvings and paintings on its ceilings, the 17th and 18th-century murals, rosewood and teakwood carvings, and huge earthen urns and coloured mica on windows.