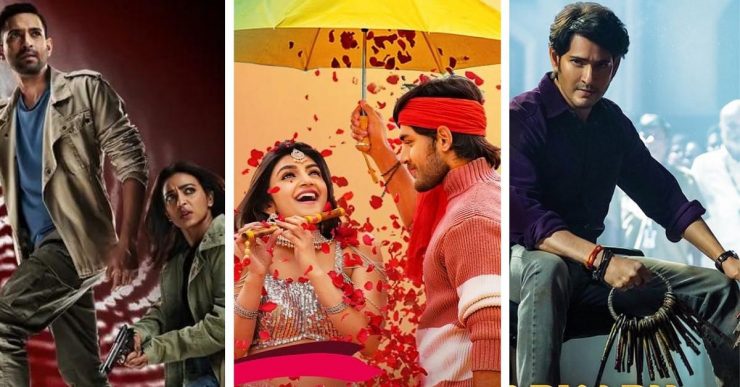 Along with some new releases that the OTT world has just witnessed, there are also old shows to catch up on. A fun weekend is in store for you. So, dive right in.

For all the thriller fans in the house who cannot keep their noses out of mystery, here’s something that you would enjoy. Forensic follows the trail of a detective and, as you guessed it, a forensic investigator. They are on the hunt for the face behind murders across the town.

“The dramatic twists and turns of the story, which are required for these genres, as well as the fact that it is unpredictable from the beginning, make it the most intriguing aspect,” writes Archika Khurana for The Times of India.

Two sides of the same coin are what the SSP of the police force’s personality is. One side is his noble professional one, while after duty it is the other side that emerges — one that sets on the trail to seek revenge for his brother’s death. Will the truth come to light? Will the smell of revenge deride his noble persona? Watch on.

The cop drama addresses a crucial aspect of Indian society — casteism. Set in the village of Pollachi, the film tells the story of one man’s quest to end atrocities against the oppressed classes. Officer Vijayaraghavan is on a mission for justice and equality.

“The writing is so effective as most of the dialogues deserve applause. Just when we think that things are going overboard, the makers justify it with interesting incidents and the setting in which the characters live,” writes Logesh Balachandran for The Times of India.

With mixed reviews to its credit, Sarkaru Vaari Paata is being applauded for its storytelling and plot. Though some reviews say the writing could be smarter or the gaps in the story lesser. The plot revolves around a boy’s parents who committed suicide due to their debts, only to have the boy grow up to be a money lender. The action drama unfolds when he is duped.

“The thought is hammered through a narrative that is entertaining at first, even though familiar and formulaic, but eventually gets preachy and overdrawn,” writes Sangeetha Devi Dundoo for The Hindu.

The Malayalam thriller weaves the story of how a bunch of daring cops from Kerala are out to nab the suspects of a robbery that happened in the state. The action film also portrays what goes into being part of the police force, hours of hard work and skill for clues.

“Without any sound and fury, the film manages to be a scary, edge-of-the-seat thriller. For those interested in police practices, this is unconventional yet exciting cinema,” writes Anna MM Vetticad for FirstPost.

India’s Line of Control (LOC) is a much talked about topic with so many significant events happening here. Those who wish to delve deep into how the border force strategically plans their moves, and how risky it is to be at this first line of defence will be amazed at this new season that portrays this.

“The eight-episode series celebrates the intelligence and courage of the Indian Army as it takes the viewer through numerous operations while building up to the final triumph,” writes Samriddhi Srivastava for India Today.

An old-school romance with a sportsperson falling in love with a girl he cannot marry as her father is not in favour of it. If you are a fan of cliche romances you’re probably bound to like this one. However, if you are looking for something more, you won’t find it here, say critics.

The Marathi romantic film that had its big-screen release on 29 April 2022, is now available on Amazon Prime. The drama tells the story of a politician who is all set to ace his political trajectory when a picture emerges and threatens to put everything at stake.

“The film is Amruta Khanvilkar’s first ‘in and as’ performance and she has pumped sweat and blood into this role,” writes Mihir Bhanage for The Times of India.

The detective flick traces the story of a person who happened to be at the wrong place at the wrong time. Will he be able to prove himself innocent? Watch as his daughter takes this case into her hands.

The film was celebrated post its release in 2019 for being one of the few which focused on the issues that are faced by the Dalit community in India. It continues to amass a fan following to date.

Forensic Review: A Twisted Whodunnit Thriller That Keeps You on the Edge by Archika Khurana, Published on 24 June 2022.

Nenjuku Needhi Movie Review: A deeply affecting and powerful film on caste disparities and inequality by Logesh Balachandran, Published on 20 May 2022.

Chandramukhi Movie Review: A decent love story which could have been a better political drama by Mihir Bhanage, Published on 29 April 2022.