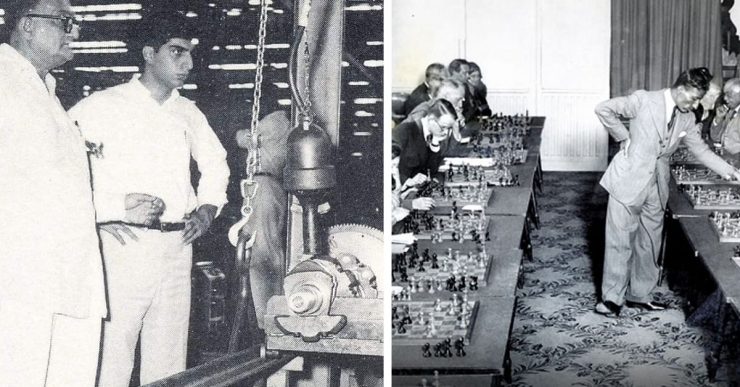 Browsing through the yellowed pages of history, there is a story in every line and behind every pair of eyes in a photograph. While one event may have changed the course of science, another tells of one woman’s struggle to fight stereotypes and shape the community.

Here are a few handpicked instances of when ordinary people believed in an idea and left behind a legacy.

1. The singer who reached space

From a very early age, Kesarbai Kerkar was celebrated in her village for her voice and people would wait to listen to her sing. This Indian classical vocalist then went on to win the title of ‘Surshri’ (Queen of Music) in 1938.

However, it wasn’t just Indians who were blown away by her performances. Ethnomusicologist Robert E Brown believed that her rendition of raga Bhairavi was one of the finest recorded examples of Indian classical music.

From capturing the hearts of people here on Earth, the echoes of her music even reached space when NASA’s space probe Voyager 1 carried one of her musical compositions alongside those of Beethoven and Mozart.

2. A chess marvel who stunned the world

One of the most prestigious events, the British Chess Championship, has always had the eyes of grandmasters. So when South Asian chess player Mir Sultan Khan won the Championship, not once but three times in 1929, 1932 and 1934, everyone was stunned.

What made his victory more noteworthy is that he wasn’t well versed in English and didn’t appear to have a prestigious educational background. But, what he lacked in theory, he made up in practice and is often referred to as ‘the greatest natural player of modern times’.

It is his intuition that helped him make the greatest moves.

3. The ‘Human Calculator’ who didn’t shy away from voicing her opinion

Shakuntala Devi was known widely for her prowess in multiplying double digits, and calculating figures no matter how complicated they seemed. But apart from her mathematical abilities, there was also her grit and opinionated self that never failed to surprise people.
In 1977, she wrote a book on homosexuality. A first of its kind in India, people often asked her how she could write this. Her response was simple, “My only qualification for writing this book is that I am a human being.”

4. A Master of many trades

As the first woman chartered accountant of India, R Sivabhogam was a highly educated woman. She was also influenced by Mahatma Gandhi’s ideologies and believed in leading a simple life. So, she would wear only khadi and travel by bus.

But Sivabhogam had never fathomed that she would script history in more ways than one. She was a nationalist at heart and during the Civil Disobedience movement taught khadi-based block printing and even boycotted foreign goods. For her disobedience, she was imprisoned but she used this time wisely.

While she was in prison, she appeared for the Graduate Diploma in Accountancy (GDA) exam and later went on to become India’s first female auditor.

5. The Father of the God Particle

In 1924, Satyendra Nath Bose wrote a paper wherein he derived a mathematical equation, ‘Plank’s quantum law of radiation’. What was astounding was that he did it without going the usual route of classical physics and this left scientists baffled.

The news of his work reached the ears of Einstein who lauded his efforts. The genius applied Bose’s ideas to a group of atoms and the results were termed the Bose-Einstein condensate.

6. A triad of maestros

The three were outstanding in their own right. While Mohammed Rafi is considered to be one of the greatest playback singers in Indian music, Manna Dey’s Pyar Hua Iqrar Hua won hearts while Kishore Kumar’s voice still finds its way to every radio even today.

7. Paving the way for women to shine

Right from asking girls who went to college in Trivandrum to join her at the palace for tea, to nominating women to high government positions, Rani Sethu Lakshmi Bayi empowered women like no other.

During her reign, she worked for the women of the state and saw to it that they were encouraged and given a firm foundation to reach high positions in male-dominated fields. She also advocated for the study of law to be open to female students. In time, the Women’s College in Trivandrum transgressed to include subjects like science, maths and languages.

8. A revolutionary who knew no fear

Suniti Choudhury was known as the youngest female revolutionary in India. Born to a middle-class Bengali family, she allowed her patriotism to lead her in her endeavours. She was often influenced by the talks by Netaji Subhash Chandra Bose and other leaders of the freedom struggle.

Her motive was simple — “What good is our current dagger-and-stick play if we shy away from real action?”
So when she was 14, she undertook the dangerous and risky task of shooting a tyrannical magistrate and then went to prison for seven years. After being released from jail, she went to Calcutta Medical College where she completed her MBBS.

When one thinks of Hindustani classical music, it is impossible to forget Ustad Bade Ghulam Ali Khan. He would blend classical music and create versions of his own that set him apart. So any word of praise from this maestro would be celebrated by the receiver.

When he told the legendary Carnatic vocalist MS Subbulakshmi, “You are not Subbulakshmi, you are Suswaralakshmi! (Goddess of pure note),” she was elated.

Her grandson started the Suswaralakshmi Foundation for Classical Music and Performing Arts in Bengaluru post. The Foundation is for budding artists who wish to make their career in the classical arts.

10. The legacy of the Tatas

In an Instagram post, Ratan Tata reminiscences his first visit to Jamshedpur, the city named after one of his ancestors Jamsetji Nusserwanji Tata.

The city was selected by Jamsetji as the location to build the steel plant and was named the current name in 1919 by Lord Chelmsford.

“When the earliest settlers arrived in what was then Sakchi in 1908, they were lured by the idea of making a home in a city yet to be created. The idea of present-day Jamshedpur started of course with the setting up of the Tata Steel Plant,” the Tata Group’s website reads.

In his post, Ratan Tata remembered his first visit to Jamshedpur much before he started working at Tata Steel. His post reads, “I remember the first time I ever visited Jamshedpur when I was on holiday from college. Mr R G Da Costa and Mr J D Chokshi invited me to visit the Telco plant and have a walk around the plant.”

Remembering the Father of the God Particle, Satyendra Nath Bose: Life, contributions, and his work with Einstein, Published on 4 February 2018.