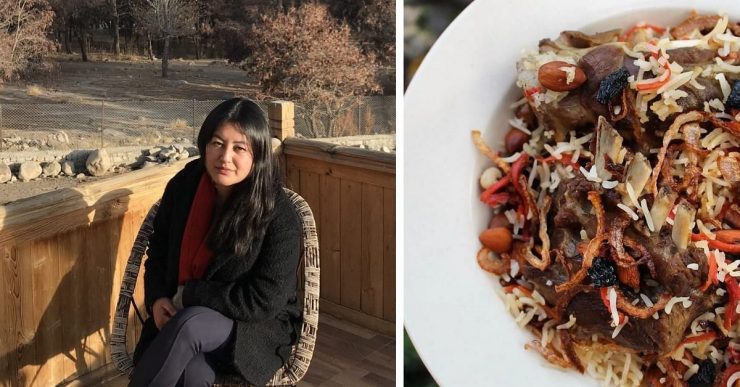 At the crossroads of old trading routes, and against the backdrop of the misty Himalayan range lies Leh — a city that has a history as old as time, entwined in the Buddhist culture and shaped by the people in the region. Amidst this melting pot of cultures, however, the traditional and authentic Ladakhi experience has evolved, and it is difficult to trace it back to its roots.

Kunzes Angmo, a food researcher and entrepreneur, is attempting to bring about a change in this respect with her revival of Ladakhi cuisine in interesting ways. “My roots are in Ladakh, and when we were being brought up in Srinagar, food was always a way for us to connect with the region,” she says.

In an Instagram post, Kunzes narrates that she spent most of her childhood in boarding schools and lived across Himachal, NCR, Chandigarh, and Mumbai. “[It] did nothing to shake that sense of belonging until I came to Ladakh after marriage, and felt like I had finally come ‘home’. And I became a local (though rather late in my little lived life) identifying with the feels and flavours of all that is Ladakh, of which most of it is still alien to me; yet so much my own,” she writes.

Through her Instagram page artisanalalchemy, Kunzes attempts to document the expanse of Ladakhi culture through elaborate feasts. A peek into the history of the dish, its heritage, its roots, and how it came to be included in the mainstream cuisine of the region is what sets Kunzes’ culinary display apart.

She exudes pride for the Ladakhi culture as she writes about these dishes. “Ladakhi food is misrepresented due to geo-politics,” she says about how people are on the verge of cultural genocide.

She decided to change the narrative by not only showing people a visual image of Ladakhi cuisine but also by taking them through the experience with experimental lunches. The lunch is not simply one that involves having a meal, but rather, knowing what you are eating, says Kunzes. Each lasts for about three hours, and the idea is to have food with a narrative. She takes the guests through why the ingredients are on the plate, how they came to be, what their cultural and culinary significance is, and what role the dish has played in the evolution of trans-Himalayan cuisine.

“When your land is taken away from you, your culture and food are the last things you can hang on to,” she says, referring to the misappropriation of Tibetan food as Ladakhi. “When an ethnic minority is facing cultural genocide, their cultural symbols like cuisine, clothes, language, traditions, etc are all the more important, and the onus is on the rest of us to give them credit where it’s due.”

As you visualise the rustic beauty of Leh in all its glory, here are 10 pictures that take you through the gastronomy of this heavenly city.

The dish has a history that competes with its taste. Having journeyed south from Yarkhand, it is a symbol of grandeur. The reason for this is its hero ingredient: rice. In the arid Himalayas, a good rice crop is considered premium. The flavour of the dish is enhanced with julienned carrots, nuts, raisins, big pieces of meat on the bone, and lots of animal fat. A fiesta in the mountains!

“Comfort food” is how Kunzes describes this traditional Ladakhi dish, which is said to have healing powers and was used extensively in days of old. The dish combines “rus-ku” (bone-broth) and “sngamphe” (roasted barley flour) into a serving that is a powerhouse of nutrients, amino acids, gelatin, collagen, and more. Additions can be made to the dish, such as “churpe” (local dried cheese) and dried black peas, and freshly ground black pepper to create variants. The original version is what is served to infants and aged members in a Ladakhi home.

This is a local wholewheat sourdough flatbread that is leavened overnight and baked on fire. During the process of making the bread, the principle of fermentation is used, wherein a natural starter leftover from a previous batch is used to bake the current batch. The lactic acid during the fermentation process leaves a sour taste, and as the process continues, the taste improves, finding itself a prime position in a traditional Ladakhi meal. To accompany the khambir, organic “ldums” cooked in milk and seasoned with dried wild onion chives are set on the plate.

There exists a Buddhist belief that encourages one to use every part of the animal that has been sacrificed. In the bowl, there is a delectable dish that is rooted in Ladakhi culture. What you see is sugu-chhutagi” (a bow-tie-like wholewheat dumpling/pasta cooked with goat trotters in its broth) and “skyu” (thumbprint pasta/dumplings cooked with mutton and some potatoes and shade-dried greens). The dish is so wholesome in itself that it requires very limited seasoning, as the flavour of the broth lingers.

Dumplings served in a sauce are what you see at first sight, but the controversy around this dish is splattered across the pages of bygone eras. Apricot kernels are somewhat a sensitive topic, as there are reports that suggest the kernels pose a risk of cyanide poisoning. To put people at ease, EFSA’s scientific panel set the safe level for a one-off exposure to these kernels as 20 mg per kg body weight. Brace yourselves for what comes next! A traditional Drapu dish has more than half a cup of the kernels. However, ethnic groups have adapted to these kernels, says Kunzes, and find nothing harmful about it. She suggests seasoning it with a ‘drizzle of fresh wild onion chives’.

Ladakh’s freezing temperatures necessitate meals that are high in carbs and fat, and help the body remain warm. But once in a while, these take a backseat and the local vegetarian cuisine is the star of the table. What you see in the picture is Skyu, made Hanu-pa style and seasoned with local tomatoes. Along with this, there is O-chutagi, finer and smaller, and made with more malai than milk. The dish is a vibrant spread of colours and there isn’t a single masala that needs credit for this. “No turmeric, no red chilli powder, no garam masala or any superfluous ingredients,” writes Kunzes. “It’s only freshly ground pepper for the heat and fresh cilantro and celery greens for seasoning. For added spice, it’s thangyaer (yellow Manali chili) chutney and Tibetan martza for the sides.”

Thukpa is a common dish in Ladakh and has diversified into numerous varieties, lending its taste to many specialties. This particular one is made from zatsod (Urtica hyperborea), one of the 25-30 different edible plants foraged from the wild in the area. The dish is also famous for busting a myth. Traditionally, it was thought that all forms of Thukpa were to do with noodles. However, the Thukpa Zathuk does not have any solid ingredients. What makes it so special then? “Sgnamphey” (roasted barley flour) is used to mildly thicken it and freshly ground black pepper is added for heat and some dried “chin-tse” (Chinese celery) and cilantro for seasoning. “Not to forget a dollop of butter!” writes Kunzes.

This dish, which has almost become synonymous with Ladakhi cuisine, has a little history behind it. Momos were initially brought in by Tibetan refugees into Ladakh, but over time garnered such widespread attention that they were adopted by the Ladakhi culture. “Tsodhmok” as they are called, are more than just dumplings filled with mince. Kunzes writes “Mokmok meals for most of us in Ladakh are a communal/family activity, where making the dumplings together is as much a part of the meal as eating it, often with small breaks between platefuls. Something that can never be replicated in a restaurant…”

When the people of Ladakh are in the festive mood, gearing up to begin the New Year, there is one element that stands out. During the festivities, the Losar table is decked with a “daerka” of sweet and salty khura, yak-schae, bosorok, topped with pichung and yarr. The food and celebrations reflect Buddhist cultures and practices and the family comes together to relish the delicacies.

Also known as the ‘monks thukpa’, this dish is only found in Ladakh. Different varieties of thukpa exist, each unique in its own way for either its cultural significance or for the way in which it is prepared. The Lama pakthuk is a pasta/dumpling that’s shaped like a small flat-fronted bullet, preventing it from becoming mushy when boiled.